City government is open for business. Not so for Archdiocese schools, which have the full day off, and the Philadelphia School District, running on a two-hour delay. 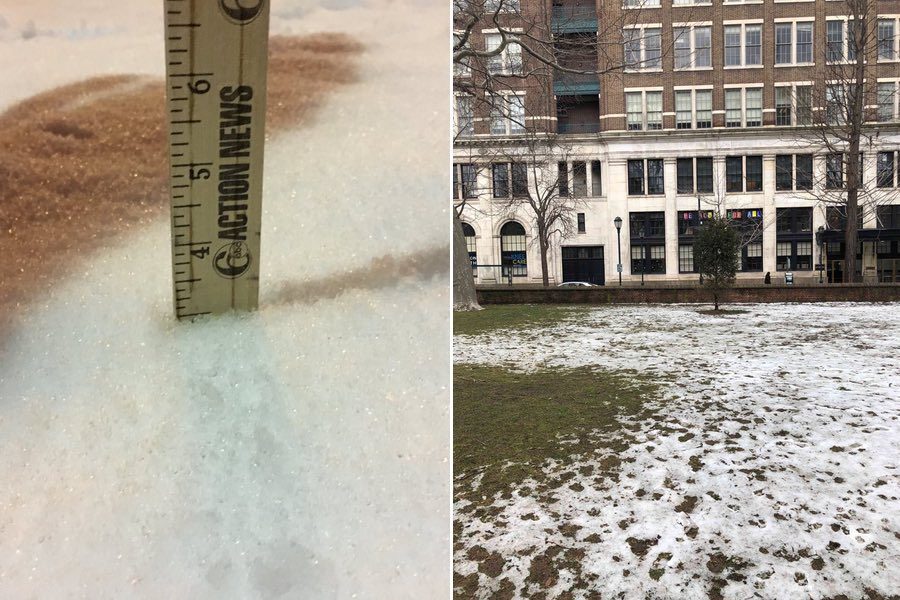 It’s a scene you’re probably accustomed to by now: Go to bed early, awake to find snow on the ground.

This Monday morning storm was much less severe than some of the past weather to come our way. (And we should be grateful: Our New York City neighbors were expected to get up to 10 inches last night into this morning.)

By 9 a.m. this morning, the storm had already cleared out and was making its way further to the northeast, leaving behind a trail of cold weather that we’ll have to deal with for much of the next week. Our local National Weather Service office showed a pristine radar and no weather alerts. Philly was largely spared the worst of this storm, with the airport reporting only one inch as of early Monday morning. Parts of Montco and Delco reported between 2 and 6 inches.

Still, there were some school closures and travel delays. Here’s what you need to know.

Catholic schools in Philly closed for the day. The Philadelphia School Disrtict is running on a two-hour delay. AB6 is reporting a few isolated closures throughout the suburbs, with most schools operating on a similar two or three hour delay.

All city buses are running without any specific weather-related delays.

The aiport reported some cancellations and delays. You’ll want to check your flight status before making the trek out to PHL.

And Amtrak Northeast Corridor service is running as scheduled. But Harrisburg service has been suspended, due to issues with overhead power lines.

The Philadelphia Streets Department was out on Sunday at 3 p.m. prepping for the storm. PennDOT had no active weather alerts as of 9 a.m. Monday morning. Refer to the department’s 511 page for specific road closure information.

Good news for anyone with a full trash bin. Trash and recycling service will continue today as originally scheduled.

In fact, the storm hasn’t affected city government operations much at all: The full municipal offices will be open for business on Monday.

A Code Blue Warning remains in effect from Sunday at 3 p.m. to protect people experiencing homelessness. Those warnings are typically issued when temperatures drop to around 20 degrees and make extra shelter beds available. If you see someone outside who appears to be suffering from the cold, you can call the city’s homeless outreach hotline at 215-232-1984.

The NWS says that while the storm has now moved on, it will leave an extended period of cold, dry weather in its wake, which could last through the entire week.