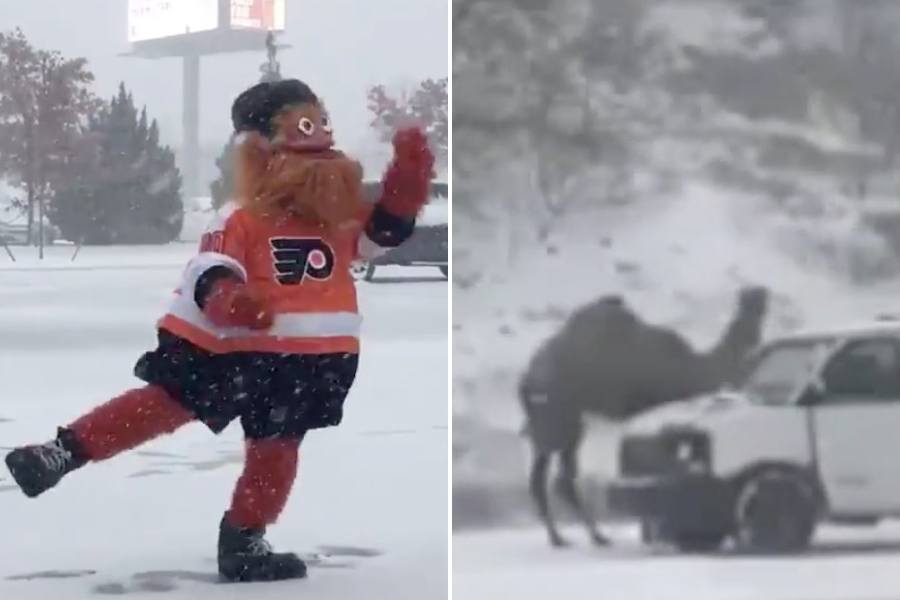 L: Baby Gritty’s first snowstorm via Twitter. R: A camel on the side of a highway in Montgomery County, via 6ABC Action News

Thursday’s winter event took most of us by surprise: What started as a lovely, late-morning flurry developed into all hell breaking loose on the streets of Philadelphia by early evening. The roads became covered in an unfortunate mix of ice and slush and snow, and from the angry skies above, freezing rain pummeled pedestrians mercilessly.

SEPTA bus service didn’t stand a chance on Manayunk’s treacherous hills. Regional Rail saw up to 90-minute delays. Virtually no one wanted to walk to their destinations — but Uber surcharges were through the roof. Those who drove themselves faced traffic gridlocks, and many — as in, literally hundreds of people throughout the Philadelphia area — got into accidents.

It wasn’t our finest day. But there were some upsides to the madness. For one thing, a camel was spotted roaming beside a Montgomery County highway. That’s right: a camel.

The camel, whose name is Einstein, was spotted walking near Route 309 north, near the Route 113 exit ramp just outside Souderton.

Apparently, Einstein was on his way to the Kimmel Center in Center City for a Jewish Federation of Greater Philadelphia event.

The organization claimed Einstein on Twitter and said that, sadly, he missed his event due to the weather conditions, of course.

Sadly Einstein the camel didn’t make it to the Kimmel Center this evening. His ride got stuck in the weather and decided it was best for him to go home. Thank you for everyone’s concern. Einstein is safe and happy to be headed home to Peaceable Kingdom Petting Zoo.

Einstein wasn’t the only creature spotted in the winter weather on Thursday: Our beloved Gritty experienced his first snow event, and it was beautiful — even if he referred to snow as “Zamboni dust.”

He danced in the powder. He drew snow hearts with his feet. He stared up at the sky, in love.

He couldn’t get enough.

And of course, as is par for the course these days, the people of Philadelphia went wild for Gritty’s first snow adventure.

Sure, the roads and sidewalks were a mess, the freezing rain was just awful, and we were all crying a little inside — but upon witnessing Gritty’s pure joy, we couldn’t help but see the world through his baby eyes.

I guess I am just going to cry as I watch videos of Gritty enjoying the snow, unsure of what emotion I am experiencing

I would die for you, Gritty

This is a special day. https://t.co/RddUSAGyrq

The only good thing about this snow is This.

I never thought another person calling snow Zamboni dust would warm my icy heart so thoroughly.