This South Philly Artist Turned Her Vagina Into Art

Katie Nocella says art depicting vaginas — a once-common subject that became taboo in the West — is more relevant than ever in this #MeToo age of empowerment. 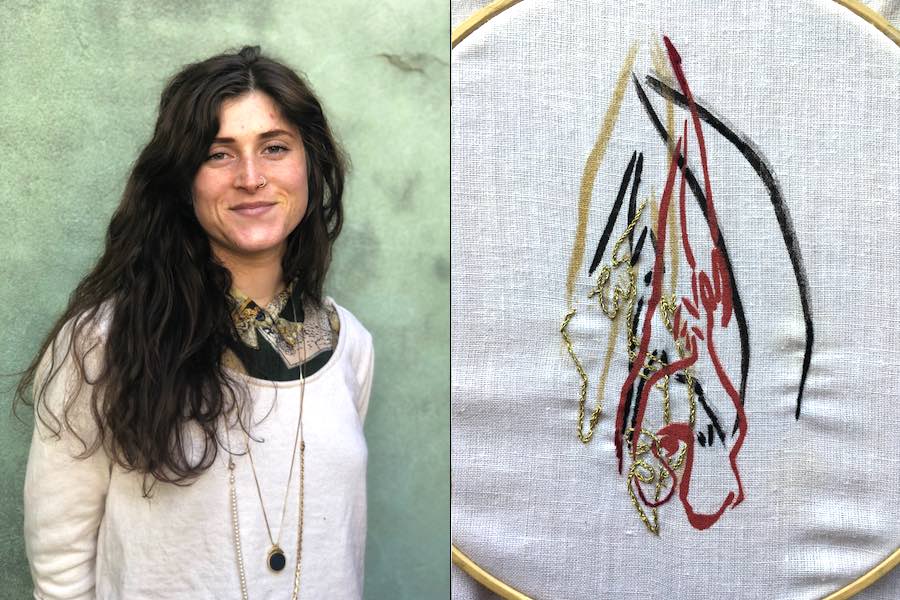 If you happen to be strolling through Passyunk Avenue’s boutique gallery Nice Things Handmade, you might spot some artwork on the wall and wonder, “Wait, is that a … Is that a … vagina?”

The vagina art is courtesy of the self-taught textile artist Katie Nocella, a recent South Philadelphia transplant. She based her prints, embroidery loops, and shirts on a series of drawings and studies she made of her own vagina every day for 28 days.

The vagina art project started after Nocella, 25, had a conversation with a female friend who had been painting pictures of fruit. The friend noted to Nocella that all of the fruit she had been painting — for whatever reason — all looked like vaginas.

“And I thought that was just great,” recalls Nocella, who moved here from South Carolina one year ago after finishing her degree in anthropology. “Things should look like vaginas in this phallocentric culture. A few years ago, a friend was doing a gender-communication survey, and she asked people to draw a penis and a vagina. Everybody’s drawn a dick before, right? But when you’re asked to draw a vagina, most can’t. Even I couldn’t draw one, and I have a vagina.”

So, Nocella sat down with a mirror every day for 28 days straight — she chose the duration since it’s the average length of a woman’s menstrual cycle — and drew her own vagina in a journal, using charcoal, marker, chalk, and Conté crayons. Nocella then took the drawings and did a sketchbook of studies, deciding which colors she wanted to use in the final products. And then she screen-printed her vagina art on vintage cloth napkins.

“The cloth napkins signify the idea of ‘a woman’s work,’” she explains.

She made a series of vagina art embroidery loops, screen-printing her vagina designs and using threads and string on top of the prints. There are even some silk shirts.

“A ‘debutante,’ historically, is a young woman considered socially ready to enter womanhood,” wrote Nocella in a description of her vagina art show. “This coming of age is usually celebrated at debutante ball, where she would ‘debut’ herself as a woman. In this culture the criteria for becoming a socially mature woman means that she is ready for marriage and child-bearing. Although my parents never pushed this idea, these expectations were not foreign to me, growing up in the South. Today, though, that expectation is changing. Women are capable of doing more. We, as women, are aptly ‘debuting’ ourselves within this cultural shift.”

Of course, vagina art is nothing new. Artists have been fascinated by and depicting vaginas for centuries.

Vagina art has its own section on Etsy. It has a tag of its own on the Huffington Post. And Facebook has gotten quite a bit of flak for its censoring of the 1866 French oil painting, L’Origine du Monde (“The Origin of the World”).

So, yes, vagina art predated Katie Nocella’s own birth by many centuries. But she believes this type of work is more important and impactful now than it ever was before.

“Women are realizing their own potential and abilities,” she observes. “We are now showing more action.”

She points to the #MeToo movement and the last two years of women’s marches to insist that the times, they really are changing. Hell, the New York Times just ran a big feature on women and their vagina selfies.

Nocella says reception to her vagina art has been generally good, but there was one older man in the Passyunk Avenue shop who said he was uncomfortable with it.

“‘You’re gonna have to show penises if you’re going to show this,'” she remembers him complaining to a store manager. “He was missing the point. There are penises everywhere already. People draw penises on the wall as a joke. When was the last time you saw a vagina?”

The artist says that the reaction to the idea of vagina art tends to be a “generational thing” and not just gender-specific. I showed Nocella’s art to a couple of middle-aged men who thought it was just too much, while all of the millennial women I showed it to thought it was the best thing ever. But a middle-aged woman I told about the show just rolled her eyes. “Sounds like it’s a gimmick to me,” she said.

When she’s not creating and showing vagina art, Nocella works at a couple of South Philly boutiques. She also teaches machine sewing and embroidery to kids at Butcher’s Sew Shop.

Next up, she’s launching her own design company, Nocella Designs. And she’s planning to work with a friend in China to design a new 21st-century tarot-card set based on female roles in culture and society.

“Debutante” runs through September 8th at Nice Things Handmade. Individual pieces in the show range from $20 for some of the cloth napkins to $120 for a silk shirt. Nocella says she’s donating 50 percent of the proceeds to Camden Delivers, an organization that provides women with health and social programs.