Brace for what will likely be a messy evening commute. (And please, please do not try to drive through flooded roads.) 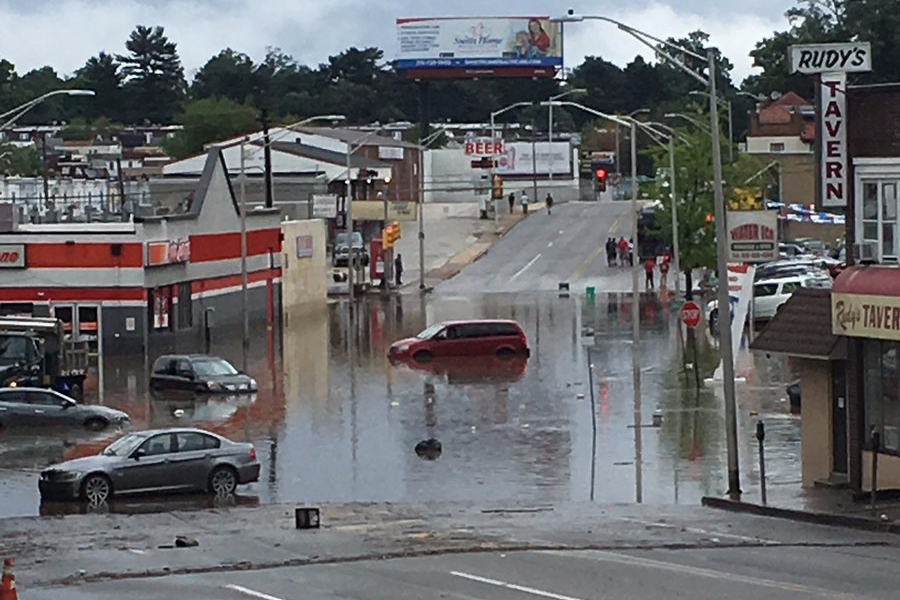 Rain has drenched parts the region in problems on Monday.

As forecasters warned us in the morning, downpours have prompted flash flooding in the Philadelphia area — and even areas that normally remain relatively dry are suffering.

Take, for example, the King of Prussia Mall, where flooding has affected the lower level plaza (near Nordstrom and Primark) — and a parking garage.

A spokesperson for the mall told NBC10 that about 55 out of the 450 stores in the lower plaza are experiencing flooding. A woman reportedly had to be rescued from her SUV in the parking garage.

The mall is still open on Monday – but customers looking to visit should call ahead to see if the store they want to visit will be open.

Plus, several streets in the area were also experiencing flooding on Monday afternoon (like Pennsylvania 320 between Upper Gulph Road/Old Gulph Road and Arden Road), so you might want to think twice about heading that way at all.

Meanwhile, Upper Darby commuters should also beware. Cars on Marshall Road, which has practically turned into a river, have been nearly submerged, and police have reportedly had to make several rescues.

The Pennsylvania Department of Transportation offers a list of other area roads closed because of flooding:

Otherwise, to see if a road near you or on your evening commute is flooded and closed, check 511pa.com. Be sure to select “incidents” on the map, and look for the red triangle warning signs. To check if a creek or river near you is in danger of flooding, check out this interactive map on weather.gov.

The Pennsylvania Department of Transportation is reminding drivers not to attempt to cross flooded roads. (Futile attempts have been documented on Twitter.)

⚠️ Due to flooding, many roads throughout PA are closed. We strongly encourage people to use https://t.co/xBnMAKHyVI to check the latest updates and road closures. #DriveSafe #ArriveAlive #TurnAroundDontDrown pic.twitter.com/3oDEgwapsy

SEPTA appeared to be operating as normal on Monday, but anyone taking public transportation might want to check System Status online before waiting for a bus, trolley, subway or train. If you’re scheduled to fly via the Philadelphia International Airport on Monday, also be sure to check your flight status before you get to the airport.

The Philadelphia region was drenched with between 3 to 5 inches of rainfall on Monday morning, according to the National Weather Service. For the most part, rain bursts are expected to slow on Monday evening, though lingering storms could produce heavy rains at times, so remain alert.

The area remains under flood warning until 4 p.m. on Wednesday. Forecasters and predicting showers and thunderstorms on Tuesday as well. Then we’re likely back to sun and high temperatures on Wednesday.

Here’s a roundup of some of the worst flooding in the area on Monday.