The Era of the Comcast Joke Is Officially Over

Our long-derided hometown cable giant has become one of the most important and influential companies in the world. It’s time for Philly to embrace that. 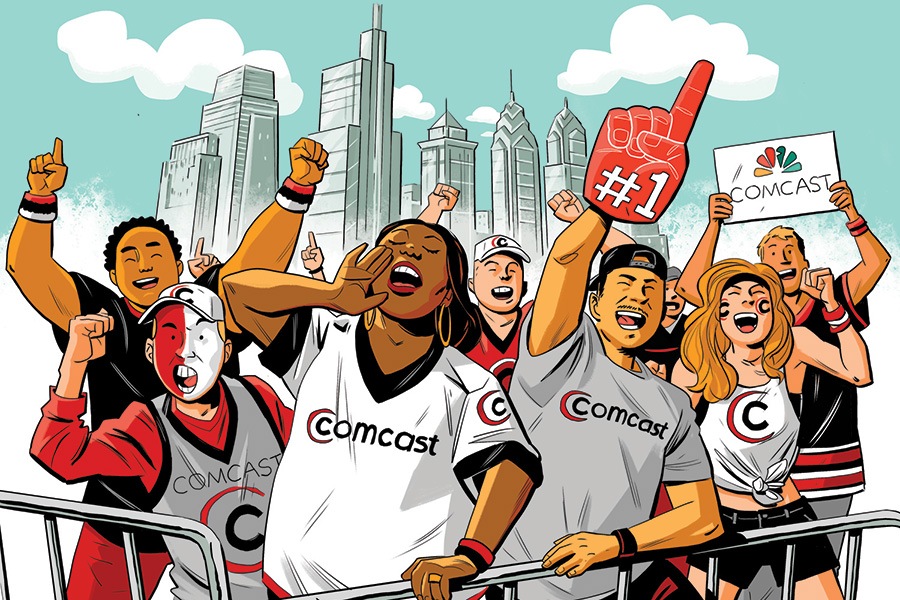 For much of the past year, cities across America — ours included — have been falling all over themselves attempting to land Amazon’s second North American “headquarters.” (I use quotes because you can no more have two headquarters than two heads.) We’ll give you tax breaks! cities promise. We have amazing tech talent! they boast. We made you a really cool video … if you like it, we can send you a mixtape, too! For Seattle, where Amazon is actually headquartered, this must feel a little like having other people swoon over your super-hot husband: Flirt all you want, folks; at the end of the party, he’s coming home with me.

Which raises a question: Why doesn’t Philadelphia take similar pride in Comcast?

After all, while Amazon has been conducting the world’s most demeaning reality show, Comcast has been engaged in its own drama, battling Disney for control of valuable pieces of 21st Century Fox. That Brian Roberts’s media behemoth ultimately bowed out is beside the point; just by being a player in the game, our once-dorky hometown cable company has made clear that it’s one of the most important and influential companies in the world. Which is actually what it’s been for a while.

Let’s review, shall we, some of what Comcast has accomplished in the past decade or so. In 2008, the company built a shiny new tower that not only transformed Philadelphia’s skyline but is now home to many of its 9,000 local jobs. A couple of years later, it acquired control of NBCUniversal. In the past few years, it has purchased the DreamWorks animation outfit and launched its own mobile service. And it will soon start moving employees into a second skyline-reshaping tower, this one housing the tech talent it’s using to compete with the Googles and Facebooks (and Amazons) of the world. And it’s done all this while behaving as a solid corporate citizen. You want diversity? Comcast exec David L. Cohen recently told me that more than half of the company’s 164,000 employees now report to either a woman or a person of color.

Look, I don’t love everything Comcast does. I’m no fan of its position on net neutrality. And while I’ve had my frustrations with its customer service, I give Comcast credit for taking the issue square on in recent years — and making progress.

It’s a particularly Philadelphian trait to assume that anything connected to Philadelphia probably kinda sucks. What do you say we get past that, people? What do you say we wear our Comcast stripes proudly? Because my gut tells me that in really cool cities like Seattle, they hear “Comcast” and say … Hey, wouldn’t it be awesome if they opened a second headquarters here?

Published as “Kabletown RIP” in the August 2018 issue of Philadelphia magazine.