The junkyard near the Kensington/Port Richmond border must reduce the height of its scrap piles to 10 feet before it can reopen. 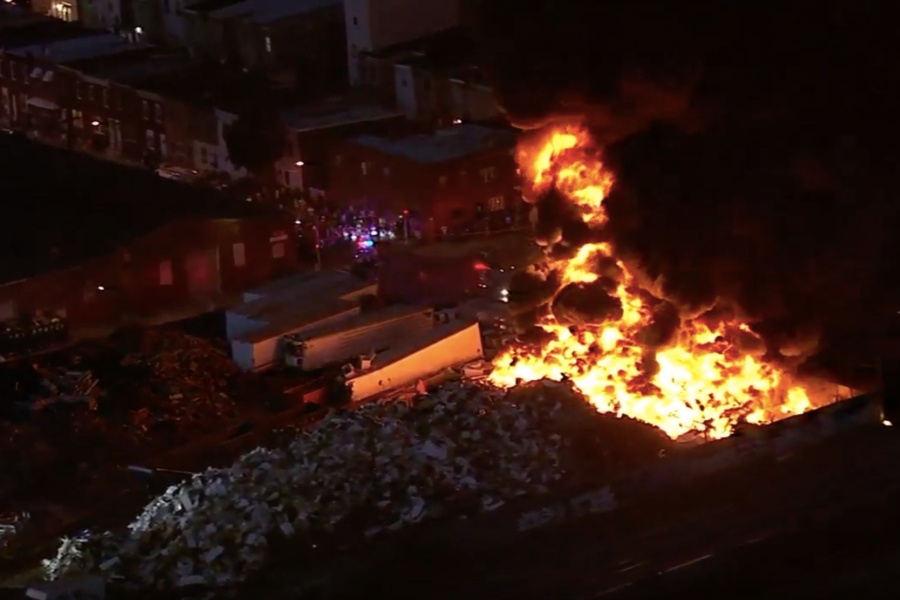 The junkyard where a massive, four-alarm fire broke out on the Kensington/Port Richmond border earlier this month has been ordered to close by the city.

Philly.com reports that the Department of Licenses and Inspections has forced the shutdown of Philadelphia Metal and Resource Recovery, located at 2200 East Somerset Street. Before the scrapyard can accept new materials, it must scale down its scrap piles to 10 feet and clear fire lanes between those piles, L&I spokesperson Karen Guss told the publication.

The site had reopened for roughly two weeks after the fire, which broke out around 8:30 p.m. on July 10th near the intersection of Tulip and East Somerset streets. The blaze consumed nearly a full block and produced thick plumes of smoke that could be seen for miles. It took firefighters three hours to get the flames under control; one firefighter suffered a non-life-threatening injury from a fall at the site of the fire. Still no word on the cause.

Environmentalists have called the blaze a “preventable air pollution disaster.”

Before the fire, scrap piles in the junkyard were reportedly as high as 30 feet — three times the size that L&I is now requesting. The Clean Air Council and the New Kensington Community Development Corporation said that officials should have kept a closer eye on the junkyard, which had received multiple L&I code violations over the last 10 years. Those violations include excessive tire storage, mislabeled containers and an alleged unsafe fence, according to public records.

Someone monitoring air quality near the #Philly fire at a Kensington scrapyard tells me the PM2.5 ug/m levels are 260. The 24-hour EPA standard (which is way too high) is 35. Today was already an air quality alert day in Philly, partly due to wildfires out west.

The city had taken the company that owns the property, BMJ Holdings, to court prior to the fire and is seeking “strict” fines and penalties, per a city spokesperson. Two Common Pleas court hearings have reportedly been held since February, and the next is scheduled for August 30th.

Earlier this month, a city spokesperson said that the company had been given time to address the L&I violations.

“The city has been very responsive and certainly has not ignored this, but instead has pursued this matter as aggressively as possible in light of the violations,” the spokesperson said. “The city is hopeful that the court process will lead to a successful resolution, the correction of the violations, and that the court will impose strict fines and penalties against this owner for the continued noncompliance at the next hearing on August 30, 2018.”