Plumes of smoke were still rising from the site of a four-alarm fire on the Kensington and Port Richmond border on Wednesday morning. 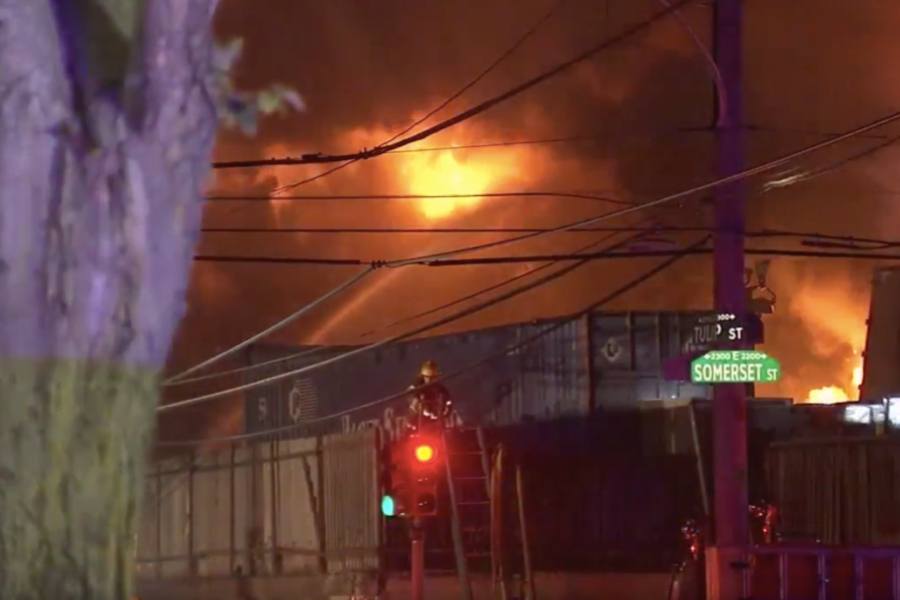 Firefighters battled and calmed a massive, four-alarm blaze on the border of Kensington and Port Richmond on Tuesday night.

The fire started around 8:30 p.m near the intersection of Tulip and East Somerset streets. Flames and smoke could be seen for miles as the blaze consumed a junk yard and spread to nearly a full block.

Firefighters battled the flames for nearly three hours, finally getting the fire under control around 11:30 p.m. One firefighter suffered a non-life-threatening injury from a fall at the site of the fire, according to 6ABC.

4 Alarm Junk Yard Fire with multiple special calls. 2nd Alarmers are in service with 6 rehab stations as well as a rehab post on a SEPTA bus for cooling.@PhillyFireDept @IAFF22 pic.twitter.com/bJMVYyYGkC

The cause of the fire has yet to be determined. Authorities are investigating.

Officials say the blaze was contained to the site of the junk yard, which contained mostly metal, wood and paper, per Philly.com. As a precautionary measure, residents were evacuated from Lehigh Avenue shortly before 10 p.m., when the fire reached four alarms.

Smoke continued to rise from the site on Wednesday morning.

A lot of smoke still coming from the junkyard at Somerset and Tulip in Kensington. Officials called for four-alarms last night. Fire is under control but crews with a lot of work to do. @KYWNewsradio pic.twitter.com/dqzH92y4vQ

NBC10 reports that the fire is causing some traffic troubles in the area on Wednesday morning: rising smoke is reportedly slowing down southbound traffic on I-95.

The Clean Air Council is monitoring whether the fire caused potentially hazardous smoke particles, according to the news organization. Some residents have complained of the smoke.

Port Richmond friends around where the Somerset fire was, I highly advise you to wear something over your nose and mouth if you have to go outside. The smoke is reaallllyy bad and I feel horrible right now. My lungs are very unhappy.

there was a fire at a junkyard in port richmond last night, and we woke up to the smell of burning plastic throughout our house. not cute

Onlookers shared footage of the fire to social media.

@PhillyFireDept major fire in fishtown near Allegheny and Martha pic.twitter.com/flzhODfevG