The Italian Market Festival to Eagles Fans: Grease Up!

The festival is slathering on extra lard for this year’s greased pole competition after Philadelphians made a national spectacle of pole-climbing following our Super Bowl win. 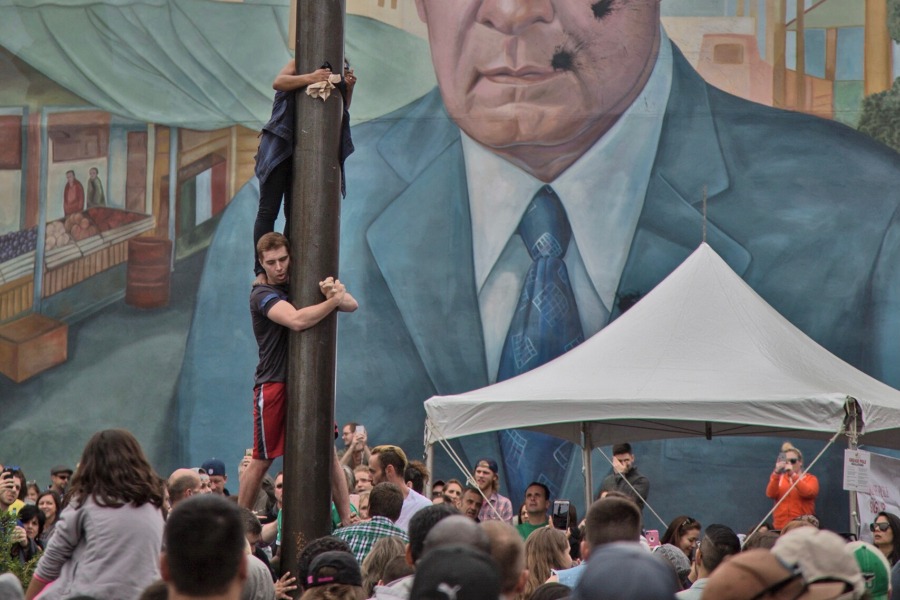 Look out, Philadelphia: The South 9th Street Italian Market Festival is this weekend, and you know what that means — greased poles.

Or, more specifically, one 30-foot greased pole: that of Philadelphia’s famed greased pole competition. After all, for those who aren’t in the know, there’s a reason why our Eagles fans were so good at climbing Crisco-greased light poles after our Super Bowl win earlier this year — we do it competitively every year at the Italian Market Festival!

In Italy, the tradition of teams trying to climb a greased pole topped with meats, cheeses and other splendid gifts is called albero della cuccagna. This year in Philadelphia, organizers are loading double the grease on our pole, which stands in a piazza at 9th and Montrose streets. Michele Gambino, the festival’s business director, told Billy Penn that they’re “going to extra-lard the pole because there’s been so much attention” after the Super Bowl festivities.

Gambino also said that organizers are looking to stick an Eagles flag at the top of the pole, and those who actually climb all the way up will have to bring it back down to the ground.

The competition begins at noon on both Saturday and Sunday. Anyone interested in climbing can do so by handing in a registration form (which you can print online) at the Visitor Center at 919 South Ninth Street. You must sign up in teams consisting of 8 to 12 people. Plus, you have to be 18 years old, sign a waiver and take a sobriety test. Those rules were introduced last year, after the competition returned following a 20-year hiatus.

There’s nothing like watching the competition in person, so to get you pumped up, here are some few videos from last year.