Riders read out the names of Pablo Avendano, Emily Fredricks, and nine other cyclists killed in motor vehicle crashes throughout the Philadelphia region in the last year. 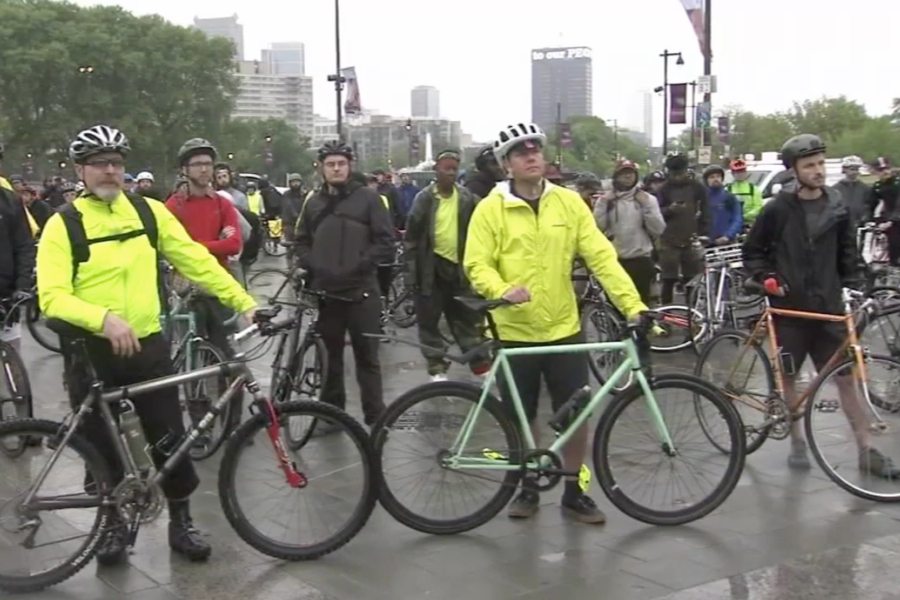 Wednesday’s showers didn’t stop hundreds of cyclists from attending the annual “Ride of Silence” to honor those who have lost their lives to motor vehicle crashes in the Philadelphia area.

Cyclists showed up at the Philadelphia Museum of Art around 7 p.m. to ride en masse less than a week after Pablo Avendano, a 34-year-old bike courier from Point Breeze, was struck and killed by an SUV on Spring Garden Street.

During a pre-ride ceremony, cyclists read Avendano’s name along with those of ten other riders who were killed in the Philadelphia region in the last year. That includes 24-year-old Emily Fredricks, who was struck by a trash truck during her morning commute on Spruce Street in December.

Both Avendano and Fredricks were riding in bike lanes when they were hit by cars — but neither of those lanes were protected by barriers (like plastic delineator posts) between cyclists and vehicles. In fact, Philly is home to just 2.5 miles of protected bike lanes, which have been shown to increase ridership and safety, and cyclists have renewed their pushed for more in the wake of these recent high-profile tragedies.

Ride of silence for those we lost #bikephl #VisionZero @bcgp pic.twitter.com/8utlM9pGPr

Cyclists were encouraged to wear helmets and bicycle lights for the eight-mile “Ride of Silence” route, which began at the front steps of the Art Museum and proceeded down the Benjamin Franklin Parkway, around City Hall, to Independence Hall, West Philadelphia via the Walnut St. Bridge, and then back to the Art Museum via the Spring Garden Street Bridge.

To support the ride, Indego Bikes offered day passes for a discounted rate of $1 on Wednesday and waived usage fees for the duration of the event.

In solidarity with the #RideofSilence, Indego will be offering day passes for $1 tomorrow. We will waive usage fees for the duration of the ride.
Day pass must be purchased online at https://t.co/2MfvSZnj4P
Use promo code: RIDEOFSILENCE
To learn more go to https://t.co/irvfTRZ1wm

The Bicycle Coalition of Greater Philadelphia, which organized the event, shared a GoFundMe page for Avendano’s family this week. The fundraising page has brought in nearly $11,000.

Hey #bikePHL, here is the official @gofundme for Pablo Avendano's family. Please help if you can. https://t.co/O3THiPRmV0

Below are photos from the ride on Wednesday:

Hundreds came out to this year’s Ride of Silence in Philadelphia.

A post shared by Victim Services of South Phila (@victimservicessouthphilly) on May 16, 2018 at 4:00pm PDT