The Bicycle Coalition of Greater Philadelphia called the timing “a cruel irony.” 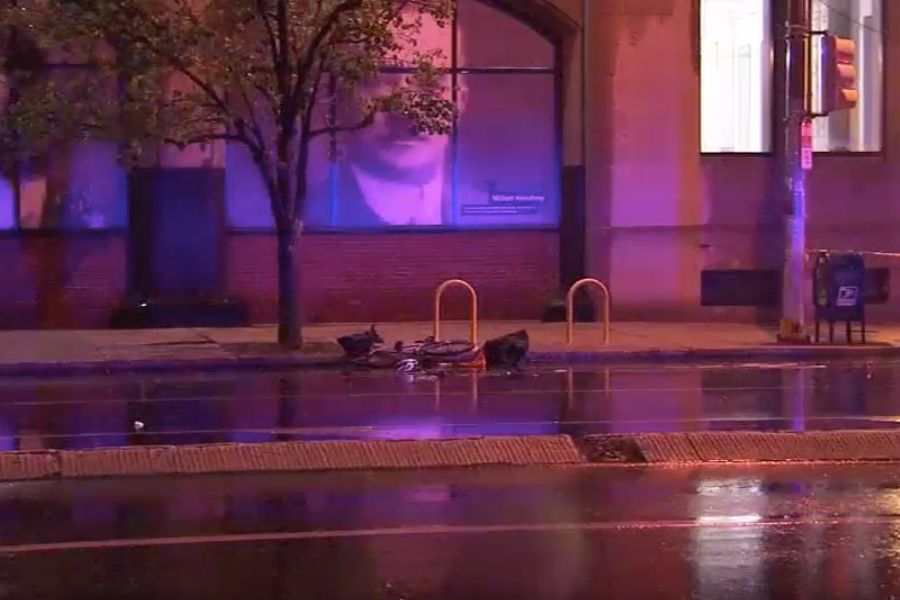 Pablo Avendano, a 34-year-old Point Breeze resident and bike courier for the food delivery company Caviar, was struck and killed by a car on Spring Garden Street on Saturday evening.

His death comes just days before Philly cyclists are set to hold their annual “Ride of Silence” to honor those who have been killed in motor vehicle accidents. The Bicycle Coalition of Philadelphia, which organizes the event, has called the timing of the tragedy a “cruel irony.”

Police say Avendano was traveling east in an unprotected bike lane on Spring Garden Street around 7:45 p.m. when the driver of a Mitsubishi SUV (who was also heading east) struck him while crossing the intersection with 10th Street. Avendano was dead by the time police arrived at the scene of accident. The driver, who reportedly remained on the scene of the crash, has not been identified. It’s not yet clear whether charges will be filed in the incident.

The makeshift memorial in front of 990 Spring Garden for Pablo Avendano. pic.twitter.com/rqVaqU3tzu

The Bicycle Coalition says the Spring Garden Street bike lanes are among the most-traveled east-to-west bike lanes in the city. Cyclists are pushing the city to protect those lanes and others in the wake of the recent death. Right now, Philly is home to just 2.5 miles of protected bike lanes (with plans for more in the works — though not on Spring Garden Street).

In a statement, a Caviar representative told Philly.com that the company was “deeply saddened by this news” and that “our thoughts are with Pablo’s family.” Avendano also worked for the Philadelphia-based Sparrow Cycling Couriers, which honored him in several social media posts this weekend.

This is for our dear friend and rider Pablo who was hit and killed on his bike last night on spring garden. He was a teacher, an activist, a great rider, and a true friend to all of sparrow, the messenger community, and philly as a whole. He spent all of yesterday helping run our alleycat checkpoint, guiding people to their next stop. He was instantly friends with everyone he meant. He’d talk to you like you were the only person that mattered in that moment and was truly a special special person. He will be very missed. We’re closing for the day, feel free to stop by the sparrow office today if you want company or want to talk. Rest in power bud, we love you forever #725

The Bicycle Coalition’s Ride of Silence will take place on Wednesday at 6:45 p.m. Following a 15-minute pre-ride ceremony, the eight-mile ride (which is expected to take roughly an hour) will begin at the foot of the front steps of the Philadelphia Museum of Art. Helmets are required.

For the full route and more information, check out the ride’s Facebook event page.