Could Protected Bike Lanes in Center City Have Saved This Cyclist’s Life?

Bikers have long pushed for protected bike lanes on Spruce Street, where a 24-year-old woman was struck and killed by a trash truck on Tuesday morning. 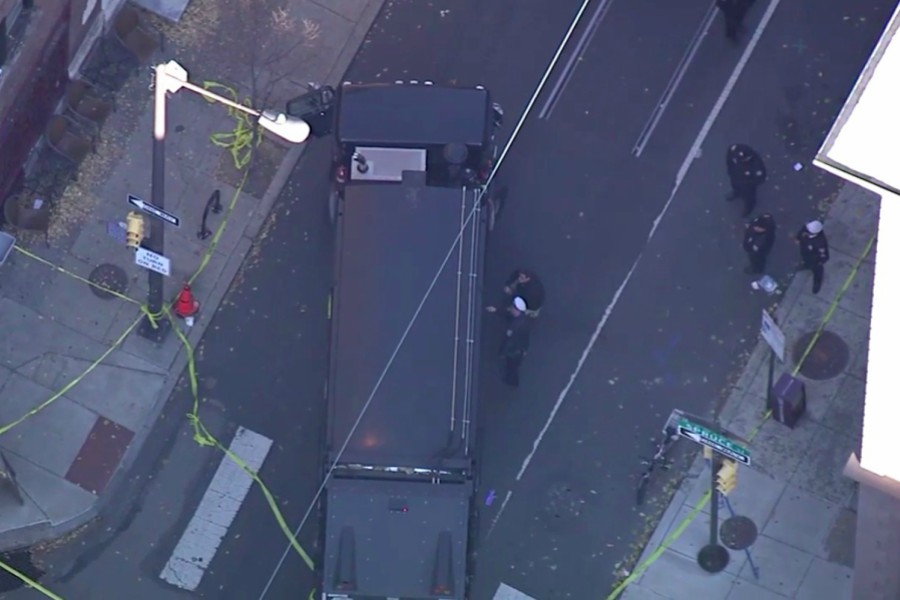 A trash truck struck and killed a bicyclist on Tuesday morning in Center City.

Here’s what we know: Police say a privately owned sanitation truck hit the 24-year-old woman, who lived in the area, shortly before 7:30 a.m. at the intersection of 11th and Spruce. She was rushed to Jefferson Hospital and pronounced dead 20 minutes later.

In the wake of the tragedy, biking advocates are renewing their push for protected bike lanes along the street – as well as the neighboring Pine Street – which they say could have been prevented the cyclist’s death.

The accident on Tuesday morning is under investigation, and police have not announced any arrests. Investigators say the truck and the woman, who has not yet been identified, collided as the vehicle attempted to make a right turn onto 11th Street (a type of accident referred to as a right hook). Other circumstances of the crash, such as the speed of the truck, remain unclear.

I biked by the accident about 20 minutes after it happened, on my daily commute to work, and realized the young woman who lost her life could have easily been me or the thousands of others who derive a false sense of security from the current Spruce and Pine street bike lanes.

Police say the female victim was riding her bike when she was hit by the trash truck in Center City; she died at the hospital https://t.co/esbnOsheRk pic.twitter.com/Pfswr5H4QO

Before you say protected bike lanes might not have saved this cyclist’s life, know this: They typically make intersections smaller and allow for a tighter turn radius, which forces trucks and other cars to slow down when turning. And many protected bike lanes include curb extensions (also called bulb-outs) that reduce the chances of right hook accidents, increase pedestrian visibility, shorten crossing distances, and visually narrow the roadway.

Like many bicyclists, I’ve tensed as a careless driver sped past me to whip right (often without using a turn signal). But we don’t need to focus on the particulars of this specific incident to consider the case for protected bike lanes on these heavily trafficked roads, which many cyclists view as their best bet for navigating the city safely.

In fact, one of the most frequent complaints on Spruce and Pine Streets are cars – particularly delivery vehicles – blocking the bike lanes. It’s like clockwork: Every day on my commute home on Spruce, there are at least two UPS trucks blocking the lane somewhere between 7th Street and 20th Street. These trucks are often the subject of debate over protected bike lanes in Washington Square West.

In their fight to install protected lanes along Spruce and Pine, biking advocates have encountered resistance from residents who complain that erecting some kind of protective barrier (like raised planters, parked cars, or plastic delineator posts) would block their deliveries.

In the wake of the tragedy this morning, biking advocates like South Philly resident and cyclist Dena Driscoll slammed those in opposition to the protected bikes lanes and continued to push residents to voice their concerns to Councilman Mark Squilla.

I am devastated by this news. Spruce is not safe it has had money to be mildy protected for almost a year and still the Resident Ass. have halted this progress. May this death be on their hands.

On Tuesday, Driscoll criticized members of the Washington West Civic Association who opposed the protected bike lanes at a meeting with the Office of Transportation and Infrastructure Systems in December 2016. At the meeting, the groups were discussing plans to use a portion of a $300,000 federal grant to install plastic delineator posts along the two roads. Driscoll said she was frustrated that several residents fought the possibility because they “felt they were losing their loading zone in front of their home.”

“This is really absurd, because many Philadelphians do not have this privilege to load or unload in front of their house,” Driscoll said. “We cannot put our personal convenience in front of the safety of the hundreds of thousands of people using these bike lanes.”

At the very least, Driscoll and others, including the Bicycle Coalition, want the city to repaint the lane, which has faded since it was installed seven years ago.

Bicycle Coalition communications manager Randy LoBasso said the organization is “trying to get safety prioritized” in the wake of Tuesday’s death.

The organization will host a vigil for the cyclist at 5 p.m. on Wednesday at the corner of 11th and Spruce streets.

Lack of safe infrastructure on Spruce and Pine is also likely to blame for this tragedy. Painted lines are not enough — and painted lines that've been faded to nothing are certainly not enough.

The excuses for blocking real infrastructure on Spruce and Pine was mesmerizing — everything from "historic preservation" to "bicyclists may be carrying bombs in their backpacks." (!!)

For too many, death is just part of life behind the wheel. Hope Council is listening to the calls they're getting this morning, reading emails, and checking out Philly Bike Twitter. Status quo is not sustainable.

This was inevitable given current state of bicycle infrastructure on that street and total lack of enforcement re blocked lanes. https://t.co/gxa6zas30D