The controversial video shared by Melissa DePino has been viewed more than four million times in less than 48 hours. 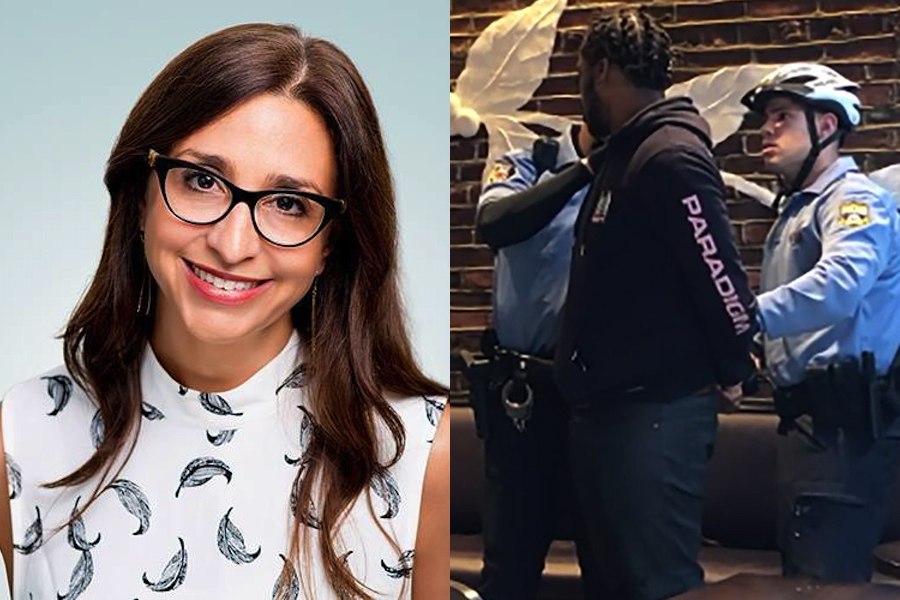 Left: Philadelphia resident Melissa DePino, who shared the now-viral video from the Philadelphia Starbucks arrest on Thursday. Right: A screenshot from the video.

If you’ve been anywhere near the Internet over the last 48 hours, you’ve probably seen the video of two African American men being arrested by the Philadelphia Police Department inside a Starbucks on Thursday afternoon. Starbucks has apologized. The men were not charged with anything and have been released. And the PPD has said the cops did nothing wrong. Here, Rittenhouse Square resident Melissa DePino — the one who shared the video — gives her account of what happened inside the Starbucks.

So this has been an interesting couple of days.
It’s freaking insane. Like, literally insane. It’s crazy viral. Every single media outlet in the world is calling me. But I’ve only talked to the Root and somebody from Good Morning America. It’s so overwhelming.

When did you first notice the two men who wound up being arrested at the Starbucks?
I was just sitting there working on my laptop, and I guess I first noticed them when the two first cops — the bike cops — walked in. The girl behind the counter had called 911, apparently, and the cops came and said the guys were “trespassing.” They said we were waiting for somebody, and then the white guy in the video — that’s their family friend they were waiting for — he shows up. The guys wanted to know what they did. And then more cops and more cops and more cops show up.

And then how did it escalate from there?
A bunch of people in the store were standing up and talking to the girl behind the counter and the cops, asking why this was happening. And then they freaking put them in handcuffs and perp-walked them out the freaking store. These guys never raised their voices. They never did anything remotely aggressive.

You would have heard or seen it.
I was sitting close to where they were. Very close. They were not doing anything. They weren’t.

What’s been the reaction to the video that you shared?
I can’t even get over it. It’s got 4.15 million views, 101,000 retweets. It’s freaking insane. Honestly, I didn’t think this would get picked up.

Why not?
People ignore this kind of stuff. They don’t believe that it happens. People are saying that there must be more to this story. There is not. This would never happen to someone who looks like me. People don’t believe black people when they say this stuff happens. It does. They want to know the extenuating circumstances. There are none.

What do you hope happens next?
I’m no expert. I just happened to be there and I happened to share this video. I knew it wasn’t right. I hope it starts a conversation. And hopefully people will start to believe that this really does happen.

Will you be going back to that Starbucks?
No. I can’t. And it’s right around the corner from my house.