The neighborhood is now “formerly known as the Italian Market.” Say what? 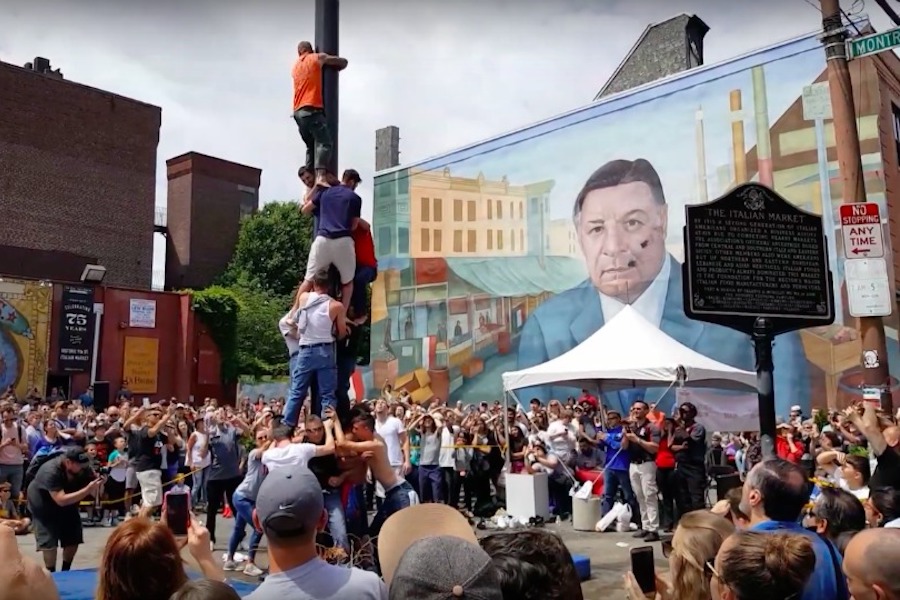 We’ve updated the language in our survey to say “also known as the Italian Market,” given that different people throughout the city may refer to the area in one way or the other. Our original copy was based on our understanding of “Italian Market” being a popular nickname and not the proper name, and was not an opinion on what the area should or shouldn’t be called. We invite everyone in Philadelphia, both those who live near the Market and those who visit, to take our survey about the Rizzo mural, which is open through March 28.

Monday is Saint Joseph’s Day, so it seems like no better time to ask the following question: Is the Italian Market really no longer called the Italian Market? That is precisely the assertion made last week by the City of Philadelphia’s Mural Arts Program.

And so, Mural Arts put out a public statement last week asking for public input on the future of that mural.

I’ll let you all debate the Frank Rizzo mural on your own time. For now, I’d like to focus on one part of the city’s statement that had me, and many in the South Philadelphia community, scratching our heads:

“While the mural sits in the Bella Vista community,” reads the city’s statement, “it also exists in an area that supports the 9th Street Market (formerly known as the Italian Market), which is home to shoppers from many neighborhoods and tourists alike.”

Once more for effect:

Formerly known as the Italian Market.

Now, I realize that demographics have changed quite a bit in the area surrounding what apparently used to be called the Italian Market. Heck, I just cheated on Villa di Roma last week by visiting the fantastic Mexican restaurant next door, Blue Corn.

But, as far as I know, that hasn’t actually happened … yet. It would, or at least should, require, you know, public input.

“Everything is becoming more generic and politically correct,” laments Frank Olivieri, co-owner of longtime neighborhood business anchor Pat’s King of Steaks, who says nobody has run the idea of changing the name of the Italian Market by him. “Does the name Italian Market actually offend people who aren’t Italian? What does New York do with Little Italy? Is Chinatown not OK? What if people become offended by the number two? Do we start calling 2nd Street ‘The Street Between Front and 3rd Street?’”

Olivieri isn’t a fan of neighborhood name changes, and I’m not either.

I still call the Gayborhood the Gayborhood. I won’t be coerced or cajoled into using the name Newbold to refer to Point Breeze. When individual developers try to change neighborhood names on a whim, I will respond with the full shock and awe of my keyboard. And I will never, ever call the Italian Market anything but the Italian Market, lest I be forced to celebrate National Vegan Cheesesteak Day.