Welcome to Stonewall Heights, everybody! 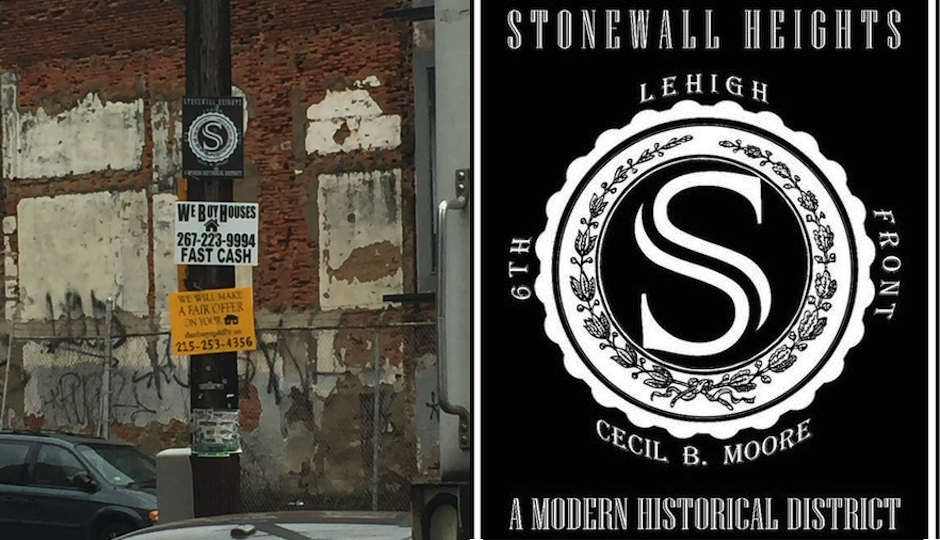 There’s a new neighborhood in Philadelphia, kids! Parts of Kensington shall henceforth be known as Stonewall Heights. No, the name change wasn’t voted on by the local residents. And it wasn’t a decree from City Hall. You can thank one guy for the new name: Philadelphia developer Paul Janaitis.

Signs proclaiming the new name — and its designation as a “modern historical district” — have been popping up on telephone poles in Kensington, and neighbors appear to be pretty unhappy about it, as chatter on community Facebook pages has indicated. The boundaries of Stonewall Heights are said to be Front Street to 6th Street and Lehigh Avenue to Cecil B. Moore Avenue, an area encompassing parts of Olde Kensington, South Kensington, and Norris Square.

“It is pretty galling for somebody to attempt to give a fancy new name to these tight-knit communities,” says Jessica Noon, a South Kensington — oh, sorry, Stonewall Heights — homeowner and South Kensington Community Partners board member. “It’s so infuriating and bewildering. I can’t imagine how anyone thought this was a good idea. There’s not even a connection between the name and the history of the neighborhood.”

Noon sure is right about that. We thought that, perhaps, Stonewall was somehow a reference to the site of the 1969 riots in the gay rights movement, that maybe somebody was trying to create a Kensington Gayborhood. But, no. It turns out that the Stonewall in “Stonewall Heights” is derived from Stonewall Contracting, a company owned by Janaitis.

“Stonewall is just my company name,” explains Janaitis, who says he’s lived at 2nd and Susquehanna for the last decade.

But why did the area need a new name to begin with?

Well, Janaitis explains, the Norris Square section of Kensington is actually named after Isaac Norris, an 18th-century mayor of Philadelphia who owned slaves.

“That’s not the best reason to save a name,” says Janaitis. “I didn’t realize that it was going to be a problem. Are you not allowed to just make up a name? Is that now illegal? They can argue that they’d rather keep it named after a slave trader.”

Of course, the section that Janaitis has dubbed Stonewall Heights doesn’t include all of Norris Square, and it includes parts of those other Kensington neighborhoods as well.

“It’s true that I’ve exceeded [the boundary of Norris Square],” admits Janaitis. “And I’ve usurped some of 19133. For the purpose of talking about this section of the area, I figured, why not make it a little nicer, because this side of Front Street is nicer. On the other side, you’ve got all your people dipping and all the hypodermic needles, but this side is more family-oriented.”

As for the numerous signs themselves, which would appear to violate Philadelphia’s poorly enforced law against so-called bandit signs, we asked Janaitis who put them up, since his realtor, Old City’s Christopher Baker, refused to tell us. (Although Baker was sure to drive home the point about the slaveowner.)

“Oh, I put them up,” Janaitis declared. “I see plenty of ‘WE BUY HOUSES’ signs out there, so what’s the difference?”

Janaitis also told us that although detractors of Stonewall Heights have been vocal on social media recently, he believes there are just as many people out there who support the idea.

“And why wouldn’t they?” he asked us. “Stonewall Heights has a classy ring to it.”