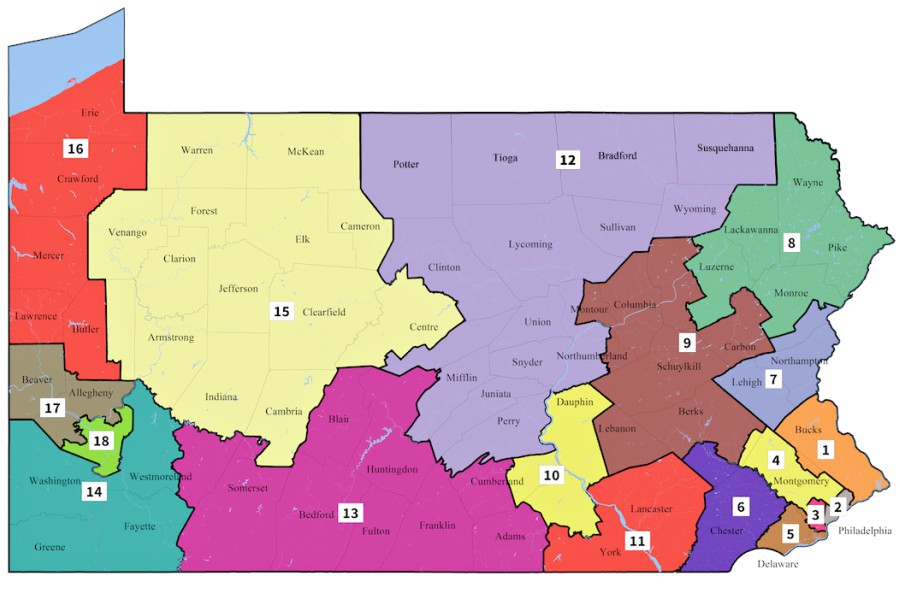 The new congressional boundaries imposed by the state Supreme Court on Monday.

Pennsylvania has a new congressional map.

On Monday evening, the state Supreme Court adopted new district boundaries that will likely give Democrats a boost in their attempt to secure control of the U.S. House via the 2018 midterm elections.

The new map comes less than a month after the court struck down Pennsylvania’s last map, claiming it was unconstitutionally gerrymandered to give Republicans an unfair advantage. Both Republicans and Democrats, including Gov. Tom Wolf, had submitted proposals for new boundaries, but neither party was successful in getting its designs approved.

Under the previous map, which was drawn in 2011 by a GOP-dominated state legislature, Republicans held onto 13 of the state’s 18 House seats, even after elections won them just about half the statewide congressional vote. Map analysts told The New York Times on Monday that the new boundaries could prompt Democrats to win three or four more seats, according to an analysis of 2016 voting patterns. The new map would divide 13 counties as opposed to the 28 counties split under the previous boundaries.

Here's the PA congressional map that's been in place since 2011 (left) and the new one (right) pic.twitter.com/hdjk0Qx8Bg

Republicans denounced the state Supreme Court ruling last month and hinted that they would appeal the new map before it was even released. Senate President Pro Tempore Joseph Scarnati and House Speaker Mike Turzai said on Monday that they will likely attempt to challenge the map in federal court.

In a statement, Scarnati and Turzai said the new map’s implementation “would create a constitutional crisis where the Pennsylvania Supreme Court is usurping the authority of the Legislative and Executive branches. … This map illustrates that the definition of fair is simply code for a desire to elect more Democrats.”

Wolf praised the new boundaries on Monday. In a statement, he said he applauds the state Supreme Court justices for “their effort to remedy Pennsylvania’s unfair and unequal congressional elections.”

“Now, my focus will be on making sure the Department of State can support our counties and all candidates in the election process, particularly during the petition period,” Wolf added. “My administration will work expeditiously to update Department of State systems and ensure all processes are in place to assist candidates for Congress.”

Pennsylvanians are sick and tired of gerrymandering, which perpetuates gridlock, alienates citizens and stifles reform. I have stood for fairness and rejected a gerrymandered GOP map. I respect @SupremeCtofPA's effort to remedy PA’s unfair and unequal congressional elections. https://t.co/84gOluSBmI

The lawsuit that prompted the state’s gerrymandering saga was filed last June by the The Pennsylvania League of Women Voters and 17 individual voters.