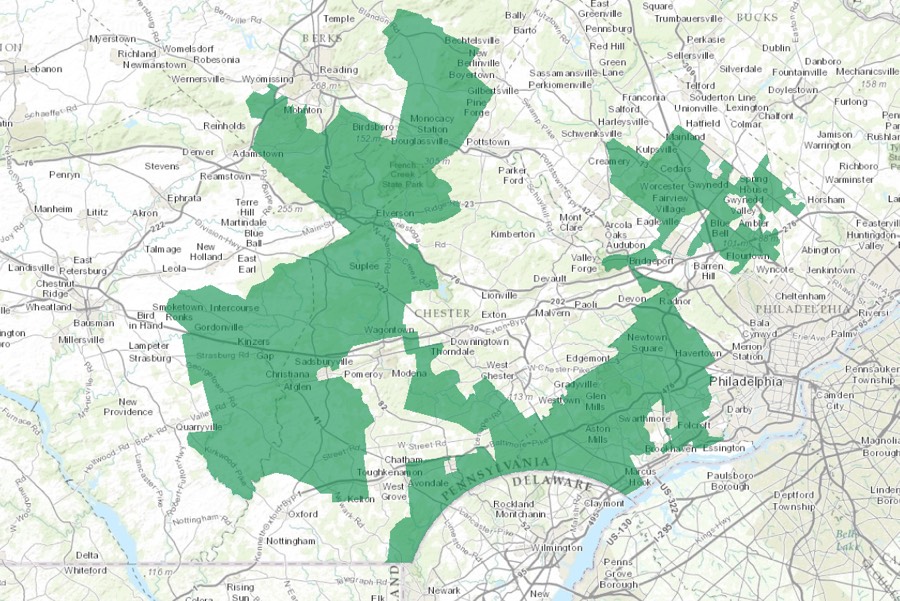 On Monday, Pennsylvania’s Supreme Court declared the state’s Congressional map an unfair, partisan, unconstitutional mess of a gerrymander, which should come as a surprise to exactly no one who’s ever looked at it and wondered why the 7th District (see above) resembles a pompadoured Abraham Lincoln kicking a basset hound. The decision made national news, including a thorough explanation by Rolling Stone of how the case differs from other recent, unsuccessful U.S. Supreme Court challenges to redistricting. Icing on the cake: Our state Supreme Court ordered the legislature to produce a new redistricting map in time for the May primary election—and if it can’t or won’t, the court will choose one on its own.

Back in 2011, Sean Trende of Real Clear Politics, in a sharp analysis of the state map, called it “probably the most effective gerrymander we’ve seen so far” for its “Rorschach inkblot districts in southeastern Pennsylvania.” Hey, that’s us! The only things more convoluted than the gerrymander Republicans carved out in the 7th District are the inchoate explanations its beleaguered Congressman, Pat Meehan, has been offering regarding his relationship with a female staffer that resulted in a sexual-harassment claim against him and his payout of taxpayer dollars to her. Sample Meehan quote: “And I’ve been upfront with the idea that, while we worked together, there was a growing affection that I wanted to make sure—that I struggled with—to make sure that I would never cross that line. I believe that I was invited to be able to communicate about that. There were questions about whether there was something going on the daily basis that she ought to know about, or that was different in the way we were engaging, and I thought that it was an opportunity and an important one for us to—for me—to be able to talk about that with her so that we would be able to sort of regauge that in a way in which we’d be comfortable working together.”

Sheesh. Is it any wonder our politics are a mess?