No Thanks, SNL: We’ll Keep the Phillie Phanatic

Our sports reputation is already bad enough – we don’t need Trump to replace our mascot. 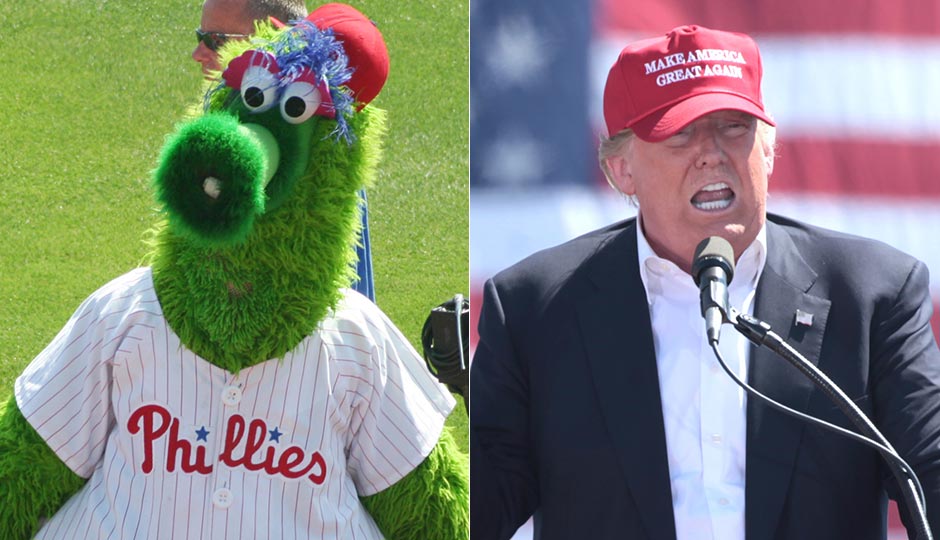 As you may have heard, Colin Jost made a proposition on the most recent Saturday Night Live episode: Donald Trump could replace the Phillie Phanatic.

Sure, we understand the comparison in light of current events, and some of us think the Phillie Phanatic can be a bit of an ass. But we doubt our mostly beloved mascot would do something as asinine as free throw paper towel rolls into a crowd of category 5 hurricane survivors who’d gone roughly two weeks without proper access to electricity and clean water.

ICYMI, that’s exactly what Trump did – and what Jost referenced – last week, during the president’s visit to the hurricane-ravaged Puerto Rico, where 34 people lost their lives to Maria.

“Nothing says I understand the gravity of the situation like a billionaire tossing six rolls of paper towels to hurricane victims,” Jost said. “Watching this, I realize Trump may not be the best president, but he would be the best mascot.”

“Just let him go nuts like the Phillie Phanatic,” Jost continued, “throwing free stuff to fans, cruising around on a four-wheeler, mocking other countries while he shakes that big old butt around.”

We’ll hand it to Jost: the two are more alike than we realized, especially considering Brian Howard’s description of the Phanatic from a few years back:

After all, what is the Phanatic if not a strutting, gyrating, grotesque-snouted embodiment of the loutish, bullying, I-do-what-I-want reputation Philly sports fans will never, ever shake? He’s the devil whispering in our ear. Our bad instinct. Our throbbing green id with a hair-trigger tongue. And we think he is hil-ar-i-ous.

But we’re begging the Phillies: please do not replace the Phanatic with Donald Trump. Our sports reputation is already bad enough.

On the other hand, we’re not so sure it would be a terrible idea to replace Trump with the Phanatic: a Public Policy Polling survey conducted last year found that Pennsylvania voters felt the Phanatic was more qualified to be president than Trump. And that was before the election.