82 Hate Incidents Have Been Reported in Philly Since November 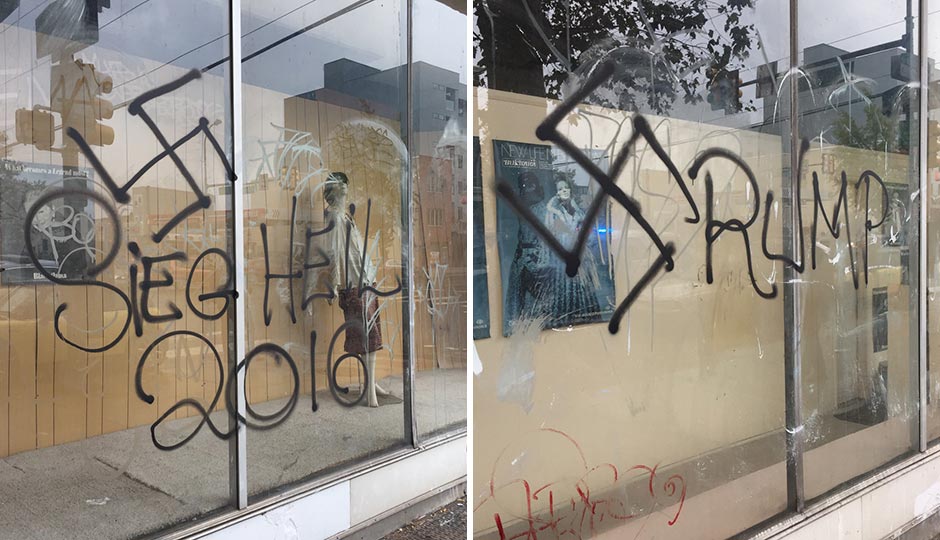 In November, the windows of the abandoned Meglio Furs store in South Philly were vandalized to read “Sieg Heil” and “Trump.” | Photos by Jared Brey

The nation has seen an uptick in reported hate crimes since the election of President Donald Trump, according to organizations like the nonprofit Southern Poverty Law Center.

Philly appears to be no exception. As Philly.com reported on Tuesday, 82 hate crimes and bias incidents have been reported in the city since November, per the Philadelphia Commission on Human Relations.

Both the commission and the Philadelphia Police Department refer to “bias incidents” as any incident “motivated by malicious intention because of a person’s actual or perceived race, ethnicity, religion, national origin, gender, sex or sexual orientation.”

The term helps the organizations keep track of discriminatory acts that don’t rise to the level of hate crimes, which are illegal and often accompany assault or vandalism.

Documented incidences include those immediately following the election in November, like the racist cyber group sent to black students at the University of Pennsylvania and the two swastikas painted on storefront windows in South Philly, as well as those reported more recently, like the nooses found in Rittenhouse and the U.S. Mint facility in Old City in July, as well as the vandalism of a Northeast Philly synagogue earlier this month. (A man who allegedly urinated on the building’s front steps was charged with ethnic intimidation in that incident.)

Rue Landau, who has served as executive director of the Human Relations Commission for nine years, told Philly.com that the organization has “never seen so many incidents.”

The commission reportedly began following hate crimes and bias incidents more closely since the election – so comparable data from previous years wasn’t available, which could attribute to the apparent rise. An FBI report claims 14 hate crimes were reported in the city in 2015 (the most recent statistics available).

Pennsylvania has one of the country’s highest populations of hate groups, according to the Southern Poverty Law Center. The nonprofit has documented an “explosive rise” in hate groups coinciding with Trump’s campaign and election. Its map of hate groups in the U.S. circulated after neo-Nazis and white supremacists spurred violence during a rally in Charlottesville, Va. earlier this month.

Trump received notable backlash for his delay in condemning neo-Nazis and white supremacists after the Charlottesville rally. The president ultimately blamed the violence on “many sides,” including what he called the “violent” “alt-left.”