The Israelite School of Universal Practical Knowledge and their bullhorn-aided rhetoric may be the bane of my existence, but in a country where freedom of speech is more imperiled than ever, I salute them. 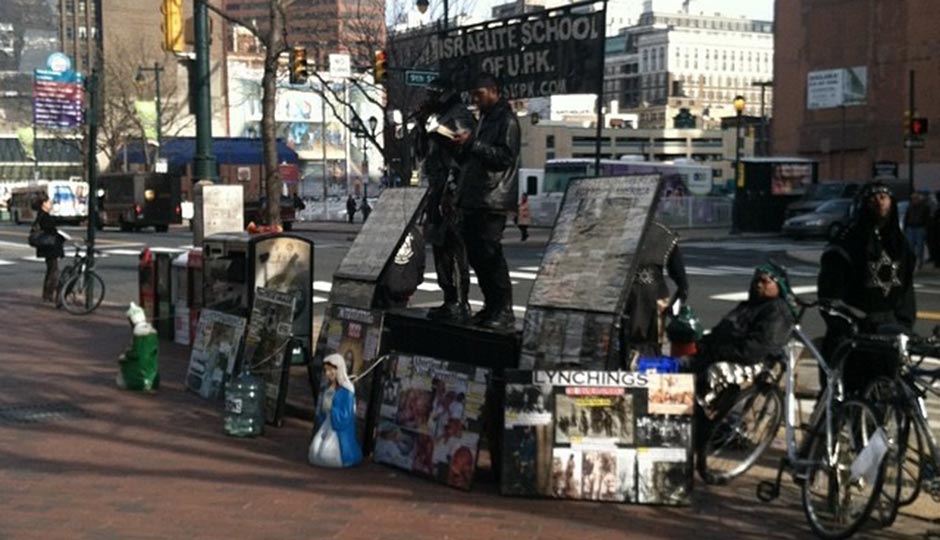 I’ve always been a big fan of spring.

We as Americans tend to talk reverently about spring because it’s seen as a time of renewal. Flowers bloom. It’s baseball season. Heavy coats give way to jean jackets and cardigan sweaters. Everything feels new.

Now, every city has it’s signs of spring. In Washington, D.C., it’s the cherry blossoms. You can smell the magnolias in Charleston, South Carolina. In my family’s home state of Kentucky, spring means shopping for just the right hat to wear to Louisville for the Kentucky Derby.

But, I think that in light of the Trump administration’s attacks on reporters for, well, reporting and the fact that there’s a woman looking at a year in jail for laughing during a confirmation hearing, the way that I know it’s springtime in Philadelphia takes on a little more relevance.

That’s because my sign of spring, believe it or not, involves watching a group of ornately dressed men yell their interpretations of Bible verses at me through a megaphone attached to a speaker as I walk by.

Yes, ladies and gentlemen, for me, springtime in Philadelphia begins with an encounter with the Hebrew Israelites. Or, to be more exact, the men of the Israelite School Of Universal Practical Knowledge.

For as long as I can remember, the men from the Upper Darby–based school have installed themselves at various street corners in Center City. Before the remodeling of the Gallery took most of their audience away, they stood in front of the mall and shared their doctrine. At one time, they were installed in front of Liberty Place. These days, they call the sidewalks in front of Temple University’s Center City campus home.

One day, I walked by as they were having a rather animated argument with another sign of springtime in Philadelphia: the return of Philly Jesus. It was probably the funniest Harmonic Convergence of Free Speech I had seen since the Avenging the Ancestors Coalition and the Tea Party on Independence Mall on the Fourth of July a few years back.

The Southern Poverty Law Center lists the Hebrew Israelites as a hate group because they use the Bible as a means to spew some pretty racist, sexist, and homophobic rhetoric — for example: “We don’t hate White people, but God hates White people!” The whole bullhorn-attached-to-a-speaker thing is also a special brand of obnoxious.

But like their speech or not, the First Amendment protects it, which is something that the shop owners at Liberty Place found this out the hard way in 2013 when they sued to move the ISUPK off of the sidewalk in front of the building.

They lost. They had to. Free speech is free speech.

Someone might want to remind national Republicans of that.

From Trump’s nearly invisible chief of staff Reince Priebus telling anyone who would listen that the administration was seriously looking at ways to change the libel laws due to 45’s media persecution complex to Secretary of Commerce Wilbur Ross’s total cluelessness when it comes to a lack of dissent in Saudi Arabia (and the authoritarianism that maintains it) to Greg Gianforte’s winning a special congressional election in Montana even after allegedly body-slamming a reporter for asking a question, you have a lot of folks in (or soon to be in) Washington right now who think that the First Amendment belongs on a roll in the restroom.

But while these examples are kind of nuts, they’re nothing compared to the case of Code Pink’s Desiree Fairooz.

Fairooz is looking at a year in jail after being convicted for causing a disruption for laughing during the confirmation hearings for Attorney General Jefferson Beauregard Sessions. Apparently, one of the folks who testified that Beauregard would be an AG for all the people made her laugh out loud.

That this went to trial, and that Fairooz was convicted, is nuts. But it should also stand as a reminder that Thin-Skinned Men + Unchecked Power = Dangers to the First Amendment.

Someone needs to shout that from the rooftops with a bullhorn.

Since it’s springtime, I think that I can probably borrow the ISUPK’s.