30 Injured After Bus With Philly Schoolchildren Overturns on Maryland Highway

The bus was carrying students and chaperones from the C.W. Henry School in West Mount Airy. Two people are critically injured. 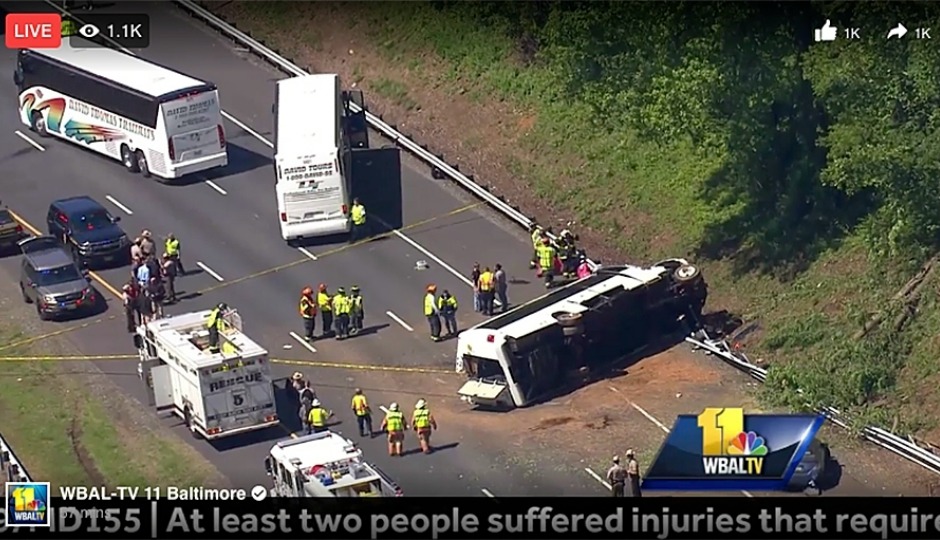 In this image made from video and provided by WBAL-TV, authorities investigate an overturned bus on Interstate 95, Monday, May 15 near Havre de Grace, Md. Cpl. Tyler Allaband of the Maryland State Police said by telephone that the bus overturned in the southbound lanes of the highway on Monday near the exit for Havre de Grace. (WBAL-TV via AP)

This is a breaking story. Check back for updates.

More than 30 people have been injured – including two critically – in a serious accident involving a bus that was carrying Philadelphia schoolchildren.

The accident occurred around 9:30 a.m. on stretch of I-95 in Havre de Grace, Maryland, when a Werner Coach bus carry students, teachers and chaperones from the C.W. Henry School in West Mount Airy overturned. The bus was holding 26 children, two teachers, a parent chaperone and the driver, according to Maryland State Police.

The bus was reportedly on the way to Washington, D.C. for a field trip. Philly.com reports that the crash might’ve occurred when a car attempting to pass the bus lost control, veered across the highway and clipped the front of the bus.

At a press conference this afternoon, Philadelphia School District superintendent William R. Hite said officials were “working on a transportation plan to help parents and families reunite with their loved ones.”

The Charles W. Henry School will remain open all night and serve as the “reunification” center for crash victims and their families. Workers with Red Cross and the Salvation Army will be there. Parents inquiring about those involved in the crash are encouraged to call 215-400-5858 for more information.

There have been no reported deaths as of 3 p.m. Monday.