Police are investigating, and so is FedEx. 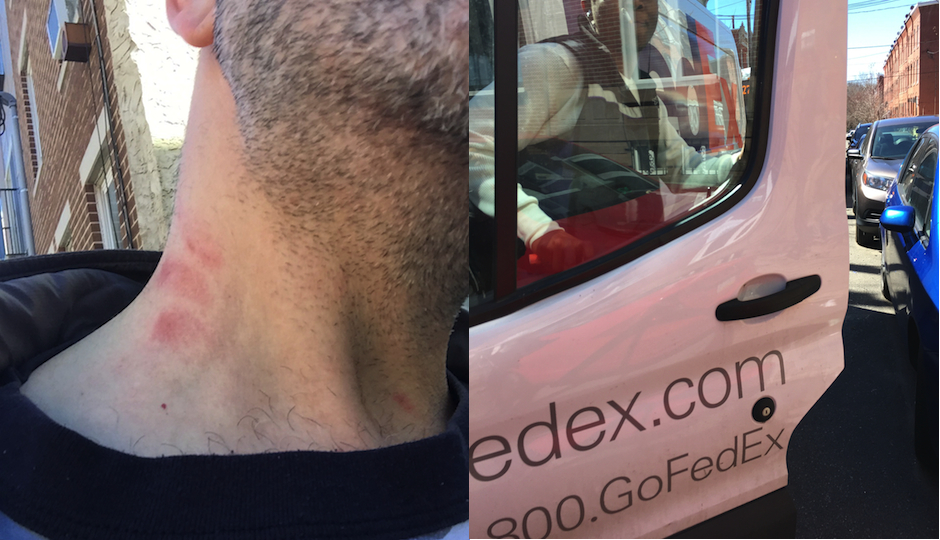 If you drive a car in Philly on the regular, you’ve no doubt had the following experience: Someone is double-parked in the middle of the street in front of you even though there are actual parking spots or spaces not far away. You can’t get by. That’s where the problems began for Ned Sonstein.

The 50-year-old Northern Liberties resident runs errands for people as his day job, and that’s exactly what he was doing on Wednesday when he was driving his white Ford Escort station wagon around Fairmount.

Sonstein says that he was heading east on Brown Street from 28th Street to 27th Street around 2:45 p.m. on Wednesday when he encountered a FedEx truck in the middle of the street, obstructing his path down the one-lane roadway.

“There were spots right there for him to pull into,” claims Sonstein. “But I guess he didn’t want to walk the 12 extra feet. This happens to me all the time.”

As Sonstein tells the story, he was patient at first. He gave a quick honk. Nothing happened. He honked a bit more. Still, no movement.

Sonstein claims that the driver emerged from the truck with a package, and that he was annoyed with his honking. Words were exchanged, and according to Sonstein, the driver told him, “Fuck you. Now it’s going to take me even longer.”

So, Sonstein did the most Philly thing he could possibly do. No, he didn’t key the car. And no, he didn’t smash the windshield with the tire iron in his trunk.

A little Philly-style karma, if you will.

“I wanted him to know what it felt like,” Sonstein told Philly Mag on Thursday afternoon. “I realize it was a dick move, but I wanted to teach him a lesson. There were plenty of other places he could have pulled his car. These guys do this every day.”

At that point, says Sonstein, things escalated. He claims the driver said, “Why don’t you get out of your fucking car?” after Sonstein had some choice words for him. Sonstein says he did, but only to get a photo of the driver.

“I wanted to send his picture to FedEx so they know what their employees are doing on the streets,” Sonstein explains.

He claims that once the driver saw him approaching the front of the truck with his phone pointed in his direction, the driver put the visor down so that Sonstein couldn’t get his face on camera. So Sonstein walked around to the side of the truck. And that’s when the driver came flying out of the truck, according to Sonstein.

“He threw me down on the street,” alleges Sonstein. “He put one hand around my neck choking me and was using the other to try to get my phone out of my hand. ‘Give me that fucking phone!’ he was screaming. But then people started coming out of their houses and now there was traffic behind his truck honking, and he let go.”

Sonstein says that he wanted to get away from there as quickly as possible. He wasn’t sure what was going to happen next. So he got back into his car and drove away, dialing 911 in the process. Once he got a look in the mirror, he realized that he had bruises on his neck. He says he also has back pain from when the driver allegedly threw him to the ground.

Shortly after the incident, Sonstein went down to the police station at 21st and Hamilton streets to fill out a formal complaint. Police confirm that an investigation is underway.

“These are serious allegations about behavior that would be clearly inexcusable and intolerable,” a FedEx spokesperson told us. ” We are looking into this situation very closely.”