Ta-nehisi Coates' Black Panther is the tip of the iceberg. With the East Coast Black Age of Comics Convention in Philadelphia this weekend, and Amalgam Comics opening in Frankford, the scene around comic creators of color is in full swing. A confession: I was never a big comic book fan.

Comics were just too expensive in Guatemala, where I grew up. They were also only spottily available — which wreaks havoc when you’re following a serialized storyline — and too full of American pop culture references for me to feel at home in their worlds.

And though I loved both writing and drawing, it was my intention to grow up to be a serious author. S.E.R.I.O.U.S. A writer who would look at social inequity and injustice and write about it so compellingly that readers’ worlds (and worldviews) would be rocked.

Well, you know what they say … girl plans and God laughs.

Almost a full lifetime later, I find myself noting that some of the writers/artists who do rock worldviews on regular basis choose comic books to do so.

On May 11th, Marvel’s Black Panther #2 dropped. Penned by National Book Award and MacArthur “Genius” grant winner Ta-nehisi Coates, Black Panther’s anticipatory buzz on social media was of such magnitude that even those outside of comic geekdom were excited about it. But Coates is only the best known of a large and stunningly talented generation of comic book mavens of color (creators, publishers, even retailers) who have made it their vocation to redefine the comic book genre for those of us who have come to it belatedly. 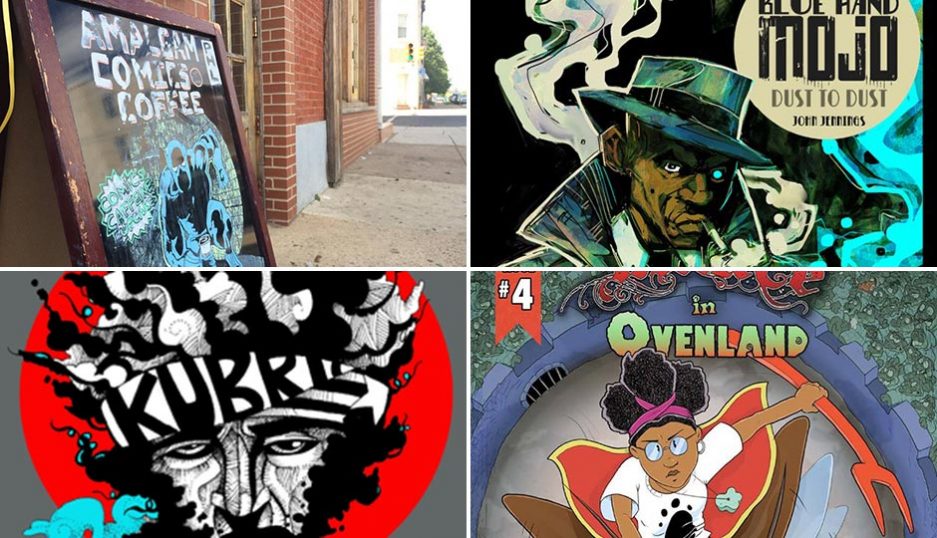 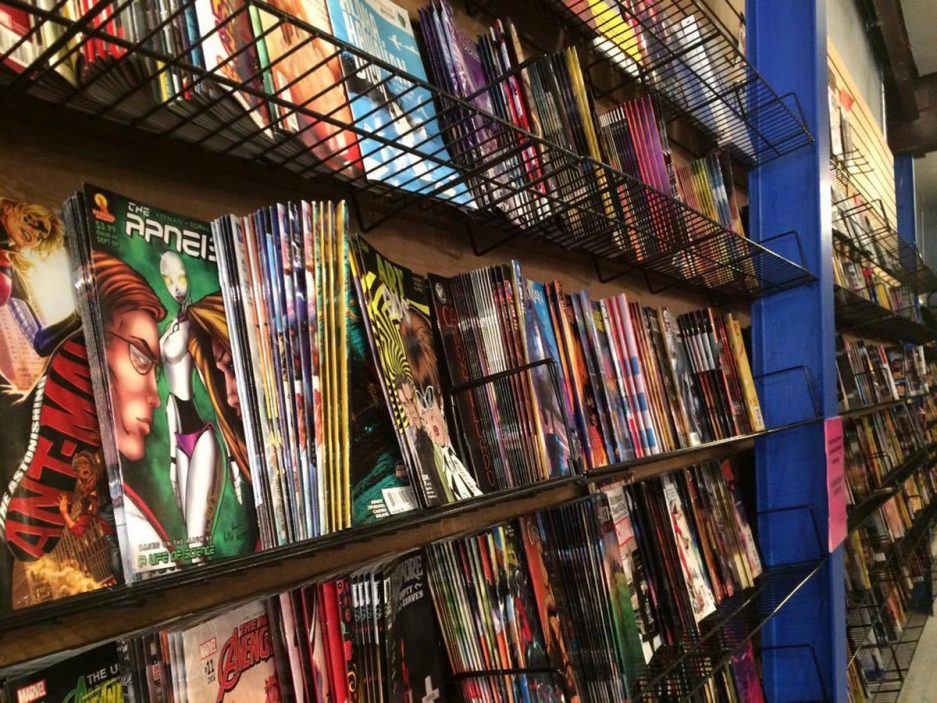 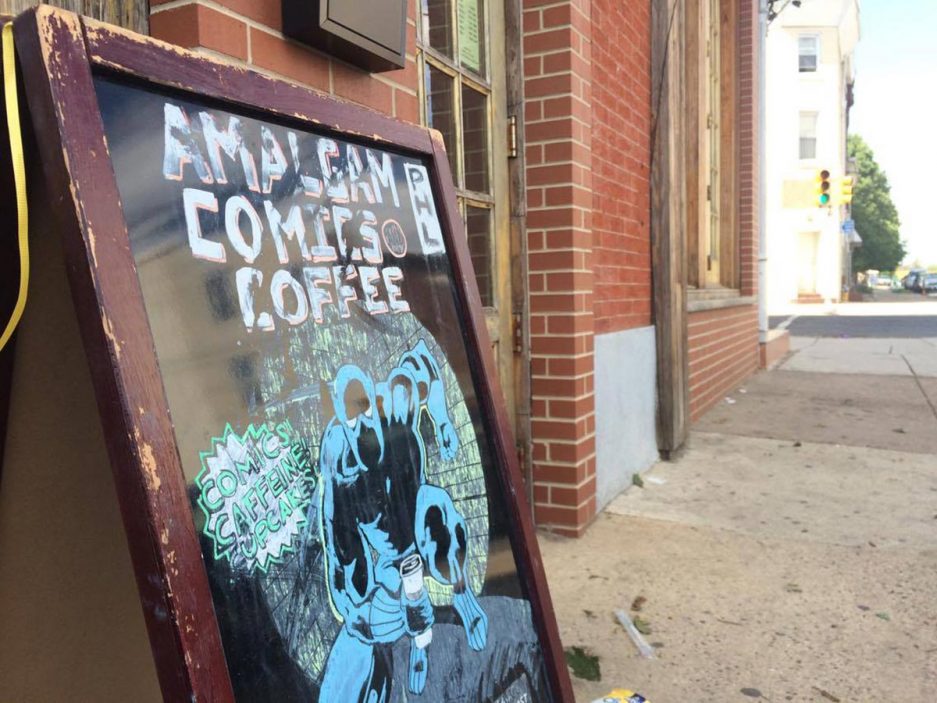 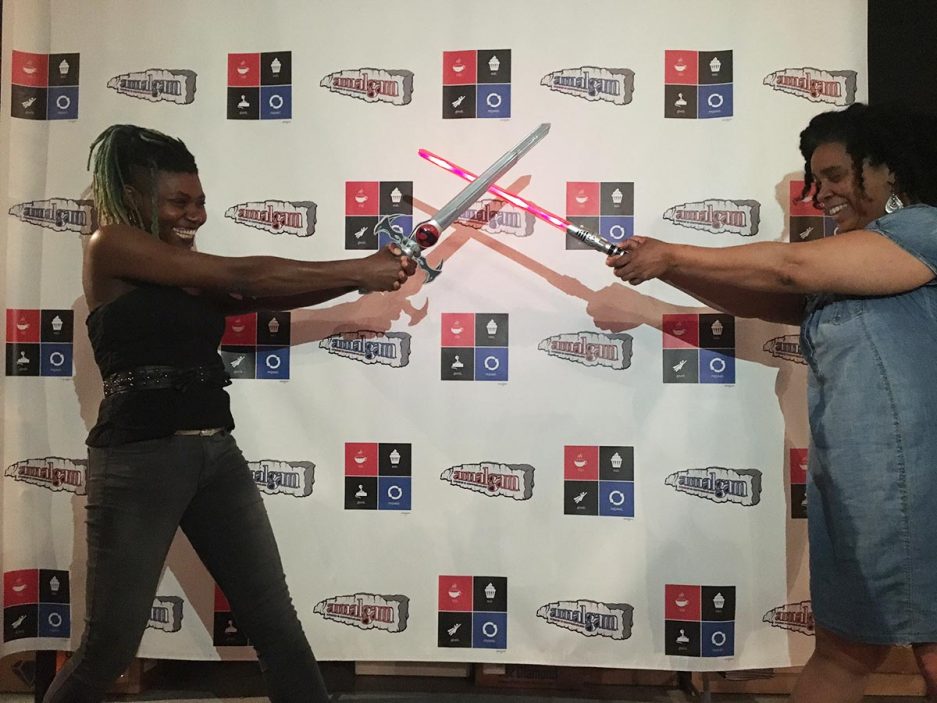 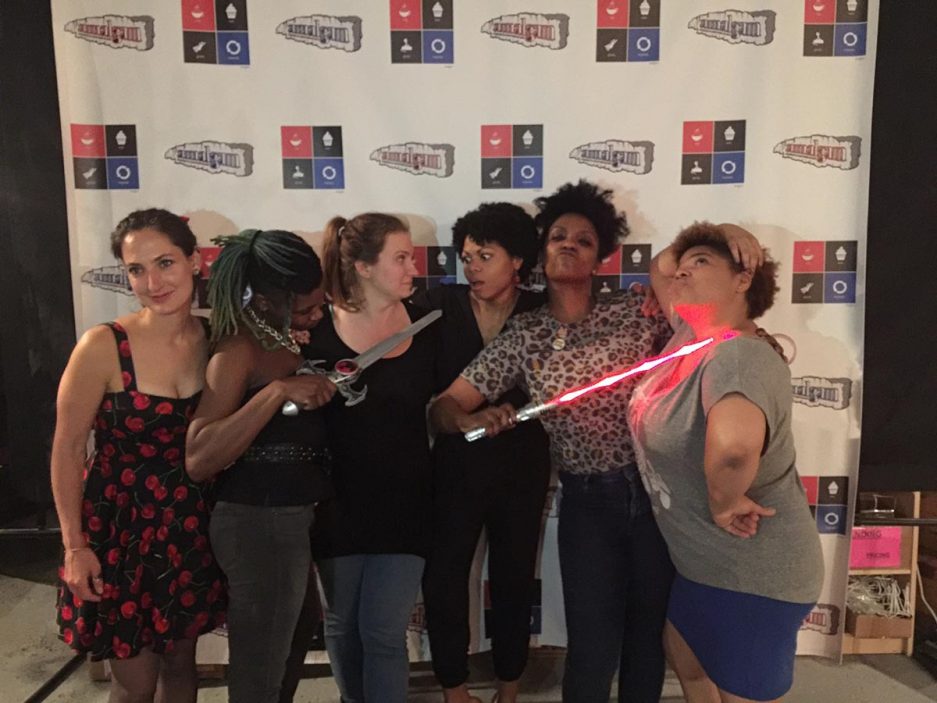 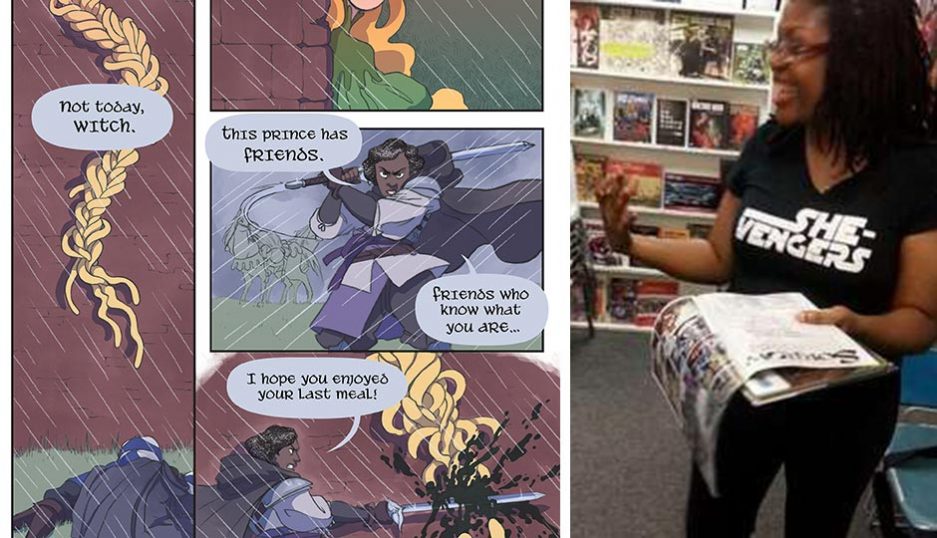 Mikki Kendall (right) and a page from her story Weedkiller drawn by Anna D'Amico. 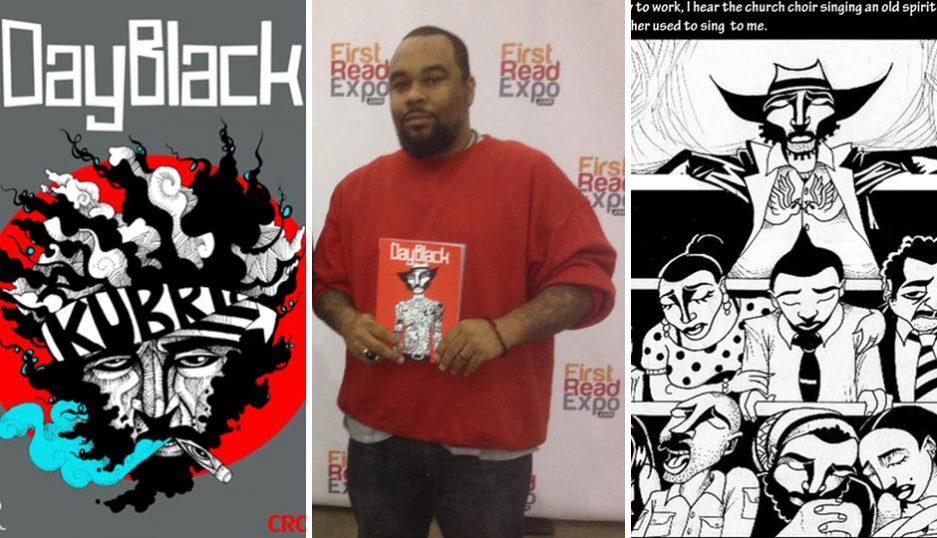 Keef Cross, writer and artists of Dayblack, has been nominated for a Glyph for best artist. 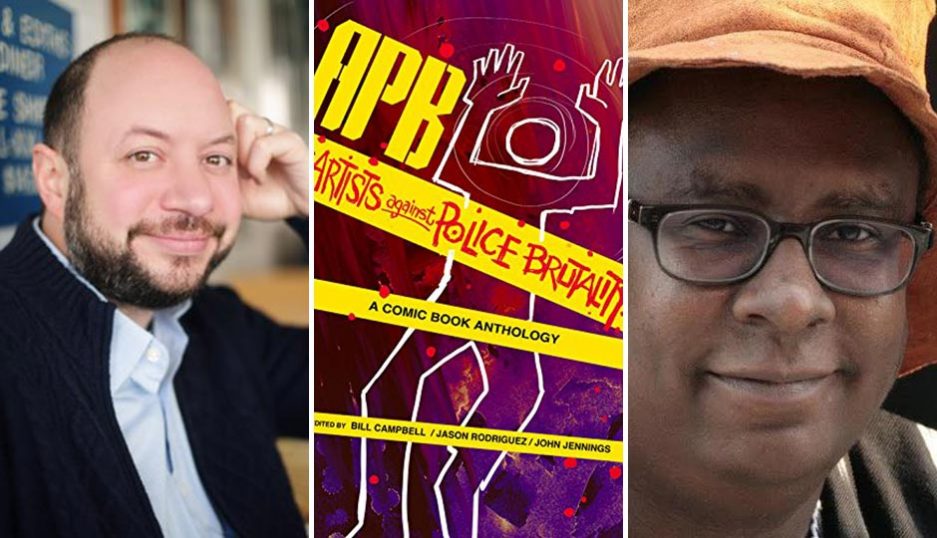 Jason Rodriguez (left) and Bill Campbell (right) co-edit (with John Jennings, next slide) Artists Against Police Brutality. Campbell will be receiving the Pioneer Award from the ECBACC on May 20th. 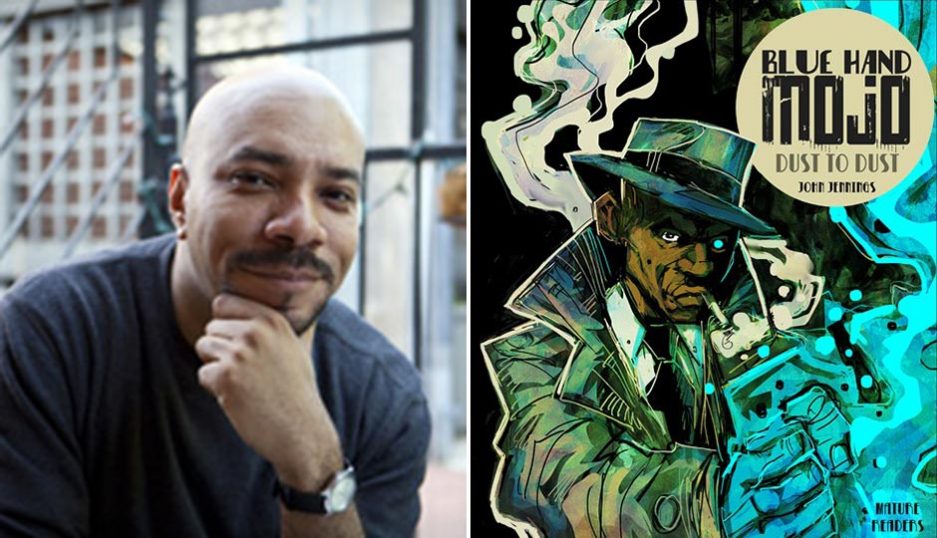 John Jennings, writer and artist of Blue Hand Mojo, has been nominated for two Glyphs: best cover and best artists. 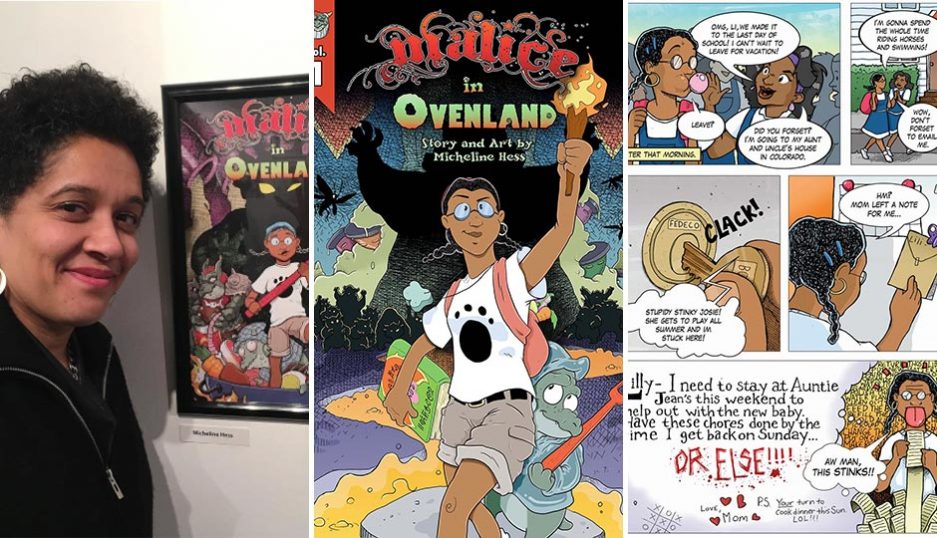 Michelline Hess, writer and artist of Malice in Ovenland, is nominated for a Glyph for best female character. 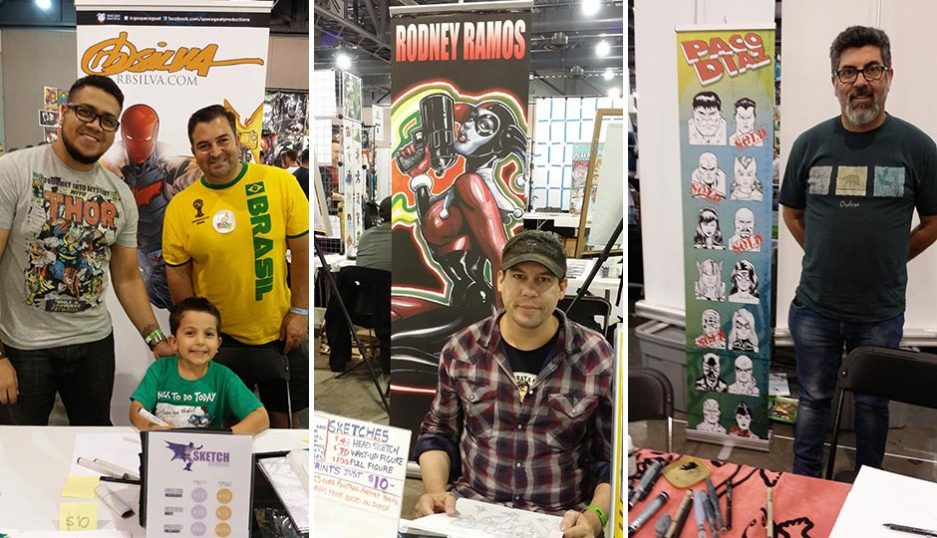 “Black creators have been doing what they do for decades now,” Bill Campbell, publisher of Rosarium Publishing in Washington D.C. tells me “I think they’ve become more visible because of social media on the one hand (because now they’re easier to find and it’s much easier for them to network and showcase their talents), and there’s a growing network of Black comic book conventions. You have them in Philadelphia, New York, two in Detroit, Atlanta, San Francisco, and Sol-Con (which is Black and Latino) at Ohio State.”

In fact, Philadelphia’s East Coast Black Age of Comics Convention (ECBACC) will be taking place May 20th and 21st. The Glyph Comic Awards will be presented on Friday, May 20th, at the African American Museum (701 Arch Street) and hosted by Philly comic artist Jamar Nicholas; the full convention will happen Saturday, May 21st, at the Enterprise Center (4548 Market Street, more about that here). A number of Rosarium’s folks are nominees this year.

“We have three artists up for four awards,” Campbell says. “Micheline Hess, Keef Cross, and John Jennings. All three are the writer/artists on their projects. Micheline has a children’s comic, Malice in Ovenland, about a little girl from Queens who is stuck in a magical land of greasy ghouls in her mother’s oven. [Cross’] Dayblack is about a vampire tattoo artist trying not to kill, but his past looks like it’s catching up to him. Keef is actually a tattoo artist, and he lays out the book in a way that looks like he’s just put his tattoo style on paper. Jennings is up for Best Artist and Best Cover for Blue Hand Mojo, which I call a “hoodoo noir” set in 1930s Chicago.” [Jennings is also nominated for an Eisner Award — the “Oscars” for comics — for his scholarly work, The Blacker the Ink: Constructions of Black Identity in Comics and Sequential Art.]

Campbell himself will be honored with a Pioneer award at the ECBACC, for having produced the ambitious and significant comic book anthology APB: Artists Against Police Brutality.

“APB was a project built out of anger,” he says. “It was the night that the Staten Island grand jury decided that the cops who killed Eric Garner would not be going to trial. While not totally unexpected, I was just furious. I was ranting on the phone with John Jennings saying something needed to be done. I suddenly realized that, as a Black publisher, there was something I could do. It was in that instant that APB was born. John was immediately on board. Then I called Jason Rodriguez and the project was launched within 10 minutes.”

Campbell says the project was a difficult one, involving the coordination of three very busy editors’ schedules, “but the hardest part was just how personal these stories are.”

“Ashley Woods‘ Family Portrait drawing kicks off the project, and it really sets the tone,” he says. “People become points of debate in any national conversation, and in a lot of ways, APB tries to remind the public that people are the victims here, people with family and loved ones … People like to think that police brutality is just a ‘Black issue,’ but all types of people can fall victim to it, and everybody should be speaking out against it. In APB they do.”

Rosarium’s publications are not the only ones that grapple with the concerns and lived experiences of people of color in comic book vernacular.

Arielle Johnson, the owner of the new Amalgam Comics and Coffeehouse on Frankford Avenue in the Kensington section of Philadelphia, says she is looking forward to the publication of Kwanza Osajyefo’s Black, a comic book which posits: In a world that already fears and hates them —what if only Black people had superpowers?

The promotional image for the crowdfunded comic is striking, with the “hands up, don’t shoot” pose of its central figure dressed in a red hoodie framed by two sets of hands training handguns on him/her.

Osajyefo has written that the idea for the book came about, at least in part, as “a rejoinder of my experience working at Marvel and DC, and what I, as a Black man, experienced in the comics industry.”

Perceptions are part of what the 33-year-old hopes to change with Amalgam.

“Comic book stores have the reputation of exclusion,” she says, “but you don’t have to prove your geek cred here. I want the person who has been reading comics for 50 years, or the person who just started with comics, to both be comfortable here.”

She says retailers are the public face of comic books, and in her store she aims for a type of inclusivity and diversity that is neither facile nor formulaic. She stocks books by LGBTQ creators, and creators of color, mainstream and indie books (a few in Spanish), manga/anime, and local titles that are new to her.

“I keep an open ear to what people want,” she says. “Philadelphia is a big geek town, and I’m a geeky person, but being a geek isn’t just one thing. There are multiverses out there.”

The Temple Fox School of Business grad — whose extended family are her store’s investors  — recently celebrated two grand openings: a conventional store opening on May 7th, and a dance party opening May 14th because, Johnson says, “You haven’t really done anything until you’ve danced about it.”

The store has very quickly become a destination for comic book aficionados from near and far, but Johnson wants it to serve as a community hub. She’s scheduled “Crafters of the Universe” meet-ups for knitters on Wednesdays and is thinking about regular cosplay-centered events — because she personally loves both knitting and cosplaying Storm (of X-men) “right down to the contact lenses.”

But she also picks events because she knows that inclusive “geek havens” like hers can have real life impact.

“I’m not the only Black girl who likes comics,” she says.

And so she recently held a “meet the author” event at the store with Natalie McGriff, the 7-year-old writer of “The Adventures of Moxie McGriff.” The young protagonist of McGriff’s book is close to her heart, Johnson tells me, because she herself grew up seeing very few positive depictions of Black girls with “dark skin and kinky hair” in comic books.

That lack is one that Chicago writer Mikki Kendall also tries to address with the comic books she writes.

“My upcoming indie will be called Alice In Jazzland, and is the result of a childhood fascination with adventure stories and the adult realization that Black girls never seem to be in those books,” Kendall said. “In a lot of ways Alice is the story I would have wanted to read.”

Kendall, who also writes speculative fiction and non-fiction and has bylines at xoJane, the Guardian, Salon and NPR’s Code Switch, is expecting another comic publication this summer, when her story “Weedkiller” appears in the Columbus College of Art and Design anthology, Spitball 2.

“The character Silphia I created … is a lot like me,” she says. “A woman who fights and loves hard.”

Kendall says that social media has made it easier for more folks to notice indie creators of color. Her Young Adult comic about online harassment, Paths, for example “actually came back to me on Facebook via a friend’s youth group picking it up for their discussions.”

“Personally I love working in comics because it’s such an accessible medium for readers at all levels,” she adds. “You can express so much in comics and reach so many people with the combination of imagery and text.”

What she wants people to take away from the recent visibility of — and attention to — Black comic books is what I believe is at the heart of Campell’s, Johnson’s and even Coates’ efforts.

“Our voices matter,” Kendall says. “Our stories matter and we should never forget that we have a right to take up space. To create.”

More Comic Book creators of color to check out:

In addition to other Rosarium comic book writers/artists, “one project that I’ve been salivating over (and I don’t know the name of it) is being done by Richard Van Camp and Weshoyot Alvitre. It’s like AIM (American Indian Movement) meets Star Wars. The little I’ve seen looks amazing, and I just love the idea of it.”