Scientists from Temple’s Lewis Katz School of Medicine and local biopharma company Neuropathix are testing their compound, KLS-13019, which is intended to target chemotherapy-induced pain in cancer patients. 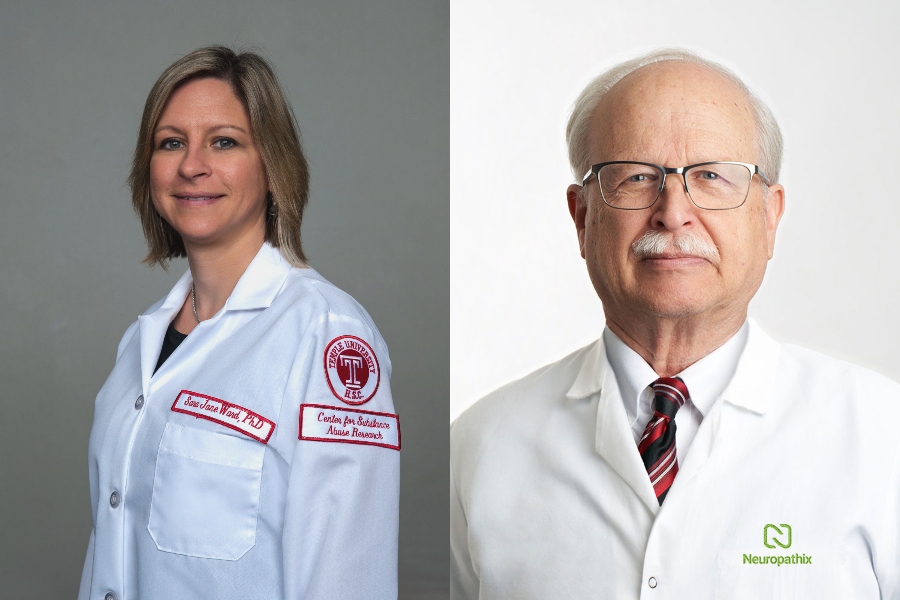 It’s no secret that America — and Philadelphia — is currently in the midst of an opioid epidemic. When a patient is prescribed the pain-relieving drugs, there’s a high chance the patient will struggle with addiction, according the CDC. And according to the Substance Abuse and Mental Health Services Administration, prescription opioid misuse was the second most common form of illicit drug use in the United States in 2018. In addition to being highly addictive, prescription opioids have not yet demonstrated pain control over the long term, as they are currently only shown to be effective for severe acute pain.

For these reasons, researchers everywhere have been exploring alternative pain relievers, one of them being cannabidiol (CBD), a non-psychoactive substance derived from the cannabis plant. And yet, CBD has its own limitations. Studies have shown that while CBD reduces pain sensation in animals, its ability to do so in humans is limited by low bioavailability, or the extent to which the drug successfully reaches its site of action.

Now, scientists from Temple University’s Lewis Katz School of Medicine and Doylestown-based biopharmaceutical company Neuropathix have found that a new CBD analog drug might be the key to solving this unmet medical need. When tested on mice, their compound, KLS-13019, demonstrated both prevention and reversal of chemotherapy-induced peripheral neuropathy (CIPN), a common side effect of certain cancer treatments that damage peripheral nerves, which carry sensory information to the arms, legs, and brain. (According to researchers at Temple, the severe pain caused by CIPN manifests in different ways in patients, but frequently involves tingling or burning sensations and numbness, weakness, or discomfort in the limbs.) This discovery, the study investigators say, has the potential to prevent neural damage and neural degeneration in humans.

To learn how KLS-13019 works and how it fared in comparison to CBD, we spoke to Douglas Brenneman, Neuropathix’s chief pharmacologist, and Sara Jane Ward, the study’s senior investigator and assistant professor of pharmacology at Temple University’s Lewis Katz School of Medicine.

NextHealth: How did this collaboration come to be?
Ward: I was put in touch with Doug [Brenneman] in 2012. Around that time, I was studying cannabidiol in my lab for a couple of years. One of the things that makes CBD intriguing and challenging is that we [pharmacologists] still aren’t really sure how it works. My area of expertise is in behavioral pharmacology, so what I’m used to doing is administering a compound to a mouse or a rat and seeing if that changes their behavior, but I don’t focus as much on what’s going on in the subject’s brain, [which Neuropathix does]. I became curious about how CBD works in the body, particularly how it might decrease the production of oxidative stress in cells. One of my colleagues at the time connected me with Doug because his focus is on growing primary nerve cells in culture. We started talking about how we wanted to understand CBD’s effect on neuropathic pain, and that we should use synthetic molecules that were more selective, specific analogs of CBD since CBD has all these potential mechanisms of action.

One year later, Doug [Brenneman] let me know that his chemists at Neuropathix had synthesized a compound, and asked if I was interested in testing it in an animal model. So, we began a basic screening of KLS-13019, and then received a grant from the National Institute on Drug Abuse in 2019 to initiate the animal study.

Why was KLS-13019 developed?
Brenneman: This collaboration was launched because we wanted to optimize a number of CBD’s properties. For one, CBD is not very potent pharmacologically. Also, its oral bioavailability — or, the amount that enters your system by mouth — is marginal. As a pharmacologist, I was astounded by the complexity of CBD as it interacts with what we call molecular targets, but that isn’t really a good property in our field because we work with substances that have more direct effects. In the case of CBD, there must be about a dozen targets that it interacts with, and we wanted a compound that was more precise. Last, I am concerned with the amount of CBD getting into human beings now. Why? Well, recent studies [in mice] have shown that CBD can adversely affect the liver when taken in high doses.

Ward: There are also two different ways pharmacologists test whether or not a compound will be effective for chemotherapy-induced neuropathic pain: the extent to which a compound can prevent that pain from ever developing or the extent to which it can reverse that pain after it’s already present. Most of my work with CBD in my lab had been looking at prevention because it’s easy to identify when exactly the pain will occur (after chemotherapy). But there’s a much larger clinical population that is already suffering from chemotherapy-induced neuropathic pain, and we wanted to develop an effective solution for them, as well.

The last piece was to determine whether there were any potential interactions with opioids for a variety of reasons. CBD is currently in clinical trials for the treatment of opioid craving, anxiety, and relapse during abstinence, so we were interested to see whether or not KLS-13019 might share some of that promise. In the animal study, we monitored mice who were self-administering morphine and looked at what impact the KLS compound had on morphine-taking behavior.

How did CBD and KLS-13019 compare in testing?
Brenneman: CBD is a fatty molecule, which means it isn’t very water-soluble. We needed to create a compound that was, and in fact, KLS-13019 is roughly five times more water-soluble than CBD. As I mentioned earlier, we were also concerned about oral bioavailability. When we did a side-by-side comparison of CBD and KLS-13019 in mice, we found that eight times more of our compound got into their circulatory systems than CBD. [Note: Ward adds that KLS-13019 was also more orally bioavailable at lower doses than CBD.]

When looking at the protective properties of these two compounds, we found that they both shared one target — one that regulates calcium. This is a key aspect in neuroprotection because the regulation of calcium in a nerve cell is a critical variable in the life of that nerve cell. If the level of calcium is beyond its optimal concentration, that nerve cell will die. It turns out that both CBD and KLS-13019 work through a similar mechanism — a sodium-calcium exchanger through the mitochondria — to regulate calcium. When we tested in cell culture and in mice, both CBD and KLS-13019 were effective in preventing neuropathy prior to administering Paclitaxel [an anti-cancer treatment which can cause adverse effects, including damage to sensory neurons]. Their results were parallel in terms of preventative measures.

How did they differ?
Brenneman: In the tests conducted on mice, researchers found a dramatic difference when it came to reversing pain. CBD was found to be ineffective in reversing pain when researchers induced peripheral neuropathy via mechanical, or hypersensitivity to touch. KLS-13019 actually demonstrated the reversing of neuropathic pain [and inflammation] that had been produced by Paclitaxel, and was also effective in bringing the sensitivity reaction back to controlled levels.

Ward: Yes, exactly. It appears that CBD was very good at protecting the mice from developing the chemotherapy agent’s toxicity, but not as successful at reversing it, whereas KLS-13019 was.

What about KLS-13019’s impact on morphine-taking behavior?
Ward: Basically, we found that KLS-13019 interrupts opiate reinforcement in animals that were self-administering morphine. In other words, our compound had a way of changing and eliminating their motivation for morphine.

Brenneman: I also want to touch on the main difference we found between morphine and KLS-13019. Morphine interacts with opiate receptors, but KLS-13019 does not. It looks like our compound prevents neuropathic pain without any appreciable interaction with opiate receptors, which shows us that it is extremely unlikely that KLS-13019 will have any addictive effects. So, we have a non-opiate pain reliever for both somatic sensory pain and neuropathic pain. This is important because it is working to solve a huge unmet medical need — there is currently nothing else like this on the market, and we think we finally have one.

What are the next steps for the analog?
Brenneman: In order to get KLS-13019 to patients, it has to go through the FDA via an Investigational New Drug (IND) application. We will be spending the next two years working toward that, and of course making sure that there is not a toxic component of or abuse liability related to our compound. If all goes well, we’ll then be able to initiate clinical tests on humans.

How do you see KLS-13019 benefiting a variety of patients, not just those experiencing neuropathic pain?
Ward: We did look at other pain models, including gastric pain. KLS-13019 was very potent at preventing gastric-type pain in mice. We plan to continue investigating other types of pain, as well as other modes of neuropathic pain aside from chemotherapy-induced, in order to [hopefully] expand KLS-13019. Also, if you think about how CBD is being proposed for a wide range of indications outside of pain, including anxiety and schizophrenia. We might test in these other preclinical models whether the KLS compound acts comparably to CBD.