Researchers modeled how the pandemic could have played out very differently in Philadelphia had evictions not been banned. 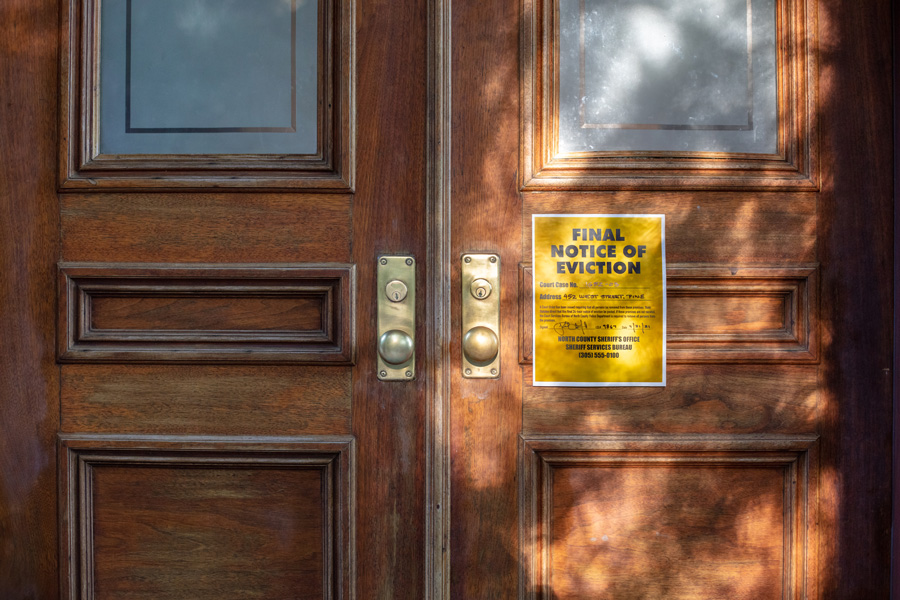 Researchers looked into how the mandated halt of COVID-19 evictions helped slow the spread of the coronavirus. Photograph by Bill Oxford/Getty Images

It goes without saying that the COVID-19 pandemic has had a significant impact on unemployment across the United States. According to a report by the Congressional Research Service, the unemployment rate spiked to 14.8 percent in April 2020 — a level not seen since the Great Depression — before declining to 6.7 percent in December. (As of this past March, it sits at 6 percent, according to the Bureau of Labor Statistics.)

Because massive unemployment has left millions unable to pay their rent or mortgage payments, cities — including Philadelphia — and later, the CDC, issued eviction moratoria in order to keep people sheltered during a global health crisis, with a goal of reducing the risk of spreading and contracting SARS-CoV-2. While organizations continue to challenge such legislation in court, a recent study led by researchers at the University of Pennsylvania, Johns Hopkins University, and the University of Illinois at Urbana-Champaign found that local and federal eviction moratoria are a “warranted and important component of COVID-19 control.” We spoke with Michael Levy, co-senior author of the study and associate professor of epidemiology at Penn’s Perelman School of Medicine, about their approach, findings, and big takeaways.

NextHealth: What prompted the research team to initiate this study?
Levy: Last July, the city of Philadelphia put in place protections against evictions under the Emergency Housing Protection Act. Shortly after, the city was sued by the Homeowners Association of Philadelphia (HAPCO). Basically, HAPCO questioned whether the legislation was of broad societal interest, or if it protected a narrow demographic (in this case, at-risk renters). At the time, I had been working with other researchers on the relationship between fusing households — mainly, quarantine bubbles — and SARS-CoV-2 transmission. We were curious as to why the [lockdown] interventions had taken so long to kick in — everything had closed down, but cases were still rising. Something we discovered is that household transmission can limit or delay the effects of control measures like lockdowns, which then made the issue of evictions during a global pandemic even more concerning.

So, defense lawyers ended up contacting us to provide evidence in support of the city’s efforts to stop the spread of infection. We started modeling in a very small way to see how eviction moratoria impact transmission of the infection, and eventually helped write an affidavit for that case. When the CDC announced they were halting residential evictions nationwide from the beginning of September through December 31st (which was recently extended through the end of June), we got flooded with requests for an evidence-based model that would help show that such policies are warranted when it comes to epidemic control.

What did that modeling look like?
It’s important to note that we were looking at what might have happened if the eviction moratoria were reversed. The study team includes many housing experts, and a lot of the data on evicted households shows that they tend to “double up” with other households. With that said, we created a theoretical metropolitan area of one million residents where everyone is in contact with people in their own households, and some in contact with those outside their household. From there, we calibrated a range of epidemic trajectories (based on ones that actually occurred across 50 metropolitan U.S. cities through September 2020) using a modified SEIR model — in other words, the probability of infection occurring each time there’s contact between susceptible, exposed, infectious, and recovered individuals both within and among households.

Regarding evictions, we had two counterfactual scenarios: one in which there’s a strict moratorium on evictions in place and enforced, and another in which evictions are allowed to resume at baseline or increased rates. As our study notes, “Many local, county, and state-level eviction moratoria that were created early in the U.S. epidemic were scheduled to expire in late summer 2020, so we modeled the hypothetical effect of evictions taking place starting September 1st and continuing for the duration of the simulation.”

An illustration from the study, which demonstrates how researchers modeled “the spread of infection over a transmission network where contacts are divided into those occurring within a household (solid gray lines) vs. outside the house (“external contacts,” dotted gray lines). Social distancing interventions (such as venue and school closures, work-from-home policies, mask-wearing, lockdowns, etc.) are modeled as reductions in external contacts (red x’s), while relaxations of these interventions result in increases in external contacts towards their baseline levels. When a household experiences eviction (red outline), we assume the residents of that house ‘double-up’ by merging with another house (blue circle), thus increasing their household contacts. Evictions can also directly lead to homelessness (orange outline), and residence in shelters or encampments with high numbers of contacts.”

What key findings did the team discover about the impact of evictions, generally speaking?
Mainly, we found that eviction moratoria likely prevent the number of COVID-19 cases, as the merging of households increases the transmission of SARS-CoV-2. We also spent a lot of time assessing the transmission risk evictions might have on those who are not directly impacted by evictions, and found that spillover impact was significant (a.k.a. increased infection rates). That helped demonstrate that eviction moratoria were in the interest of public health, not simply for a specific group, as they help reduce risk of infection for all residents.

What about in terms of Philadelphia?
Initially, our model assumed that households doubling up happens randomly throughout a city and that evictions happen uniformly. But this didn’t take into account that COVID-19 and evictions disproportionately affect poorer, minority communities. So, we adjusted our model so that it evaluated evictions and transmission in a more diverse city, and used Philadelphia as the case study. [Note: As the study’s researchers acknowledge, Philadelphia has one of the highest eviction rates of large cities in the United States. According to Reinvestment Fund, Black renters are 2.8 times white renters to face eviction in Philadelphia.]

To understand the impact of evictions and eviction moratoria on SARS-CoV-2 transmission in Philadelphia, we analyzed anonymous mobile phone data, historic eviction rates, and the prevalence of infection in different zip codes across the city. Because the amount of evictions that might have occurred during 2020 is hard to know, we simulated multiple increases to determine what would happen if the eviction rate doubled, multiplied by 10, or hadn’t stopped at all.

Essentially, we found that the greater the eviction rate, the greater number of cases that would likely result, highlighting that allowing evictions to resume would have substantially increased the number of cases among different socioeconomic populations in Philadelphia, including those experiencing a low number of evictions, by the end of 2020.

How might this study inform legislation regarding evictions — both during and after the pandemic?
Our results suggest that the CDC-mandated national order prohibiting evictions from fall through winter of last year likely prevented thousands of excess COVID-19 infections for every million metropolitan residents. That moratorium is currently being challenged in various courts across the country, and our study is able to provide lawyers evidence to defend the order.

More broadly, there is a strong relationship between housing and health — it has been well-studied in terms of environment exposures (like the presence of lead paint or cockroaches), but not so much regarding infectious diseases. I think this study demonstrates that preventing evictions from happening can help prevent respiratory infections, including SARS-CoV-2, from spreading, and provide people an opportunity to live in better health.

The CDC’s national order is scheduled to expire at the end of June. Where might this leave folks?
[Note: Because the study Levy co-authored did not seek to answer this question, Levy put us in touch with Vincent Reina, who is an assistant professor in the department of city and regional planning at the University of Pennsylvania. Below, Reina offers insight as to what might result once the order ends this June.]

Much remains uncertain about what will happen to countless renters across the country when the federal eviction moratorium is lifted. Though, the federal government has committed significant resources to localities to develop rent relief programs aimed at keeping people housed. What we do know is that renters have amassed significant debt, as they have extended all other forms of savings and credit to remain housed. A survey of rent relief applicants in Philadelphia by the Housing Initiative at Penn found that almost 63 percent of survey respondents in Philadelphia delayed the payment of other bills to pay rent, and over 25 percent went without medicine or medical care in order to remain housed. Despite making such dire tradeoffs and taking on additional debt, many renters still amassed high levels of rent arrears that put them at risk of eviction once the moratorium expires.

The City of Philadelphia requires landlords apply for rental assistance on behalf of their tenants before they are able to file an eviction, thus actively using these federal funds to support renters and owners in addressing outstanding payments. Efforts like those in Philadelphia could significantly reduce the instances of eviction, but they are not a panacea. Several cities, including Philadelphia, also have eviction diversion programs that serve as a critical tool for reducing eviction and its implications. However, even households that can access rent relief and diversion programs may still carry other forms of debt they accumulated to remain housed during the pandemic, thus impacting their overall economic wellbeing and housing stability going forward. We should not forget that our country faced a significant affordable housing crisis going into the pandemic, and this crisis was not solved by the moratorium and will be worse once it’s lifted.

Combined, this means that for many renters — particularly those with the lowest income — there are a host of reasons why the threat of eviction will dramatically increase once the mortarium expires. While efforts like those in Philadelphia are innovative and critical to reducing both the instances and implications of eviction, we need a significant ongoing federal and local commitment to housing affordability.