Temple researchers say adding two spoons of extra virgin olive oil to your diet could help stave off Alzheimer’s and other cognitive disorders. 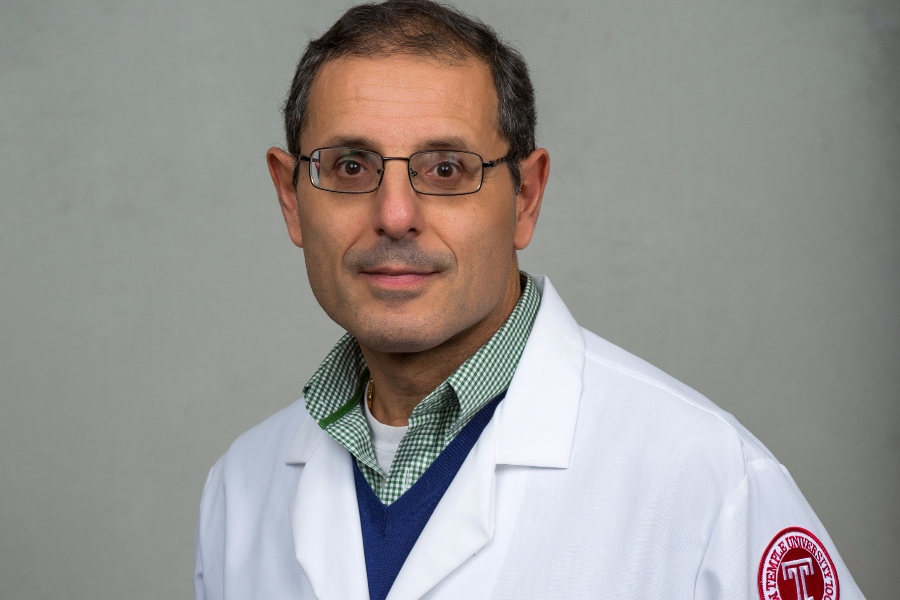 Domenico Praticò is a professor and director of the Alzheimer’s Center at Temple University. / Courtesy

A new year and a new decade are approaching, which means many people are undoubtedly looking for new ways to make their lives better in the future. Domenico Praticò, the director of the Alzheimer’s Center at the Lewis Katz School of Medicine (LKSOM) at Temple University, says the best thing you can do for yourself in the new year is to add two tablespoons of extra virgin olive oil to your diet.

It may sound odd, but this is coming from a scientist who has been studying the benefits of olive oil for more than 20 years and found that it has the potential to delay the onset of Alzheimer’s, cardiovascular disease and other diseases linked to aging — in mice. In his most recent study published online in the journal Aging Cell, Praticò’s team found evidence that extra virgin olive oil can defend against a specific type of mental decline linked to frontotemporal dementia. Previous LKSOM research also showed that it can preserve memory and protect the brain against Alzheimer’s disease. While all of these studies were done in animal models, Praticò insists his team and other researchers have already found enough evidence that the oil can also be of benefit to humans.

NextHealth PHL talked to Dr. Praticò about what he’s learned about the benefits of extra virgin olive oil in these mice model studies and how that might influence human diet decisions in the future.

NextHealth PHL: Why should we be adding extra virgin olive oil to our diets instead of other types of oil?

Praticò: There is lots of evidence in the literature that people who follow a Mediterranean diet — a diet that is followed by people who live in areas like Italy, Greece, and Spain — had a much lower incidence of dementia and Alzheimer’s disease compared with people who had a regular Western diet. But we know a diet is a mix of many different components. It’s not just one food. When you think about the Mediterranean diet, it’s a combination of fruits, vegetables, nuts, and legumes that are supposed to be eaten daily and then once or twice a week you can add some bread, meat or fish.

As researchers, the question we ask is: Is there a specific ingredient that makes the Mediterranean diet unique? The one thing that stands out is the fact that olive oil is a core ingredient for this diet. Why olive oil verses other oils? Because in this area, olive oil is the most natural oil. Olive trees grow there and are unique to that area.

What led you to conduct studies about the benefits of extra virgin olive oil?

When we were thinking about how to proceed in our studies we looked to other studies, and there was a randomized clinical trial that was performed and published in England where they enrolled patients in two groups. One had a regular diet and another group, on top of the regular diet, would add extra virgin olive oil. They followed these patients for three years to test their cognition and memory ability.

We wanted to see if this would hold true in an animal model because it’s a much faster study to do. To do this in humans, you’d need two or three years before you can have an answer. The animal model that we use in our lab can give us an answer within eight to ten months. First, we wanted to know: Can extra virgin olive oil influence the onset and the progression of Alzheimer’s phenotype in our model? The second question: If the answer is yes, how does it happen? What’s the mechanism? This is something that you can only determine with an animal model. That’s why we performed these studies.

What did your studies in animals find?

Extra virgin olive oil is a natural activator of autophagy, the body’s way of cleaning out damaged cells. Lots of people have tried to create chemicals that activate this process, but they often have a lot of side effects. What we’ve found is that, for the first time, we have a natural component from a diet that has no side effects. No one has ever died from olive oil, and it can act as an activator for the autophagic system which will clear the cells from the toxins that you and I accumulate as we get older. For us, that’s a very big breakthrough from our study.

I’ve heard certain store-bought brands of olive oil aren’t pure or have been mixed with other oils. How do you know you’re getting the right olive oil?

The extra virgin olive oil that we use for our research comes directly from the tree, from somebody who doesn’t sell to people. But my suggestion is don’t buy any blends. You need to look for two things: extra virgin, and cold-pressed. Cold press is the technique by which the oil is extracted from the olive. You can squeeze an olive many, many times and ways but extra virgin olive oil is different because it’s from the first press, which means people don’t implement higher temperatures to get more out of the olive. In other oils, they treat the seed with chemicals to extract the oil and change the smell. All vegetable oils are not made the same.

We also don’t suggest you cook with it, not because it’s bad but because the moment you cook the oil, because of the temperature, you change the composition and lose a lot of the good stuff. You must eat it the way it is, two tablespoons daily. And I know some people don’t like the taste because it’s strong, but you can mix it up with vinegar and put it on your salad but cooking with it causes you to lose a lot of the health benefits.