WindMIL Therapeutics is targeting marrow-infiltrating lymphocytes (MILs) to create a treatment to destroy cancer cells in patients, no matter their tumor type. 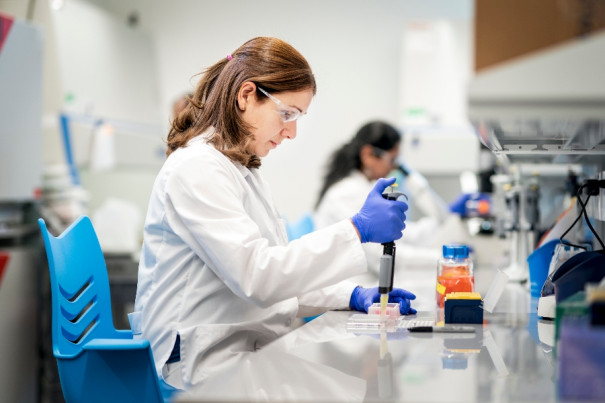 Who: Over 20 years ago, Kimberly Noonan began studying the interactions of T cells (white blood cells that play a significant role in the immune system) in bone marrow in order to find more tumor-specific immunotherapies for cancer. For a long time, she and other researchers were focused on peripheral blood lymphocytes of myeloma patients — the current standard for cell therapy — but that wasn’t proving to completely treat the disease. Then in 2004, Noonan, while working with oncologist Ivan Borrello at Johns Hopkins University, shifted away from peripheral blood and looked instead at bone marrow — a decision that catalyzed a groundbreaking discovery. They found that cancer patients’ bone marrow contains a higher number of antigen-specific memory T cells than peripheral blood does, and those T cells can be activated and expanded into marrow-infiltrating lymphocytes (MILs). The result? The elimination of cancer cells.

Noonan eventually harnessed her and her team’s efforts into a cancer immunotherapy company. In 2016, WindMIL Therapeutics was officially born. Currently, Noonan serves as the company’s executive vice president and chief science and technology officer.

What: Based in both Philadelphia and Baltimore, WindMIL Therapeutics is a clinical-stage biotechnology company translating bone marrow immunology into cell therapies for cancer patients. More specifically, they are manufacturing MILs with their proprietary technology in order to provide an alternative cell source to peripheral blood T cells for CAR-T therapy.

According to the company, MILs are an optimal source of cancer-killing T cells for three reasons. First, they are naturally tumor-specific, meaning their antigen-experienced memory T cells have already spotted the intruding cancer and are therefore naturally primed to recognize and destroy cancer cells once activated and expanded. Second, their cellular characteristics make them highly cytotoxic, or efficient in targeting and killing a broader spectrum of living cancer cells, as compared to peripheral blood lymphocytes. Last, MILs are super persistent — the company’s initial clinical trials have seen up to eight years of activity post-infusion.

When: About one year after their discovery, Noonan and Borrello initiated their clinical trial on MILs at Johns Hopkins. By 2007, the first patients were dosed and, since then, 150 patients have been dosed with the cell therapy. (In the interim, Noonan helped develop vaccines for the treatment of multiple myeloma, as well as trap antibodies used in cancer and auto-immunity treatments.)

Three years after WindMIL was established as a company, they received FDA clearance of their Investigational New Drug (IND) application and proceeded with their Phase II study of MILs in non-small cell lung cancer. Within the past year and a half, WindMIL has dosed patients using MILs alone and in combination with anti-PD-1 products.

Recently, WindMIL has been working on gene-modified MILs in collaboration with researchers at the University of Pennsylvania. Their preclinical study, which is co-led by Penn’s own Carl June, compares novel chimeric antigen receptor-engineered MILs (CAR-MILs) to CAR-T therapy.

What it means: According to Noonan, the work she and her team have done has helped them better understand more about the biological advantages of MILs compared to other T cells, and expand their technology from hematologic malignancies to solid tumors. “We’ve been able to study the effect of MILs on a variety of cancers, including prostate, breast, head and neck, renal, glioblastoma (GBM), and now non-small cell lung,” she says. “They all show the same kind of specificity that we saw with our myeloma program, which means our technology has the potential to help all cancer patients, no matter their tumor type. Modifying these tumor microenvironments is important because we are creating building blocks toward more targeted immunotherapies.” Additionally, Noonan says they are looking at MILs in a donor-derived form, which would help advance patient outcomes, particularly when a donor is involved.

Why it matters now: WindMIL’s CEO Don Hayden says that while much work has been done to advance cell therapy for the treatment of cancer, current products are still limited by issues of safety as well as the burdens they place on the patient and the healthcare system. “We feel our therapies in development — both unmodified MILs and gene-modified MILs — are next-generation immunotherapies that can better address the enormous unmet needs that remain with current cancer treatments and get these potentially life-saving cell therapies to patients,” he says.