In a city with such good Mexican food, you could argue that the best taco might be the one at your neighborhood joint. But these 18 Philly restaurants warrant a trip across the city. 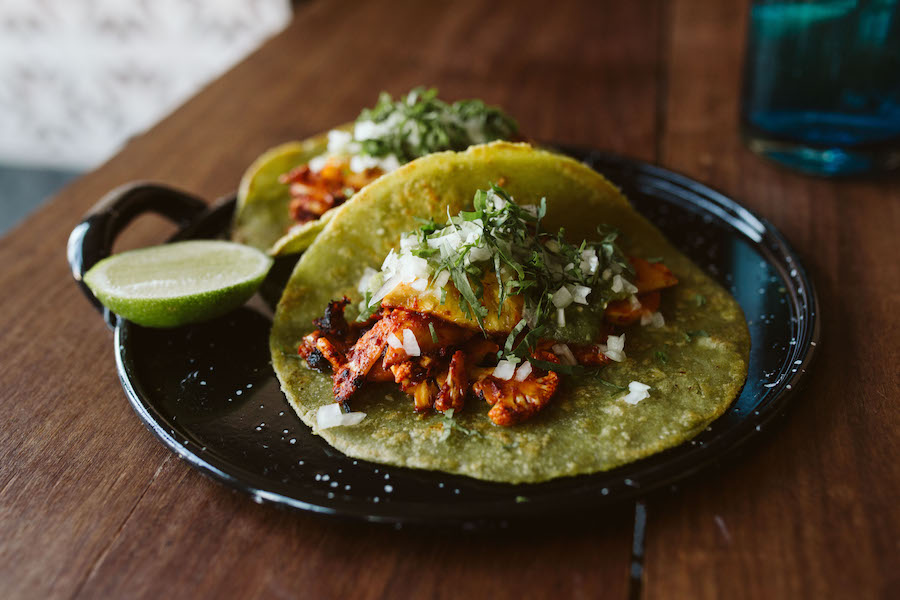 The taco scene in Philly is so robust, there’s an argument to be made that the best taco is the one at your neighborhood joint (and yes, you almost certainly have a great neighborhood taco spot.) You should still frequent that spot, but what about the tacos that are worth traveling to eat? Where are those places? If you’re looking for a particular kind of taco — tacos de canasta or mushroom carnitas, perhaps, or a flour tortilla hugging some deep fried shrimp and serrano salsa  — use this guide to find a spot doing regional specialties so well that we’d happily recommend anyone leave their neighborhood to try them.

South Philly Barbacoa, Italian Market
We loved this place before all the national awards and TV shows. You’re obviously going for barbacoa tacos — lamb that’s cooked overnight then stuffed into tortillas handmade from locally grown corn. You’ll have to wait in line, pay with cash and sit in the somewhat limited seating area, but it’s all worth it. Meat this juicy deserves your time. So does owner Cristina Martinez, a Philadelphia icon and longtime advocate for food security and immigration. 1140 South 9th Street.

Philly Tacos, Point Breeze
You’d think that with a name like that, this joint would be slinging tortillas filled with chopped steak and Whiz. But don’t let the name fool you. The man behind this place is Juan Carlos Romero, Philly’s own master of al pastor. 2011 Reed Street.

El Mezcal Cantina, Point Breeze
This sit-down Mexican restaurant opened in an old pizza shop on Point Breeze Avenue in January of 2022 with neither fanfare nor a Yelp page. You’ll see a whole range of Mexican regional influences on the menu (from coastal seafood to CDMX-style huarache) but prioritize the tiny al pastor tacos with marinated pork that’s been spinning on the trompo. These tacos come in beet-dyed corn tortillas or tortillas made with bright green hoja santa. Add on a margarita plus some punchy-acidic mazatlan aguachile and you’ve got yourself a party on a random Wednesday afternoon. 1260 Point Breeze Avenue.

Taqueria la Veracruzana, Italian Market
Taqueria La Veracruzana is one of the many, many hole-in-the-wall Mexican spots in Philly, but their carnitas are what separate this place from the rest. Each taco is filled with slow-cooked pork that’s crisp-edged and rich without tasting greasy whatsoever, then held together in a double layer of soft corn tortillas. You’ll want to eat these tacos once a week. 908 Washington Avenue.

Sor Ynez, Kensington
While there’s plenty of meat to be had here, it’s the vegetarian tacos that really steal the show at Sor Ynez, like the spit-roasted cauliflower “alt-pastor” or the mushroom carnitas, in which oyster mushrooms are cooked to crispy, meaty perfection in an oil infused with herby epazote. Tortillas are made in-house daily, and the patio is lovely, as are the well-balanced agave cocktails. 1800 North American Street.

Blue Corn, Italian Market
The cochinita pibil tacos here, Yucatán-style pork marinated in citrus and wrapped in banana leaves before being cooked low and slow, are our favorite version Blue Corn serves. But the food across the board is comforting and fresh. We also love that you can make a reservation, enjoy table service, and have a very good margarita (which isn’t necessarily the case at all of these taco spots). Note that it’s cash-only.  940 South 9th Street. 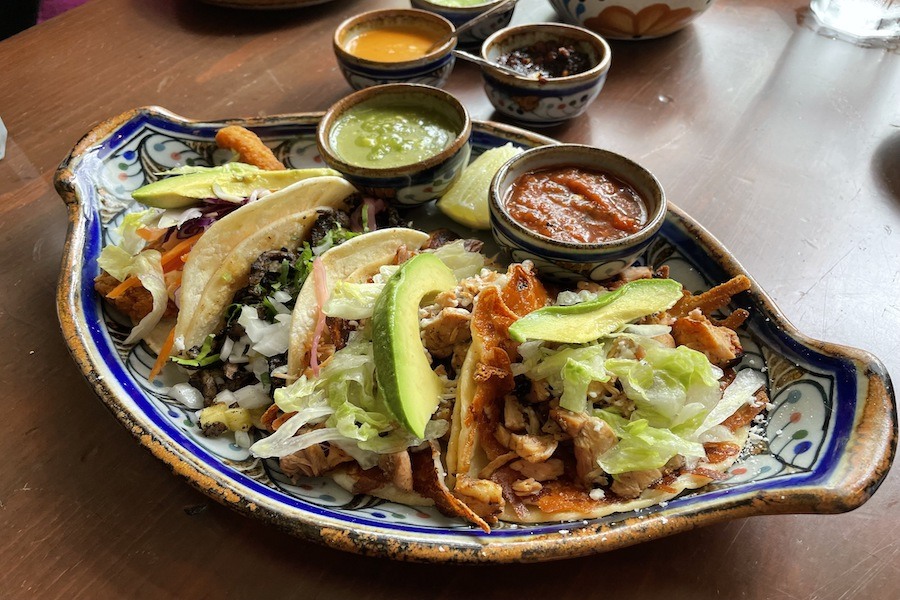 Cantina La Martina, Kensington
This 2022-opened Kensington restaurant, from the former chef of El Rey and Xochitl, Dionicio Jiménez, serves brunch, lunch and dinner in a tavern-esque corner spot with a huge outdoor patio. Of the tacos we’ve tried here (octopus and cauliflower, a pitch-black pastor negro, and crispy fried fish), the chicken taco lined with banana peppers and a layer of melted Chihuahua cheese is the most recommendable. If you have a “chicken-tacos-are-boring” bias, tell that tiny voice in your head to chill out and give it a shot. Especially since Cantina La Martina runs a daily happy hour from 5 p.m. to 7 p.m. when many of their tacos cost $1 and you can drink a $6 margarita. 2800 D Street.

La Chingonita, Fishtown
After operating as a truck throughout the city, Rebecca Baez and Omar Martínez finally opened up a brick-and-mortar in Fishtown in the spring of 2022. Now this family-owned spot is serving up tortas and tacos within a stone’s throw of the neighborhood’s main strip, which is reason enough to support them. But their Mexican food is also fresh and flavorful, especially the vegan tinga tacos and the tacos de suadero. 413 East Girard Avenue.

TacoTacoMexican, West Philly
Breakfast tacos aren’t a staple in Philly the way they are in Texas, but TacoTacoMexican offers potato, egg, and cheese-stuffed burritos and tacos every Saturday and Sunday. The eggs are fluffy, the cheese is melty, and the potatoes will give you the lift you need from whatever you did the night before. They come on corn tortillas, which isn’t very Texan, but we’re not in Texas, now are we? 261 South 44th Street.

La Canasta, South Philly
La Canasta is named for the tacos de canasta they serve each week on Friday and Saturday. Go early and you’ll be rewarded with a prize of six tacos de canasta for $10, soft and supple from a few hours steaming in their namesake basket, full of chorizo and potato, beans, or chicharron, and ready to be drizzled with salsa and scarfed as soon as you get home. 2341 South 4th Street. 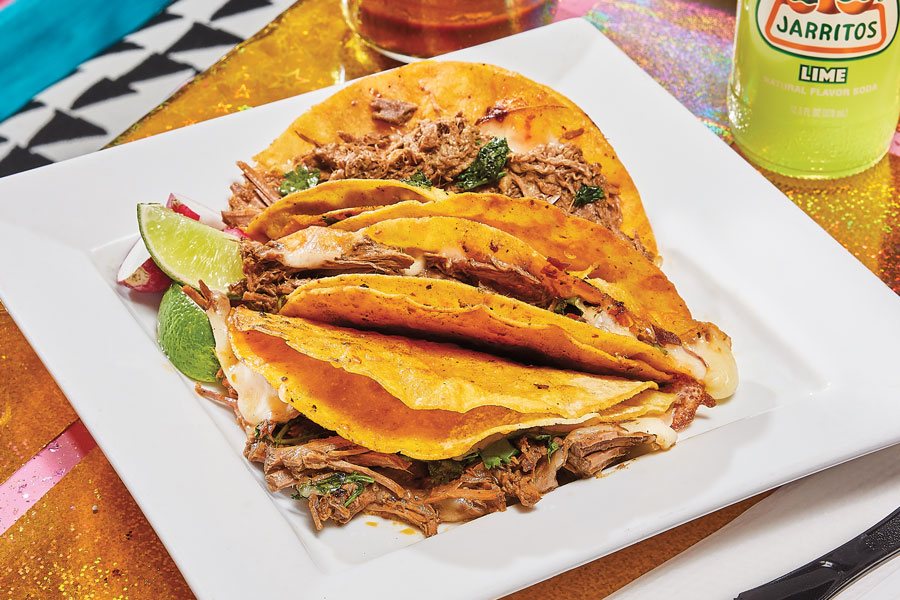 Juana Tamale, East Passyunk
Jenn Zavala finally opened a brick and mortar taco spot at the southernmost end of East Passyunk. The tacos are as good — if not better — than the ones she served all over town for years: the intersection of caramelized cheese and rich beef birria, all served with consommé for dipping. She also regular does fun specials like Taco Bell-style Mexican pizza. Keep up with the restaurant’s Instagram page for the latest on their rotating menu. 1941 East Passyunk Avenue

Tequilas, Center City
We love the casual taco spots that Philly is known for, but we also love Tequilas for challenging a norm that tacos have to be casual. This Mexican restaurant has been around since 1986, with white tablecloths and an extensive collection of agave spirits and Mexican wines to pair with molcajetes of chicken or beef served with fresh corn tortillas. 1602 Locust Street.

Taco Riendo, Kensington
With five kinds of breakfast tacos and a list of regular tacos as long as Shaq’s arm, this is the place to check out when you’re looking for a taco in Kensington, and maybe the only place if you’re looking for tacos de cabeza. 1301 North 5th Street.

El Purepecha, Callowhill
This archetypal hole-in-the-wall taco shop moved into a sleek space near Underground Arts in Callowhill with plenty of seating. Come here for the fish tacos (and fish burritos) and shrimp tacos, and stay for pretty much anything else for which you’re in the mood. Especially if that mood involves giant micheladas. 315 North 12th Street. 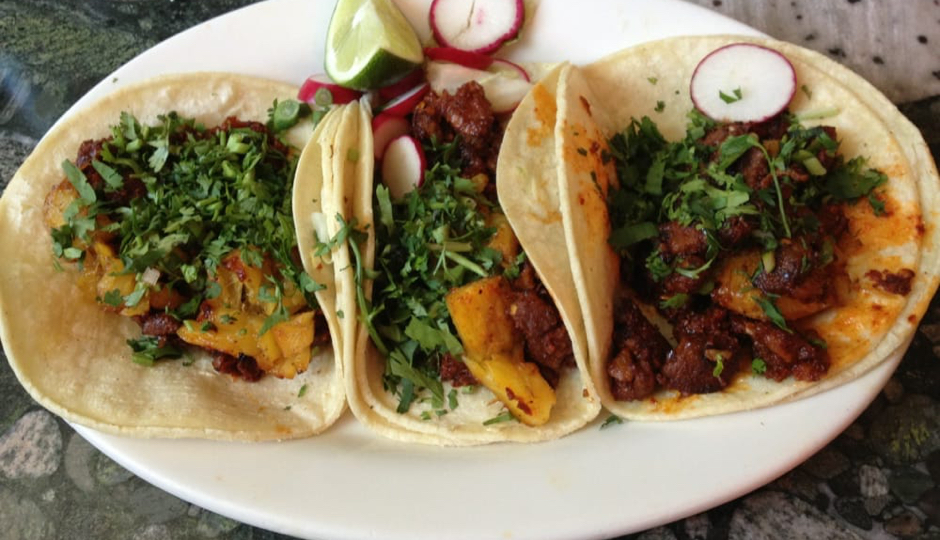 Que Chula es Puebla,  Kensington
This meat at this North 2nd Street spot is consistently flavorful (particularly the shredded chicken), but the salsa stands out even more. Choose between two options: a spicy orange version made with guajillo and chipotle peppers, and a salsa verde made creamy with avocados and tangy with tomatillos. The right choice, as it turns out, is to try both. 1356 North 2nd Street.

Taqueria Morales, South Philly
Taqueria Morales is a neighborhood restaurant where everything is above and beyond — the tortillas are made by hand every day, the proteins are all seasoned and cooked perfectly, and the grilled onions served alongside all the tacos are absolutely addictive. We particularly like the chorizo tacos, which walk the delicate line between being oily and flavorful without ever overwhelming your palate. 1429 Jackson Street.

La Llorona, South Philly
We go back to La Llorona time after time for its seafood dishes, including the shrimp tacos. Deep fried to crispy, crunchy perfection and served with a raw serrano chili salsa and creamy jalapeño sauce, these are the perfect summer dinner. 1551 West Passyunk Avenue.

Buena Onda, Logan Circle
Sure, there are other items on the menu here, but you can safely ignore everything but the fried Atlantic mahi mahi and fried Pacific shrimp tacos at Buena Onda. The theme here is a beach-inspired taco shack, and both of those fishy options nail the assignment. Even better, Buena Onda’s seafood is sustainably sourced according to Monterey Bay Aquarium Seafood Watch guidelines. 1901 Callowhill Street.