A veteran Mexican chef, a family-owned Italian restaurant in Point Breeze, and the handmade pizza oven that ties them together. 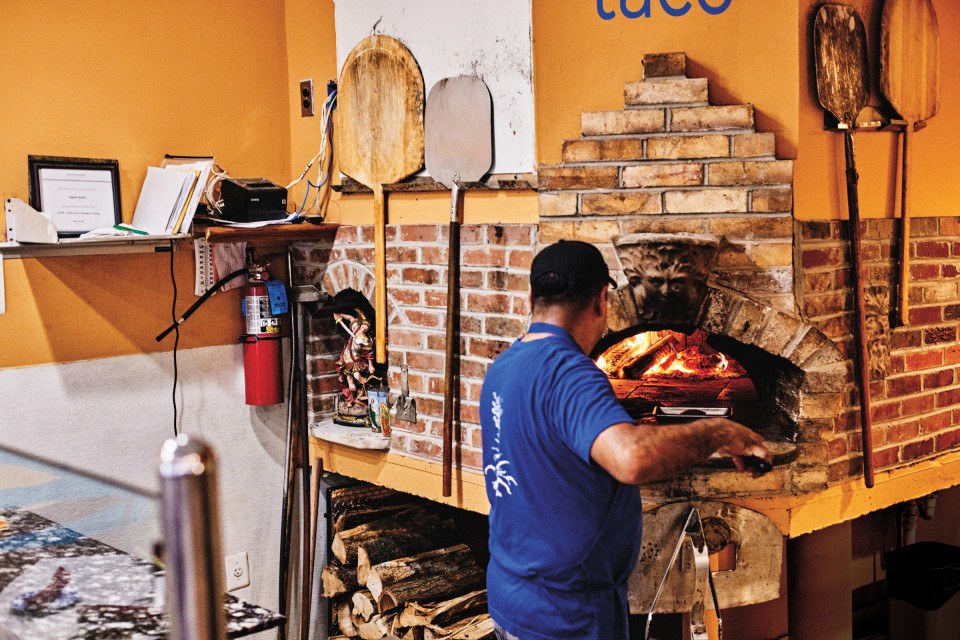 Chef Eladio Soto’s El Mezcal Cantina may have opened in January of 2022, but the space has history. Those of you who know Point Breeze might remember the spot as a loved-and-lost place called Mattei Family Pizza, featuring, among other things, a stone oven hand-built by Angelo Mattei. That oven — big and flickering, with its open mouth shouting into the dining room — wasn’t something the Mattei family could take with them when they shut down operations during the pandemic.

The oven was still there, cold and waiting, when Soto moved into the location, between a fenced-off shopfront and a closed halal grocery. Soto made the place his. Born in Puebla, with two decades in Philly kitchens behind him, he set out to remix Pueblan flavors (poblano peppers, pepitas, pork spinning on the trompo, a particular kind of mashed-up worldliness that speaks to centuries of Indigenous cooking as well as waves of trade and immigration) with modern Mexico City sensibilities. Beet tostadas. Wings rubbed with Tajín spice and lime. Whole branzino crusted with pepitas. But then there was this custom-made oven, peels still hanging from hooks on the walls, and Soto wasn’t about to let that opportunity for live-fire cooking go to waste.

Order This: Start with the camarones a la parrilla.

So whatever it is you’re doing right now, I need you to stop, head to Point Breeze Avenue, and try Soto’s camarones a la parrilla. These whole head-on shrimp come straight out of that monster of an oven. They’re rubbed with butter, garlic and adobo, then roasted and laid over a mound of whole-kernel corn soaked in more butter­ and blackened in the fire, like elote that’s been cut from the cobs. On top sits a sweet corn puree that’s half sauce, half dressing. Together with the corn in the bowl, it makes a sweet-smoky corn-on-corn slurry studded with pink, buttery shrimp you have to pull apart with your fingers.

I could smell the shrimp coming to the table from 10 feet away. The first bite was stunningly good, that oven pulling everything together, giving it a unifying bass note of smoke that I wasn’t anticipating but subsequently chased all the way to the bottom of the shallow bowl. “Why doesn’t every restaurant serve this?” I thought as I sat there cleaning every inch of the dish. El Mezcal Cantina’s camarones a la parrilla is an exaltation of ingredients, nothing more. So perfectly simple and ego-less. And that was just the first thing I ate. 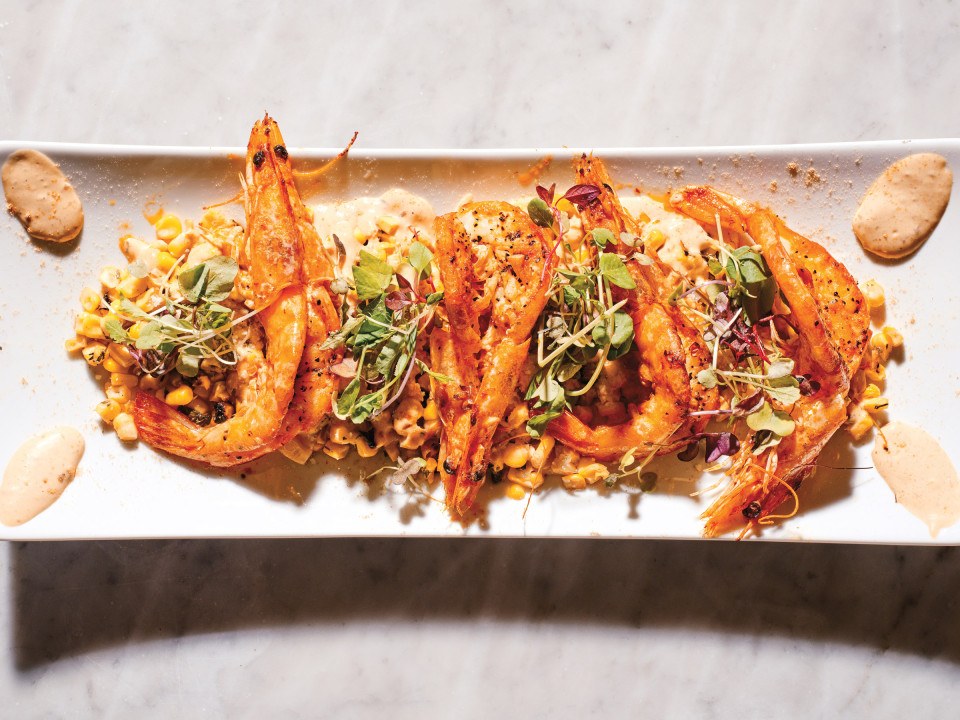 Soto shaped the rest of El Mezcal Cantina’s menu around that oven, too. He takes every advantage of the live fire and fragrant woodsmoke for dishes like rib-eye carnitas asada that taste like the midway point between CDMX-style street tacos and Carolina BBQ, or tostadas with a char that offsets the fatty slickness of fresh guacamole and sharp, vegetal heat of chilies. And yes, in keeping with the oven’s past, you can order actual pizzas topped with al pastor or roasted vegetables that run as daily specials. 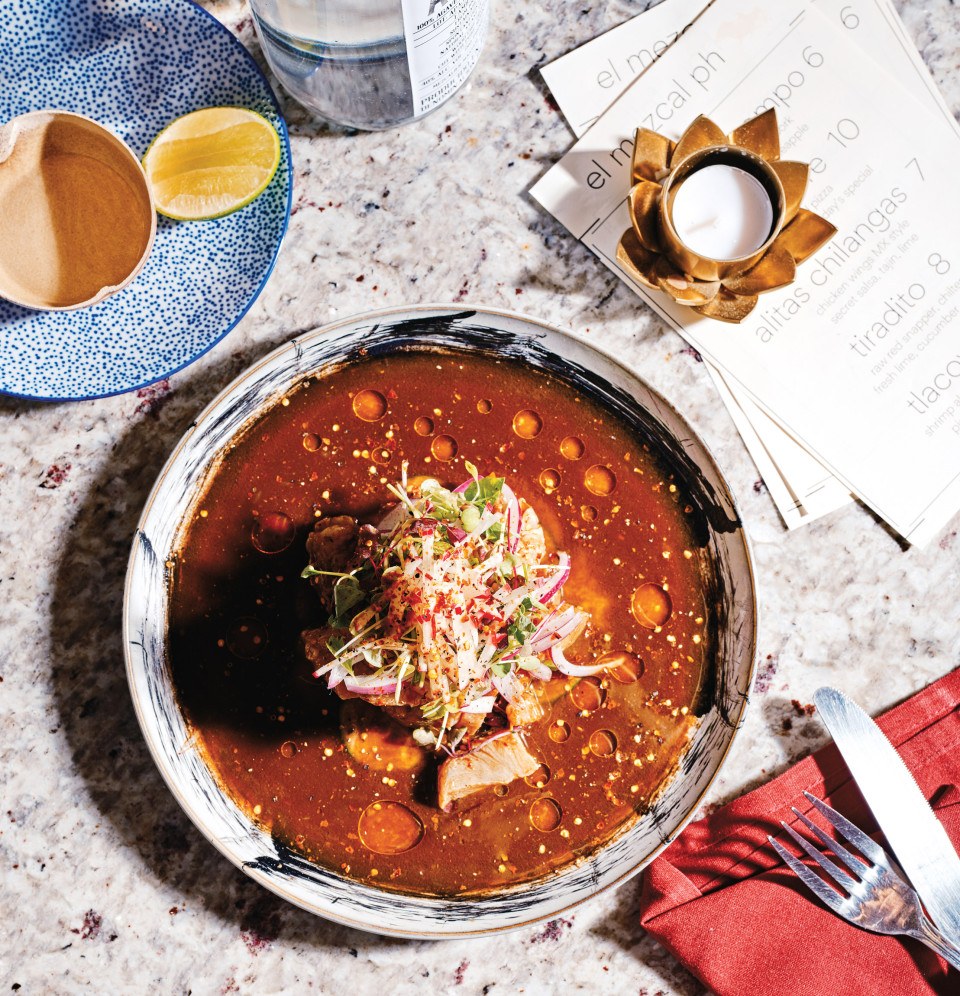 Aguachile with shrimp and red snapper / Photograph by Ted Nghiem

All this and we haven’t talked about the tacos de trompo yet — the vertical slabs of adobo-marinated pork stacked on a rotating spit, then cut off like shawarma meat to fill handmade corn tortillas warmed on the flattop. Each taco folds around the meat, with a little cilantro, some white onion — and nothing more. We haven’t talked about the entire section of the menu dedicated to a half-dozen varieties of aguachile. The tiradito is a classic — tender cuts of red snapper in a fiery chili broth scattered with chilled cucumber slices, onions, and crisp, razor-shaved rounds of radish that add just the right kind of crunch. But the El Chimeco is more interesting, made with shrimp and red snapper in a soy-lime broth, spiked with the quick-burst firecracker heat of chiltepin pepper. Kinder and milder than its aforementioned aguachile sisters, the Del Golfo version makes use of mango sweetness and a shot of Clamato. 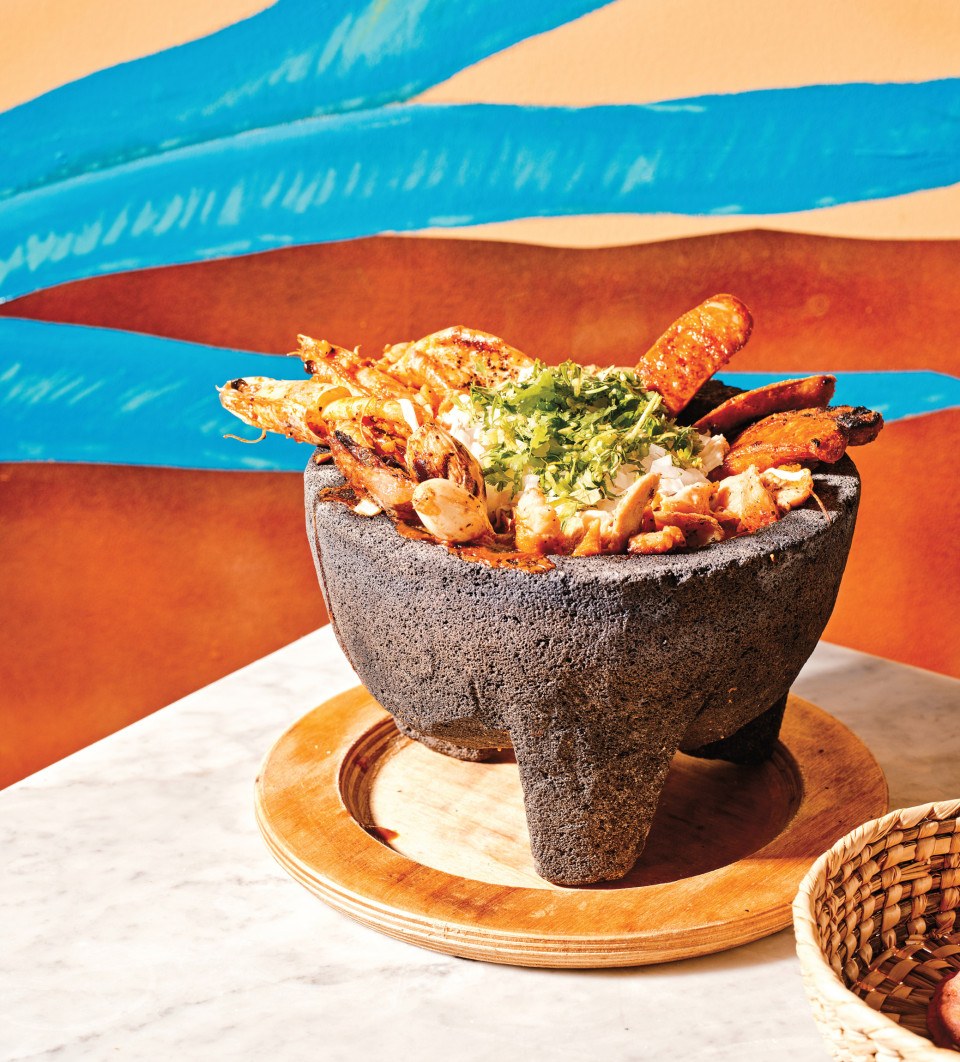 Go early, and El Mezcal can feel like a reprieve from the heat of the day — quiet and dim, seats open at the bar for sipping Dos Equis. Go later, and the restaurant draws a crowd: tables filled with people lingering, picking at the remains of huaraches and whole fish stuffed with sliced cactus and onions, the oven glowing over everyone’s shoulder. Soto has created something special in El Mezcal Cantina — a marvel that maybe couldn’t have existed under any other circumstances. It had to be this chef, with his veteran stripes and deep relationship to his hometown cuisine. It had to be this space, with its handmade Italian pizza oven. It had to be this moment — this strange pandemic year, so full of restaurant turnover, with old making way for new despite heartbreak in between — for everything to come together just right.

El Mezcal Cantina has one of the rarest commodities a restaurant can offer — uniqueness. There’s no place quite like it in Philadelphia right now. I’m not sure if there ever has been before.

Published as “Into the Fire” in the September 2022 issue of Philadelphia magazine.