At Vetri’s Fiore Rosso in Bryn Mawr, the Sizzle Distracts From the Steak

For a high-end steakhouse promising excellence, there are too many mistakes right now, and not enough heart. 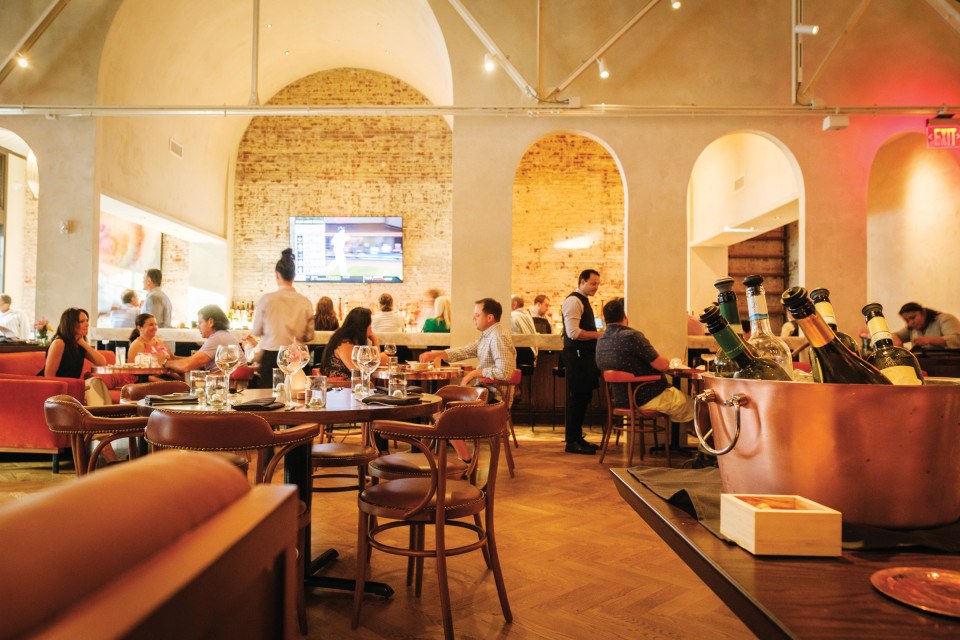 The strip loin was fantastic. Gorgeous. Hard sear on the outside, brown but not a fleck of black. Perfectly medium-rare, the center still cool and bloody. It’d been well-chosen before it ever hit the pan, respectfully handled on the line, served on a plain white plate, cut into sections so exact, I swear they were measured down to the micrometer. It was one of the five best steaks I’ve ever had. And honestly, I’m hedging a little bit here. It was probably in the top three.

Fiore Rosso, the Main Line’s new suburban steakhouse, doesn’t do a shrimp cocktail. It does grilled sweetbreads rubbed with pastrami spice and served with beet mustard. It does three prawns as massive as something that would attack Tokyo in a Saturday-afternoon matinee, scored on the grill and served whole with nothing but a squeeze of charred lemon. Instead of baked potatoes, the kitchen serves impossibly crispy potato quarters, scented with rosemary and hidden beneath an Everest of grated parmesan. There’s no creamed spinach, but there’s a bowl of huge, creamy white runner beans and Tuscan kale en brodo that’ll make it clear Popeye never visited Italy. 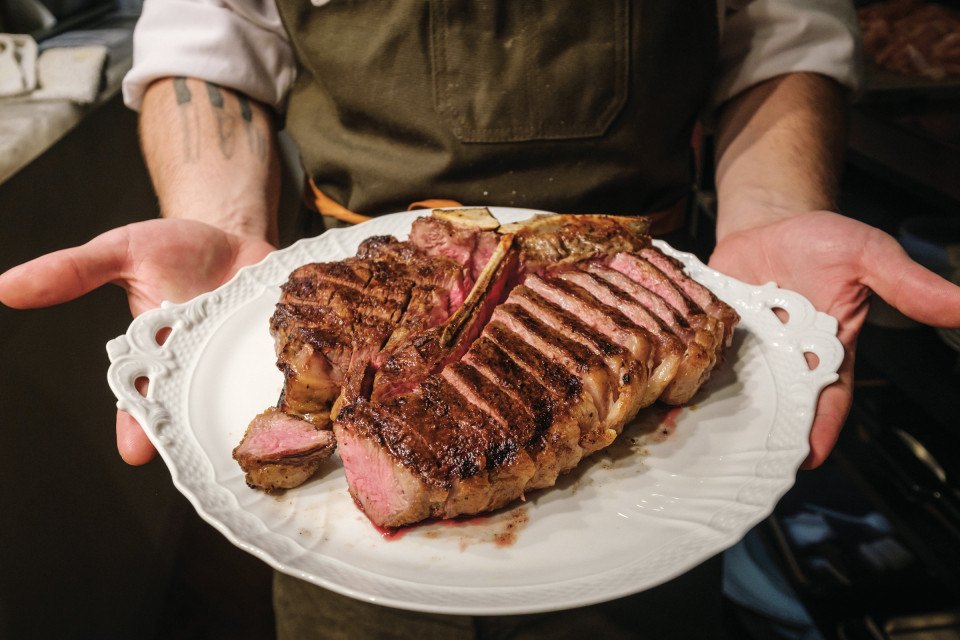 The quality of much of the restaurant’s Italian food — high-end, detail-oriented, simple and luxurious at once — isn’t surprising. After all, Fiore Rosso is a Marc Vetri restaurant, and Vetri (with help here from former­ Vernick executive sous-chef and Osteria c-de-c Jesse Grossman) doesn’t do restaurants where the food isn’t mostly­ remarkable. And usually, when a place serves dishes as stunning as that strip loin, or those potatoes, or those simple kaiju prawns, all you want to do is tell everyone you meet about the things you put in your mouth. You won’t be able to think about anything else. Best case, you won’t even recall what color the walls were or whether or not there was a door. But with Fiore Rosso, there’s so much else to discuss.

Order This: Steaks and snacks are safe bets.

I mean, there’s the Picasso. Woman in Armchair, 1948, right there on the wall next to an original Miró, both on loan from the collections of a couple of Vetri’s investors in this suburban experiment, this when-is-a-steakhouse-not-just-a-steakhouse game he’s playing for serious stakes on Lancaster Avenue in Bryn Mawr. In practice, I cared about the Picasso overlooking my meal as much as you might care about the Picasso (which is, I’m guessing, just a little), but it’s still notable that Marc Vetri has one hanging in his new restaurant. It’s something worth talking about that has nothing at all to do with the food.

Or what about the bar where they served me a gin and tonic but forgot the gin? Do I talk about the cacophonous noise echoing under the high, white ceiling? Or the feeling that the menu was like a meticulously constructed love poem written to red meat and Italian simplicity being shouted up into the rafters of a big-box store filled with art?

On the table, focaccia with ricotta thick as cake frosting and a meaty pink crown of mortadella is simple fun — the bread airy, the cheese sprinkled with crushed pistachio for crunch that brings together the whole bite. There’s fresh corn rubbed down with bone marrow like butter, swimming in a rich broth and buried under another snowfall of parmesan. I could’ve eaten this side like a main — I could’ve had two and still not had my fill. And these dishes are almost enough to make me forget the details that nibbled at the corners of my attention, snagging like a broken nail every time I thought I was slipping into the groove that marks a great dinner where everything but the table and the food and the company goes away. 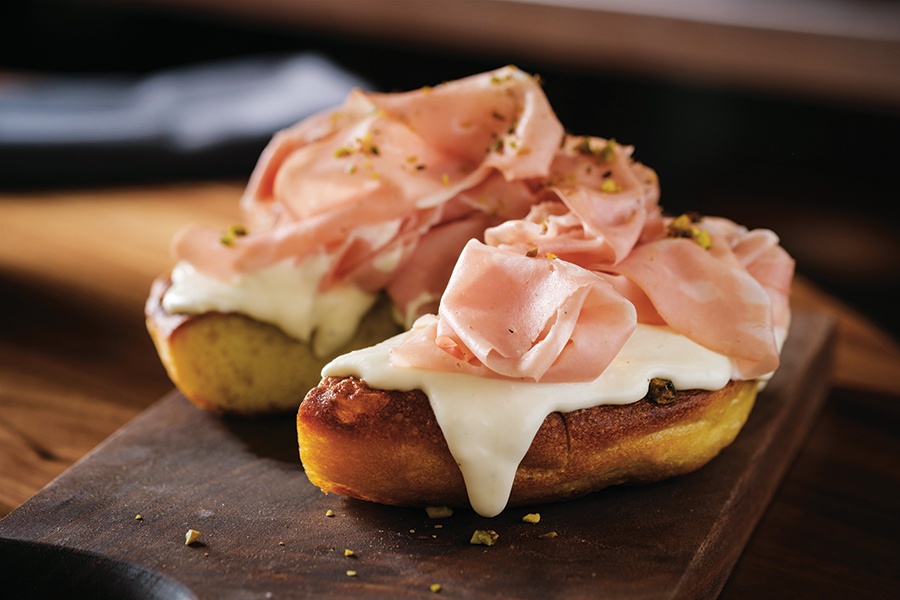 Focaccia with mortadella and ricotta

I never really got there during my meals at Fiore Rosso. Everything — even the good dishes — felt a little bit robotic, a little impersonal. An uncanny perfection to the brownness of the foccacia or the cut of the steak that made it seem like they were assembled by machines mimicking excellence. I experienced a shallowness at Fiore Rosso, a focus on surfaces, not depths, that comes off like the opposite of Vetri Cucina’s worn-in comfort or Fiorella’s chaotic warmth. And though that may be a symptom of newness or nerves, there are also dishes that simply don’t work at all. Tortelli, for example. A pretty plate, but so dull I’d forgotten about it before I even finished eating. Or the kitchen’s crab and shrimp paccheri that was nicely textured but bathed in an unbalanced, oversalted blush sauce that tasted one step above something you’d get in a really nice bottle at Whole Foods.

Fiore Rosso may settle into its new home. It may rub off some of that hard shine and someday come to feel like a chummy neighborhood hangout for those who can drop a hundo on a steak without blinking. And while there are good dinners to be had here, they come at what’s essentially an unjustifiable cost. Marc Vetri has built a clubhouse for the meat-eating suburban elite. A temple to art and commerce with dry-aged rib eyes and Picasso views. But for a place that’s staking its claim on uncompromising excellence, there are too many distractions, right now, and too little sense of a heart at the core of this machine. I’ve got better things to do with my money.

For me, Fiore Rosso’s bang just ain’t worth the buck.

Published as “Art and Commerce” in the October 2022 issue of Philadelphia magazine.