Thu Pham is a native Philadelphian, coffee queen, and co-owner of the only Vietnamese speciality coffee roaster in town. She's got strong feelings about neon-green pandan and community as a buzzword. 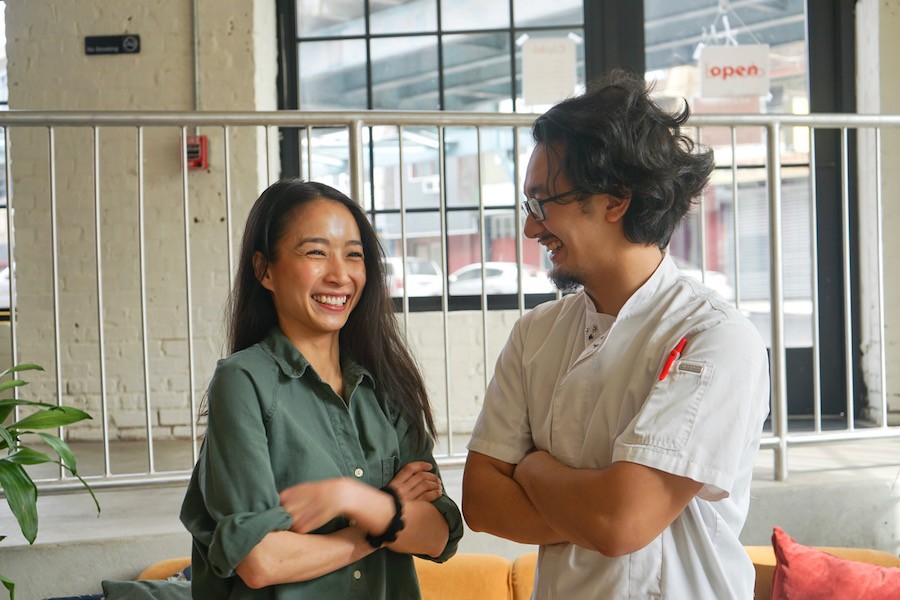 When I first started writing about food in Philadelphia in 2018, Càphê Roasters was a tiny company that I heard about a lot. People who had tried Thu Pham’s coffee drinks and beans raved about them — she was sourcing (and continues to source) green coffee beans from farms in Vietnam, then roasting them using Vietnamese coffee-brewing techniques. The combination was and still is pretty rare in the U.S., resulting in beans and coffees that are uniquely chocolate-y and aromatic. At that time, though, Thu’s coffee was only available at the occasional pop-up around town.

Fast forward to 2022 and we’re all benefiting from Thu’s caffeine ambitions. That tiny pop-up, that could have easily been confused for a casual side-hustle, was part of Thu’s larger idea for a Vietnamese cafe with a generous food menu and a social justice angle. And that’s exactly what came to be: At Càphê Roasters in Kensington, a portion of all profits benefit 12Plus, the education nonprofit where Thu worked when she originally created the business plan for the cafe.

Mission-driven philosophy aside, Càphê Roasters has found success based on the quality of their menu and the experience they’ve curated in the shop. People come because it’s great. (I’d venture a guess that most people buying their coffee and eating their food don’t even know there’s a charitable arm to the business.) The food program, run by executive chef Jacob Trinh, is one of the most interesting, ever-changing lunch options in the city. The day I met Thu at the cafe, I scarfed down a fried chicken bánh mì, an order of xôi (a sweet and savory sticky rice dish with scallions and coconut that she said was created by one of their line cooks), pandan soft-serve parfait and an icy, refreshing, peach-jasmine tea – and I barely scratched the surface.

As Càphê Roasters approaches its one-year anniversary, Thu and I spoke about seeing her business come to life, and the importance of collaboration when evolving a menu. 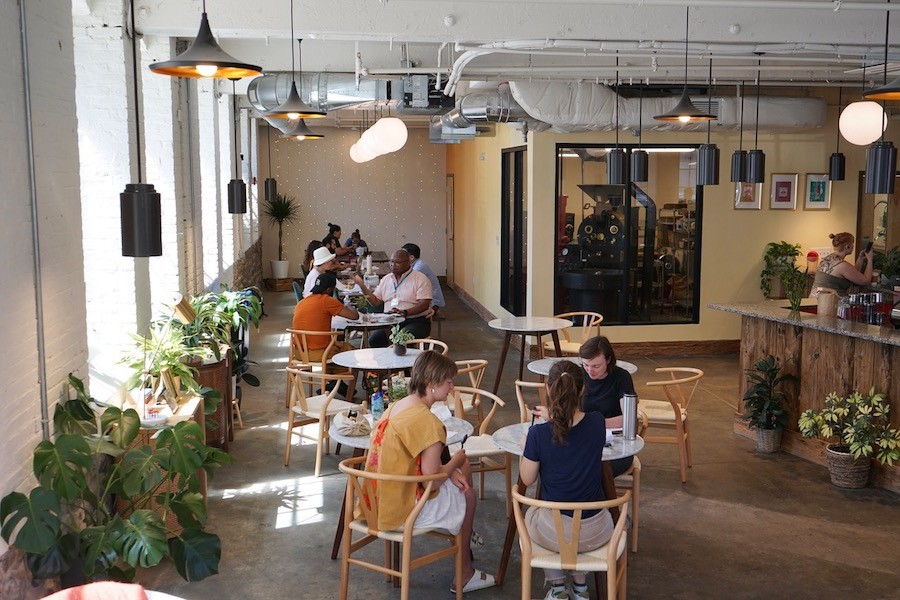 The cafe space in Kensington / Photograph courtesy of Càphê Roasters

I grew up in … Olney. My parents still live there.

Càphê Roasters started as … an idea for the Kensington Avenue Storefront Challenge, a competition launched by Shift Capital, which is a social impact real estate developer. Their goal was to basically offer this $10,000 grant to community members and social entrepreneurs to help revitalize the Kensington corridor.

At the time I was … Working for this education nonprofit called 12Plus, which basically does college and career counseling. I was always having conversations with the CEO about creative ways to funnel money into 12Plus to make it more sustainable, and then we found out about the competition and it felt like a natural fit because 12Plus was already operating in Kensington; and we thought of a Vietnamese cafe because there’s a huge Vietnamese community here. I wanted to built this more welcoming, friendly and community-based space.

When we won the competition with Shift Capital, I …  started watching a lot of YouTube videos about how to roast coffee and I bought a Whirly Pop popcorn popper.

Community is … a buzzword. People always want to create a community space. But what does that mean to us? How can we make people feel what community means to us? For us, that means good coffee, good food, good music, and something like home — just what you see like on the family wall in the cafe. The photos on the wall are not just my family — it’s, like, everybody on the team. They get to choose whatever it was they wanted to put on the wall.

We bought our first green coffee beans from … a coffee farmer in Vietnam who was a friend of some former student’s parents. There are Vietnamese methods of brewing, and then there’s coffee grown in Vietnam, and we wanted to make sure we were doing both so it’s like a true Vietnamese coffee. We have an espresso machine, but we also brew a lot of coffee in a phin, which is a traditional method.

The first place I sold coffee was … at a three-month pop-up art gallery at a space in Spring Garden.

Our first retail partner was … Riverwards Produce. Vincent from Riverwards agreed to sell our coffee before we even had bags or a real roaster.

I would describe Jacob’s and my relationship as … collaborative.

To me, collaboration means … none of the menu is mine — it’s ours. It belongs to everyone who works here, so our approach is, if there’s anything that you want to do, go for it. When I approached Jacob with the opportunity to be executive chef here, I was, like “I have a vision for the menu, but I want you to showcase you.” And for people in the kitchen, they interview with him, but there’s always a conversation afterwards with us three, where I say, “These are Chef Jacob’s ideas and creations on the menu, but there are always opportunities for you to have an impact on the menu and create a dish.”

Our most recent special that I’m excited about is … the pandan chè parfait, which is sort of like a dessert-slash-drink because when it melts you can drink it with a straw. It’s pandan soft-serve ice cream, sago soaked in coconut milk, grass jelly and it’s kind of a play on chè which is a Vietnamese dessert that’s coconut-based with lots of jellies and a lot of components. I’m so proud of it because both the front- and back-of-house team have always been like, “Let’s do something pandan, let’s do something pandan.” And I’m like, we cannot do something pandan if it’s green because a lot of places that do pandan desserts use extracts that have this fake neon-green color which I hate. You can get pandan from just the leaves, which is what we do.

I’m most proud of … the fact that this is a hopeful place, because I believe this is a hopeful neighborhood. I love that we’re still connected with 12Plus and we even employ some of my former students. People always tell me, you should be really proud of what you’re doing, but I really couldn’t have done it without everybody here.