At Mish Mish, a Breezy Mediterranean Menu and Happy Hospitality Make You Stay a While

A huge hanging apricot marks the spot for good wine and a killer millennial prom playlist in East Passyunk. 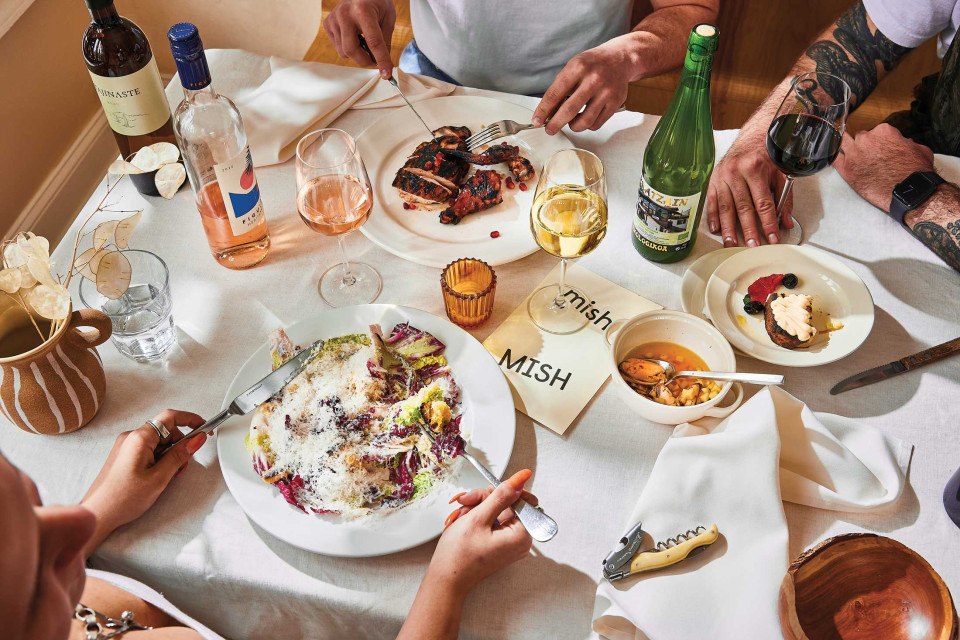 On a warm but not too warm early evening in May, East Passyunk celebrated the fleeting Philadelphia spring at the Singing Fountain, its tiers a kaleidoscope of blooms, like Florence Pugh at the end of Midsommar. Since I moved away from this neighborhood last year — and by “away,” I mean the South Philly definition, exactly one mile down Morris Street to Pennsport — I’d forgotten how, when the weather is perfect, there are few outdoor spaces in town as charismatic as this communal concrete Dorito.

Kyle McCormick forgot, too. The alum of Laurel and ITV moved “to do the whole New York thing,” he says, and cooked at Contra on the Lower East Side for six months before people started­ getting sick. After more than a year of pandemic life, it was time to come home — “but I wasn’t going to work another restaurant on Passyunk. I had done that for so long.” Then he connected with Alex Tewfik, who was opening Mish Mish in Noord’s old home and looking for a chef. McCormick asked himself, “Why am I fighting this? This is where I belong.”

A giant apricot marks the spot, referencing the restaurant’s name and what Tewfik grew up calling the fruit in his half-Egyptian household. While Middle Eastern spices and preparations appear — fruity-hot Aleppo pepper stoking­ a fire on plump grilled shrimp; scarlet muhammara wreathed in tender baby octopi — ­Tewfik hasn’t asked McCormick to be his culinary biographer. Which is why I also found a super-strong, Caesar-y radicchio salad concealed in a blanket of freshly fallen grana padano; a beet salad, long dead to me, reanimated in the presence of grapefruit, ricotta salata and crushed olives; and crispy potatoes with chili aioli that are like patatas bravas crossed with diner home fries. The menu might be most succinctly summarized as “Modern Mediterranean.” Modern because the dishes are breezy, flavorful but light on their feet, cast through a 2020s post-Healthyish lens. Modern because straight “Mediterranean” is still common restaurant shorthand for France, Italy and Spain, whitewashing the actual diversity of a fertile coastline that includes countries like Syria and Lebanon. Mish Mish serves a 12-dish slice of a region that spans more than a million square miles, resisting neat cuisine categorization and sort of making its own rules. 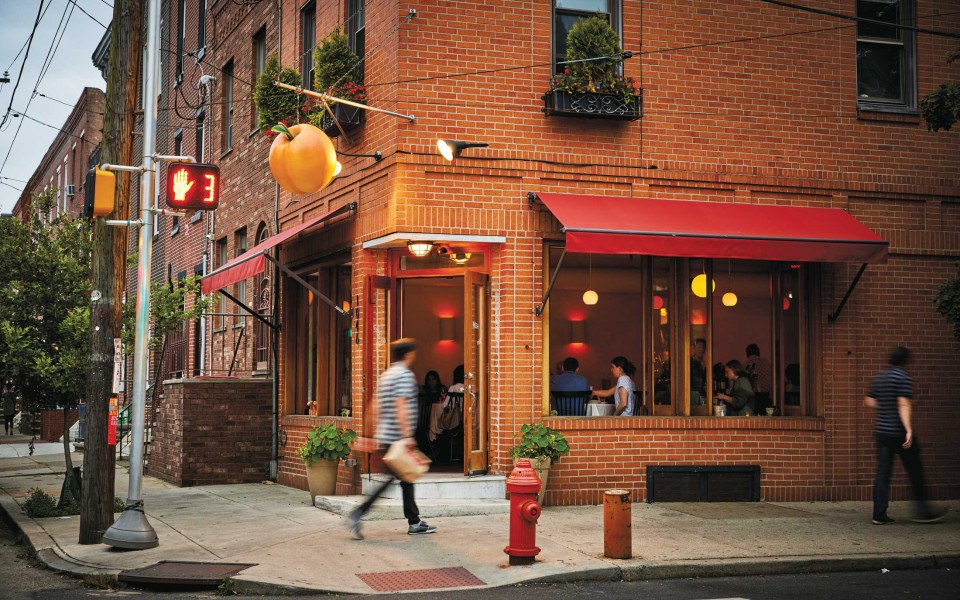 Only a luscious hunk of salmon feels like it came from another land. Paired with smoked sturgeon, potatoes, and an elegant, lightly creamed fish fumet, the entrée would make Joncarl Lachman, Tewfik’s old boss from his server days at Noord, light up like the Miracle on South 13th Street. Mish Mish proudly carries the torch of Lachman’s happy hospitality, and Tewfik is a natural heir and host. You could feel the joy coming off him, as effervescent as the bottle of Fermentery Form’s yeasty peach Fooz he popped and poured — one of several bottles on a list that offers purposefully unserious descriptions like “For beach chairs and balconies” and “Gabagoolian” in lieu of vintners and chateaux. Take the so-called “Red silk pajamas,” for instance, which describes a plummy expression of indigenous Turkish Kalecik Karasi grapes. This wine pines for Mish Mish’s pomegranate-and-tomato-lacquered half-chicken — roasted then grilled to order and served over creamy leeks. It would go just as well with the nigella-speckled fried Armenian string cheese, which looks like funnel cake and eats like a mozzarella stick.

I had every dish on the menu, of which the directionless bowl of grilled maitakes with stracchino cheese, favas and pickled rhubarb was the only under-seasoned outlier. Another­ could use a slight recast: a cup of perky marinated mussels yearning­ to be escabeche and requiring a divorce from the accompanying sourdough toast, which came frosted like a cake in lobster butter. Eating them together­ was awkward, the piped butter acting like a gutter for the marinade to run down.

Desserts include a moist, moody chocolate cake layered with applejack jelly and chocolate pastry cream as well as the extraordinary riddle the menu calls the “cheese plate (kinda, sorta).” What appeared to be a heap of pencil shavings arrived in a shallow bowl. They’re tight curls of L’Amuse gouda, and my spoon slipped into the pile and emerged with hazelnut praline, dried cherry jam and whole brandied cherries, cheese clinging to the sticky surfaces. Can a dish be both strange and completely sensible?

Chocolate cake and the “cheese plate (kinda sorta)” for dessert

I was still turning the question over when Usher’s “U Remind Me” came on the incredible millennial prom playlist. Mish Mish reminded me, after I’d moved away, how special this area is, and how special things can still happen here. They did for Tewfik and McCormick. They did for the woman whose fiancé proposed in front of the flowered fountain halfway through my dinner. The applause arrived through the open windows. She said yes. When Tewfik beamed over to ask if we were enjoying everything, I did, too.

Disclosure: Alex Tewfik, the owner of Mish Mish, held the food editor position at Philadelphia magazine through December 2021. No critic or editor who worked closely with him was involved in the production of this review.

Published as “U Remind Me” in the July 2022 issue of Philadelphia magazine.