When two Australian expats started cooking up authentic meat pies and desserts in Royersford, their biggest challenge became keeping them on the shelves. 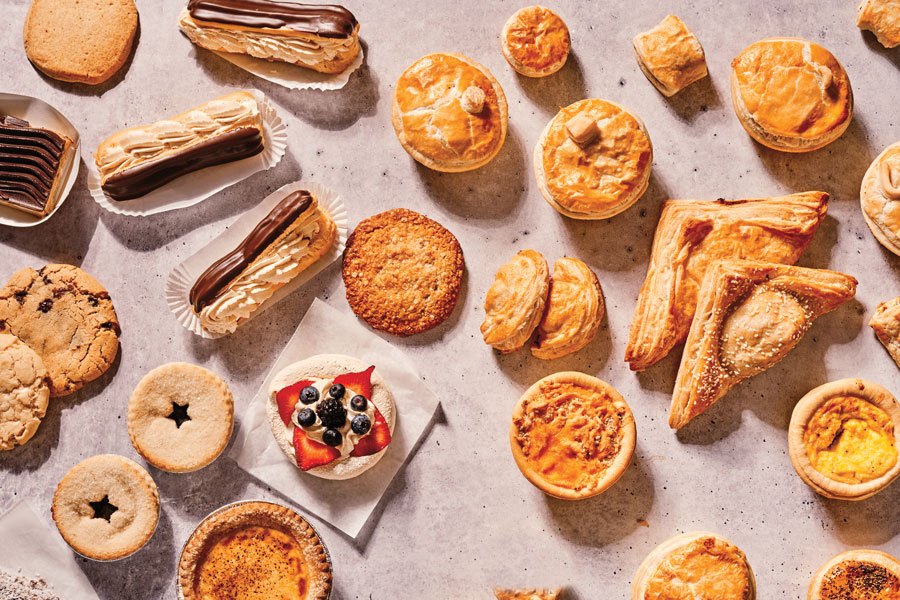 A sweet and savory selection at True Blue Bakery. / Photograph by Ted Nghiem

When I was done with my order at True Blue Bakery — the newish Australian pie shop on Main Street in Royersford — the woman behind the counter looked over my stuffed boxes and bags and asked how many I was trying to feed.

I love meat pies. To a degree that is, no doubt, unhealthy. When I worked in Albuquerque, I frequented a Vietnamese restaurant run by Chinese immigrants that made an excellent, fire-hot Jamaican meat pie. In Denver, I’d go to a fish-and-chips stand that had a side business in meat pies and bangers. In Seattle, there were no pie shops worth my time, which was just one of a thousand reasons I hated it there and will never, ever return.

Given the chance — if, someday, this job ends and COVID becomes nothing but a bitter memory — I will wander the earth like a vagabond, going from pie shop to pie shop, a smile forever on my face.

Order This: Plain pies (also called Aussie pies) and sausage rolls are the winning play here, but the desserts are stellar, too.

But for now, there’s True Blue. Roy Cooper and Fiona McPhee are transplanted Aussies who came to Pennsylvania in 2017, got homesick, and started making authentic meat pies that blew up in the ’burbs. They worked out of the Artisan Exchange in West Chester, did pop-ups and farmers’ markets, and always sold out. They made tiny fruit pies and sold out. Sausage rolls and pasties? Sold-out. They moved to Royersford because they needed more space. Know what happened when they opened?

True Blue’s plain pies are excellent, flaky pastry shells filled with ground beef and thick, dark gravy. The steak and pepper pies are for those who take their breakfast corn flakes au poivre. Eating one is not unlike tucking into Sichuan — the black pepper builds and rounds out in your mouth, stunning you for a second until you go a little numb. After that, it’s just delicious. (But seriously, the pepper is no joke).

The sausage rolls all wear soft jackets of buttery puff pastry dough. There are pasties stuffed with beef and potatoes. Bite off a corner, and the gravy runs down your chin. On some days, there are spinach and feta triangles with pine nuts, lamb and rosemary pies, chicken and veg, Southern-style sausage and gravy. Enough to keep you going for a week, easy, no repeats. And that’s not even counting the sweet stuff — tiny apple and cherry pies, lemon meringue, lamington cakes rolled in coconut.

Go early; that’s my advice. Don’t skip dessert. Meat pies are made for comfort — to sustain you across long days and dark nights — so get two. You deserve it. One sausage roll for you and another for a friend? That’s just being neighborly. And who knows when you’ll pass this way again?

Published as “Pie Piper” in the February 202s issue of Philadelphia magazine.