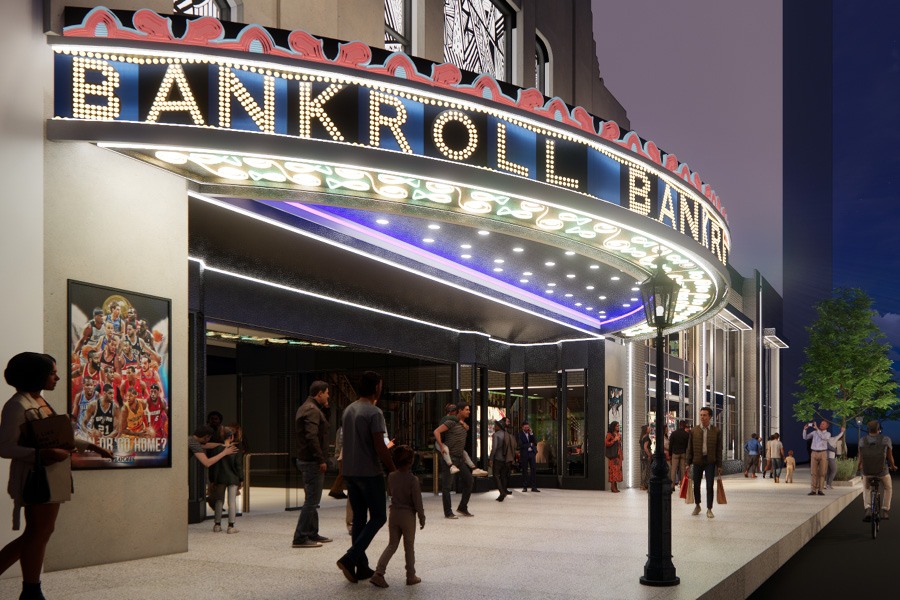 Howdy, buckaroos. Welcome back to the Weekly News Round-Up. Seeing as we’re closing in fast on Valentine’s Day (which, in a normal year, would mark the end of the post-holiday lull in restaurant world and the beginning of a return to more normal business), that’s where most of the industry’s attention is focused right now.

But even with V-Day prep and planning sucking up most of the oxygen in the industry, there’s still some non-hearts-and-flowers news happening that y’all should know about.

Starting with one of the biggest restaurateurs in the city making a 400-seat bet on Chestnut Street.

Word has started leaking out in the past couple weeks about Bankroll — a huge, multi-faceted sports-and-entertainment project going into the old Boyd Theatre at 1919 Chestnut Street in Rittenhouse. Up until recently, all I knew about the place was that it was supposed to be big (around 18,000 square feet), bold (a multi-use space with myriad operations all running under a single roof), and have something to do with sports betting.

Now, though, with the filing of a liquor-license application and some public documents, we have a few more details — one of them being that Stephen Starr will be playing a large role in the concept.

Starr has been on something of a tear lately. After a long stretch of doing nothing much at all locally, he opened LMNO (a “combination Baja-style Mexican restaurant/bookstore/art gallery/music venue with seating for 200, a live-fire grill in the middle of the main dining room, a bookshop curated by Dashwood Books, and lots of tacos”) in Fishtown in October, announced a partnership with facilities management giant Aramark in December and, now, this — a 400-seat, 100-table, five-venue sports-and-dining concept that will include everything from living room seating and individually controlled TVs to three separate bars, a full-service kitchen and sports betting via mobile devices. (Bankroll, according to representatives of the project, will not be applying for a gaming license.)

According to the Philadelphia Business Journal, there are still some zoning issues to work out. The liquor license application is still pending. And the old Boyd space has its own loooong history of troubled ownership, so there’s no saying how (or when, or if) all of these issues will be resolved. But for right now, we can say that Starr and his partners are making a big play for this particular address and concept.

And betting against Starr in Philly is never a smart move.

You folks remember back when the pandemic started, right? No one knew anything. Everything was just bad news and disasters, one after the other.

Restaurants in particular were hard-hit. Lockdowns, quarantine, fear — none of it was good for business, and all of it drove the industry to get really creative really quickly in order to survive.

In the early days, Dan Tsao (owner of EMei in Chinatown and General Tsao’s House in Rittenhouse) was scrambling just like everyone else was. He needed to come up with something that would allow him to both make a buck in this challenging new environment and help out the community.

In May of 2020, he started RiceVan — an online marketplace for specialty Asian groceries and prepared meals from Chinatown restaurants with a delivery radius of up to 60 miles. That’s enough to cover all of Philly, the suburbs, the exurbs and extend into three different states.

Last year, Tsao got some help in the form of a partnership with Eric Rosenfeld. Having worked previously with nonprofits that supported refugees and immigrants, Rosenfeld helped RiceVan expand to serve other immigrant communities in the region. And when hundreds of Afghan refugees began arriving in Philly in October, guess who was there to help?

RiceVan organized operations to cook and deliver halal meals and specialty Afghan groceries to this new community. And while they started out sourcing halal meals from outside sources, the volume was overwhelming and it soon became clear that Tsao and Rosenfeld were going to have to do this themselves.

Which is exactly what they did. Tsao gave up part of his General Tsao’s House kitchen and turned it into a separate prep station for RiceVan. They found a place to source halal meats, another supplier that had the long-grain basmati rice that forms the backbone of a lot of Afghan cuisine. They found a trained Afghan chef among the refugees in temporary housing in Center City and offered him a job. He formed a small team of refugee cooks and, together, they’re banging out enough food to provide 1,600 lunches and dinners a week to the Afghan refugee community — which is huge. There are entire restaurants that don’t even come close to those numbers in a week. And RiceVan is doing this all on its own.

You want to help support the cause? Maybe you’re just looking to have a big lunch delivered? You can check ’em out right here.

What else is happening this week?

Chris Kearse’s Forsythia is launching a French AF series with a five-course foie gras dinner called “La Fete du Foie” on Tuesday, February 8th. This is the first installment of a dinner series focusing on different aspects of French cuisine, and they’re kicking things off with a bang. We’re talking foie gras soup, foie and escargot cassoulet, a huckleberry and foie gras financier for dessert. And the house is pairing wines with every course, so it’s a chance to get a little boozy, too.

Tickets for the kickoff event will run you $125. And you’re going to want to get your reservations quick, before they sell out, so do that right here.

After shutting down at the beginning of the pandemic, Ari Miller’s Musi is reopening for regular dinner service on Thursday, February 3rd. No coincidence: That’s also the restaurant’s third anniversary — minus the 20 months or so that it spent shut down or operating as the cheesesteak-and-sides pop-up Frizwit.

The new-and-improved Musi will be open Thursdays through Saturdays for service, featuring a four-course tasting menu for $65. On Sundays, they’ll do à la carte service. There’ll also be a “Musi at Home” package with dinner for two available for pickup or delivery (with 24-hour notice) priced at $95, plus a curated selection of housemade, zero-waste items called “Musi Provisions.” Finally, for those of you who fell for his sandwiches during the pandemic, Miller will be doing regular Frizwit pop-ups at Musi on the last Monday of every month. You can get your reservations here.

Over in West Philly, the new Golden Dragon is creating some buzz among the neighbors and local cooks. It’s a Black and Asian-operated restaurant that bases its menu around affordable dishes that recall neighborhood takeout and family recipes — a potent combination that results in things like kimchi, egg and cheese sandwiches on Liscio’s long rolls, orange chicken wings, fried chicken sandwiches and tod mun fish cakes with red curry and long beans. Even better? The place is partnering with the West Philly Bunny Hop mutual aid network to help feed the community.

Love a crew that gives back to their neighbors. Check ’em out if you’re in the neighborhood.

Finally this week, y’all might’ve noticed that Lost Bread Co. just kinda … vanished overnight. The artisan bakery that lived for less than a year in the former home of Res Ipsa in Center City was shut down unceremoniously at the end of the day on January 9th. The crew got a call at the end of the shift from the director of operations at Avram Hornik’s FCM Hospitality saying, essentially: “You’re closed. Clear out.”

Turns out, the closure wasn’t because of COVID (a pleasant change), but stemmed from a battle between FCM and Lost Bread’s founder, Alex Bois. It’s actually a fascinating story of art vs. commerce, expansion vs. specialization and a cautionary reminder that, even without plagues and pandemics, the restaurant industry is a volatile, largely insecure place where shit can just turn on a dime.

Eater Philly has a great run-down of everything that happened at Lost Bread and how it all fell apart. And the only real good news here is that it looks like Bois will continue baking at Lost Bread’s former HQ in Kensington, and might be looking at a new café-bakery space (under his command) in the future.