Plus, deals at Goldie, boozy ice-cream cocktails, and a new spot for Korean fried chicken. 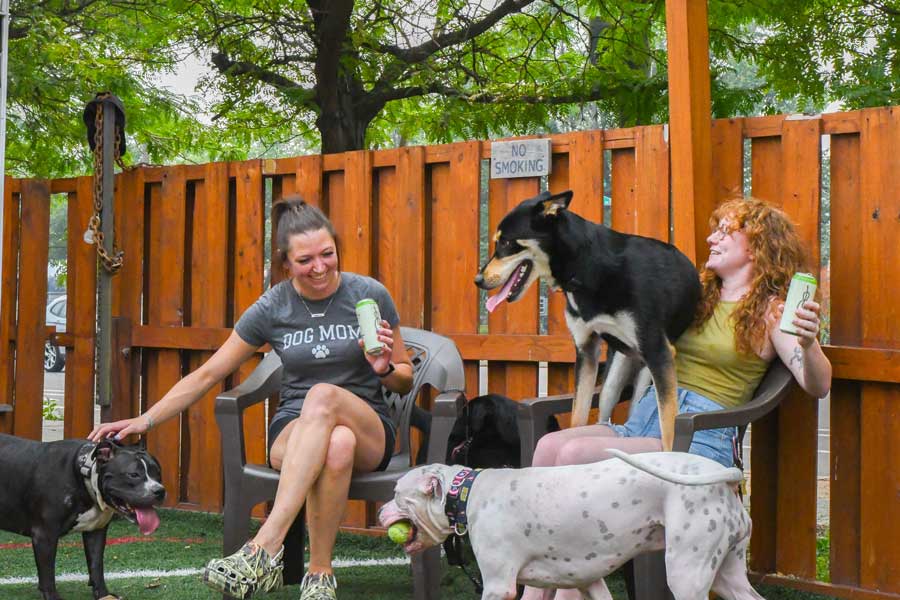 Happy Monday everyone, and welcome back to the Weekly Round-Up. Every once in a while, the News Gods see fit to show us their sense of humor by offering up their own theme for the week. Sometimes it’s tacos. Sometimes it’s everything opening in a single neighborhood. Apparently, this week they were thirsty, so they offered up nothing but liquid news (plus one thing about fried chicken).

A Booze Two-Fer in GradHo

Starting off the lineup this week, we’ve got some good news for those of you in Graduate Hospital.

First, there’s Sonny’s Cocktail Joint — the cocktail project at 1508 South Street that husband-and-wife team Chris Fetfatzes and Heather Annechiarico have been working on for the past year. Fetfatzes and Annechiarico are also the brains behind Hawthorne’s, Pivot, Quicksip, Tio Flores, Wine Dive (which we’ll get to in a second) and Grace & Proper (which they’re finishing up in the Italian Market, along with partner Jon Medlinsky of Martha, opening date TBD). Sonny’s is being pitched as the “cocktail companion” to Wine Dive — a place that takes its menus seriously, but not itself.

Which is a noble moral position, to be sure. Look for a carefully curated beer and wine list (something the team has proven themselves to be very good at), artisan cocktails and a food menu that goes the highbrow/lowbrow route with beloved comfort foods given loving, chef-y attention. In the team’s own words, Sonny’s will be an “eclectic dive bar throwing it back to easy vibes and an era of simplicity.”

And that is where I have a little bit of a problem. See, back when Wine Dive first opened, food editor Alex Tewfik wrote an eloquently scathing rebuke of its name and the un-earned appropriation it represented. “You can’t just open a dive bar,” he wrote. “You can’t just call yourself a dive bar — especially in Philly, a city with such a rich tradition of them. You can build your booths with tacky fabrics, you can nail dismembered mannequin arms and old black-and-white photos to the walls, you can cover the ceiling with mirrors. You can make the decor as quirky and as intentionally old and vintage as you want, but that won’t magically make your bar a dive.”

And I couldn’t have agreed more. The “dive” honorific is something you gotta earn in this town. You can’t just bestow it upon yourself. And even though Sonny’s isn’t putting it right there on the sign like Wine Dive did, the team is absolutely doubling-down on the intent by self-identifying as a dive before the doors have even opened.

But whatever. Maybe I’m just turning into a cranky old man.

Semantic debates aside, Sonny’s looks really good. It’s got a proven team, some nice outdoor seating and its heart in the right place which counts for a lot. There’s a media/VIP grand opening party on the evening of Wednesday, August 5th (which is also being used to celebrate the re-opening of Wine Dive next door which is a little weird because Wine Dive is already open). But after that, it’ll be nice to have these side-by-side boozers to check out next time I’m in the neighborhood.

Earning Your Shakes at Goldie

Normally, I don’t use this space to huckster for restaurant promotions, but this one was just too good (and too weird) to let go.

You guys know Goldie, right? Michael Solomonov’s wickedly good shake-and-falafel operation? Goldie has been popular pretty much since the minute it opened — which I know because I was there and waited in line for like an hour just to try it out.

Anyway, the CookNSolo team has started their own rewards program called Goldie Rewards and it works like this: You sign up for the rewards program (either in store following a purchase, online at goldiefalafel.com or by downloading the Goldie app), you buy something at Goldie, you get rewards. A dollar spent equals one Goldie Gelt (yeah, I like the name, too). A hundred Goldie Gelt equals $5 off your next order, which basically means a free tehina milkshake in whatever flavor you prefer (though the correct answer is, of course, Turkish coffee).

Yes, with an app already up and running, this is basically like Wawa Rewards but for falafel and fries. And yes, that is just as awesome as you think it is. Goldie has three locations right now (Sansom Street in Center City, Franklin’s Table on Walnut and the Whole Foods on Pennsylvania Avenue), but a program like this? It’s meant for volume. Which leads me to believe that maybe Solomonov and company are looking at a big expansion once, you know, all of this *gestures at literally everything in the whole damn world* calms down a little bit.

Ice Cream Cocktails at Art in the Age

The weather has been hot as hell lately. And while Philly has plenty of creative ways to cool down when the mercury starts to rise, here’s one that tastes a whole lot better than a mouthful of dumpster pool water.

On the weekends, the crew at Art in the Age (116 North 3rd Street) are now mixing up ice cream and cordial cocktails. In collaboration with local ice cream phenom Milk Jawn, they’re selling a variety of cool cocktails (see what I did there?) made with both their own spirits and some cordials from local distillers. There’s a coffee-on-coffee mixture using Milk Jawn coffee ice cream and New Liberty’s coffee cordial; a piña colada riff with pineapple/coconut ice cream soaked in Thai Twist cordial from AITA; berries and cream with vanilla ice cream and Mountain Berry cordial; and a bunch of others. The concoctions will run you $8 to $10 depending on the spirit (AITA is pouring a couple of high-end bourbons and apple brandies for those of you who want to get fancy) and they’re served all day for as long as supplies last. 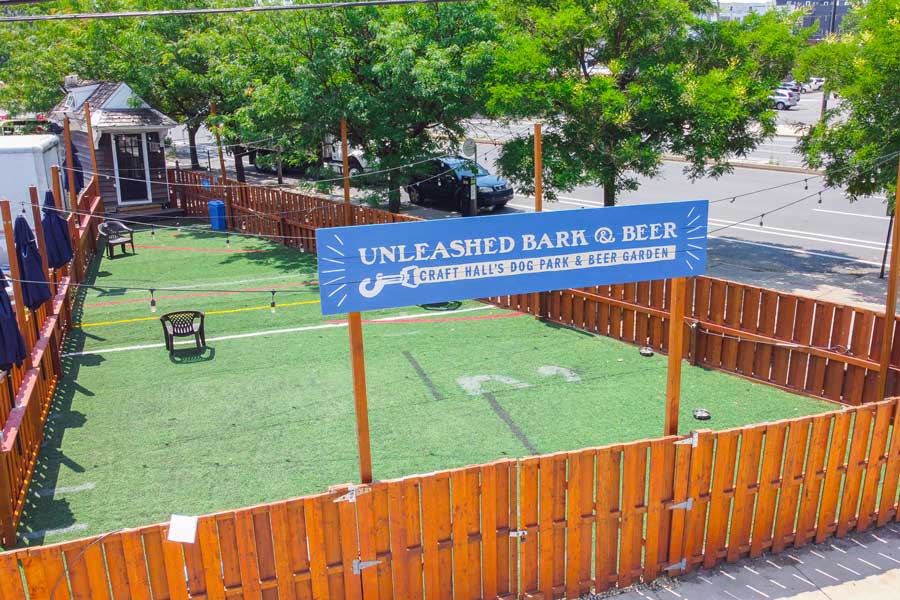 Beer at the Dog Park (Or Dogs at the Beer Garden)

No, for real. On Friday, Unleashed Bark and Beer was opened to the public — a place where dogs can play off-leash and their owners can sit, relax and chill out with a beer or two. And FCM Hospitality (who operate Craft Hall) went all-in on this project. Sure, there’s more than 2,000 square feet of secured, fenced yard for the doggos (and their owners) to play in, made with upcycled turf from Alvernia University’s football field, but that’s not all. There’s beer and wine available, contactless ordering with delivery to the park’s front gate, custom cocktails for the humans and dog cocktails for the pups. If you get hungry, there’s the Puppy Porch which is an outdoor, dog-friendly extension of Craft Hall with its own entrance, seating for 40, a full bar and access to the whole Craft Hall menu. And if the doggo gets hungry, there are dog treats from Lost Bread Co. available, too.

Seriously, it’s a lot. And all of it seems awesome. There are happy hours (“Yappy Hours,” natch) scheduled in the future, pet adoption events. The dog cocktails — Barkberry (blueberry), Puppy Colada (pineapple) and Puppy Power (a veggie smoothie) — are cool enough all on their own, but FCM seems to have really swung for the fences here. You can get more info by checking out Craft Hall’s website and make plans for you and your friends (two-legged and four-legged varieties) to visit this weekend. 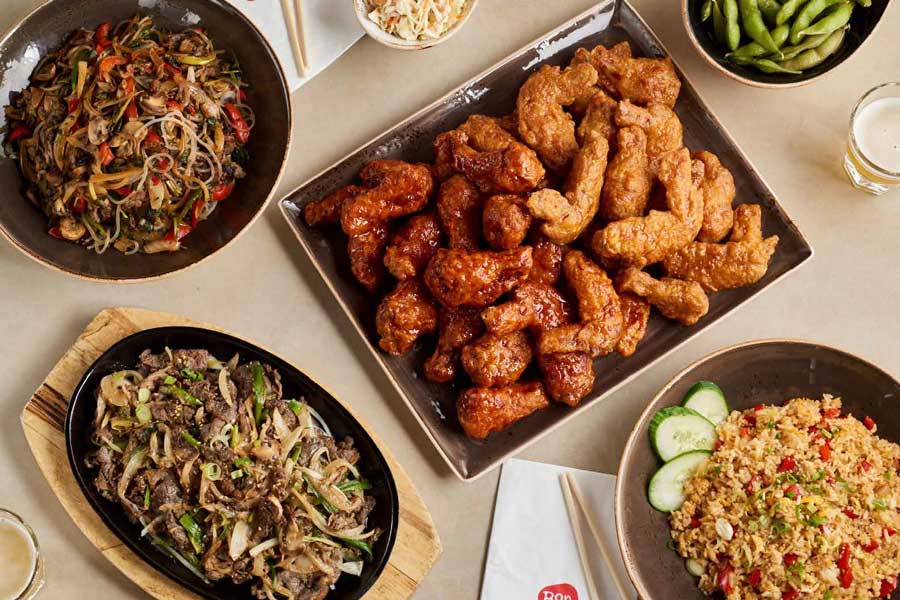 And Finally, Some Fried Chicken News

So we’ve had a lot of city news this week. But I don’t want all you good people out in the ‘burbs to think I’m ignoring you, so how ‘bout this?

Bonchon just announced that they’ve just opened their newest Korean fried chicken destination in the region, and guess where they put it? Right at the King of Prussia mall.

This is their fourth Pennsylvania spot (they’ve got two in Philly and one in West Chester). In addition to their signature double-fried chicken, they’re offering a full menu of specialties like kimchi, bulgogi, japchae, shumai, pork buns and potstickers.

The new location opened last week, but they’re celebrating their grand opening on August 8th with giveaways and free custom tee-shirts for anyone spending $30 or more — which is nice, I suppose, but really, I’d be happy enough with just the $30 worth of fried chicken and pork buns.