You Can’t Just Call Yourself a Dive Bar

There are many great things about Wine Dive on South Street. Its name isn’t one of them. 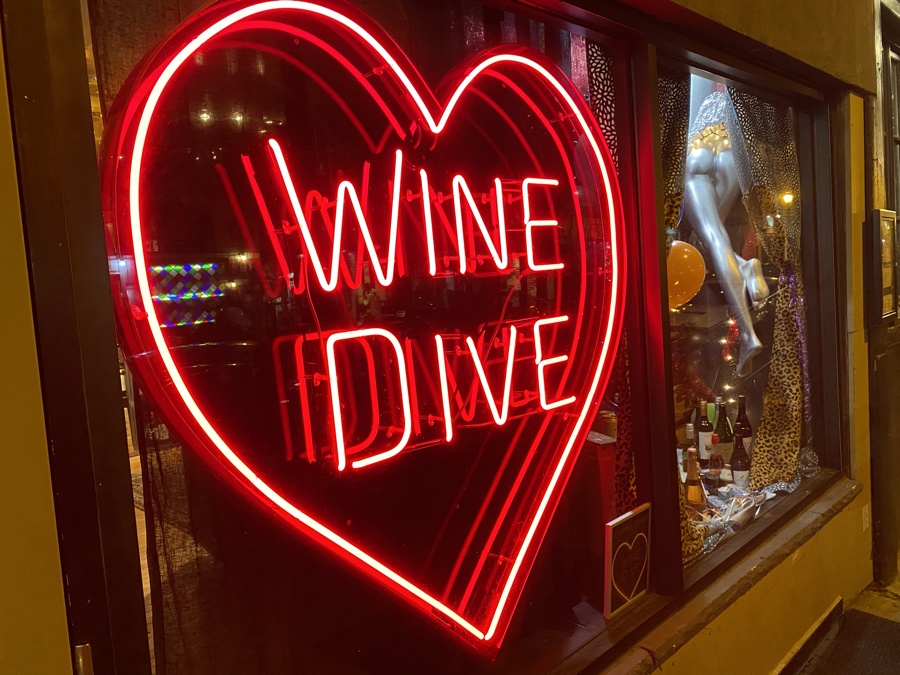 I keep going back to this quote Aimee Olexy gave me back in 2017 when she was opening the Love in Rittenhouse with Stephen Starr. We were going through the motions, the usual restaurant opening docket: the name, the chef, the menus. But when I asked her about the overall concept of the Love, she said, “Restaurants are what they are. They evolve out of the people who go to them.”

I think about that a lot, doing this work. Chronicling a city’s restaurant and bar scene (and with it, that city’s changing tastes) can be very tricky, because people — Philadelphians especially, proud as they are — don’t like it when other people define who or what they are. Restaurant-industry people? They’re as sensitive as can be to this stuff — to the written oversimplifications and considered generalizations of their work.

Take, for example, the Irish Pub & Inn in Atlantic City. Years ago, its owners sued Metrocorp, Philly Mag’s parent company, over a blurb in our A.C. Now publication that called the place a “dive bar.” According to the Inquirer, the suit included a statement from a consultant claiming that the “dive” tag was “dangerous and life-threatening to this business.” Larry Platt, Philly Mag’s editor at the time, responded, “This is a case of a place that can’t take a compliment.”

I suppose they needed a bit of that Olexy wisdom. Because it’s the diners and drinkers who get to make the final call about an establishment. Try as the owners might with names and branding and decor, in the end, we decide what a restaurant or bar is and what it means to us.

Which is why I have a problem with Wine Dive on South Street.

Not the bar itself. In fact, I really like Wine Dive. Historically, wine bars in Philly have served too niche an audience, rendering them unsuccessful or inaccessible. Chris Fetfatzes and Heather Annechiarico (who also own Hawthornes, Tio Flores, and the Cambridge next door) seem to have cracked the code — the bar was three deep! On a Tuesday! — by hiring a crew that knows its way around white riojas just as much as it does craft cocktails and beer. Here, a $2.50 can of Hamm’s shares the same real estate as an organic white from Sicily and nobody bats an eye. The Red Bull mini-fridge sits right under a handwritten menu on the wall that reads “bordeaux blanc.” It feels like a fever dream, but I like it.

No, my only problem with Wine Dive is the name and concept. Because you can’t just open a dive bar. You can’t just call yourself a dive bar — especially in Philly, a city with such a rich tradition of them. You can build your booths with tacky fabrics, you can nail dismembered mannequin arms and old black-and-white photos to the walls, you can cover the ceiling with mirrors. You can make the decor as quirky and as intentionally old and vintage as you want, but that won’t magically make your bar a dive.

You earn dive-bar status. You stick around for years with your head down, indifferent to the allure of trends and fads. It takes decades to cultivate a legion of regulars. Decades of being part of the community; of keeping menu prices down even when neighboring bars raise them; of maintaining the decor untouched, sprucing it up only for the holidays. Decades and decades until suddenly, finally, you’re timeless. Tenured. The way Fiume is in West Philly, with people sitting on trash-picked rolling computer chairs and drinking Belgian brews and Citywides. The way Oscar’s is in Center City, where they still give Long Island Iced Tea the respect it deserves. The way Bob & Barbara’s is (right across the street from Wine Dive), with its PBRs and pickle-backs. They were what they were — whatever they were — when they first opened, and they stayed true until, eventually, they turned into the dives they are today — because of the people who went to them.

And as fun as Wine Dive is, there’s this icky feeling of line-skipping once you’re there. A new-old bar tainted with faux patina? Quirk for the sake of quirk? It’s a little unsettling. Well, it is if you think about these things — about the significance of durability in a relentless and unforgiving industry like this.