From “Philly-Style” to chocolate-dipped to floats, this city’s been keeping deliciously cool since Colonial days. 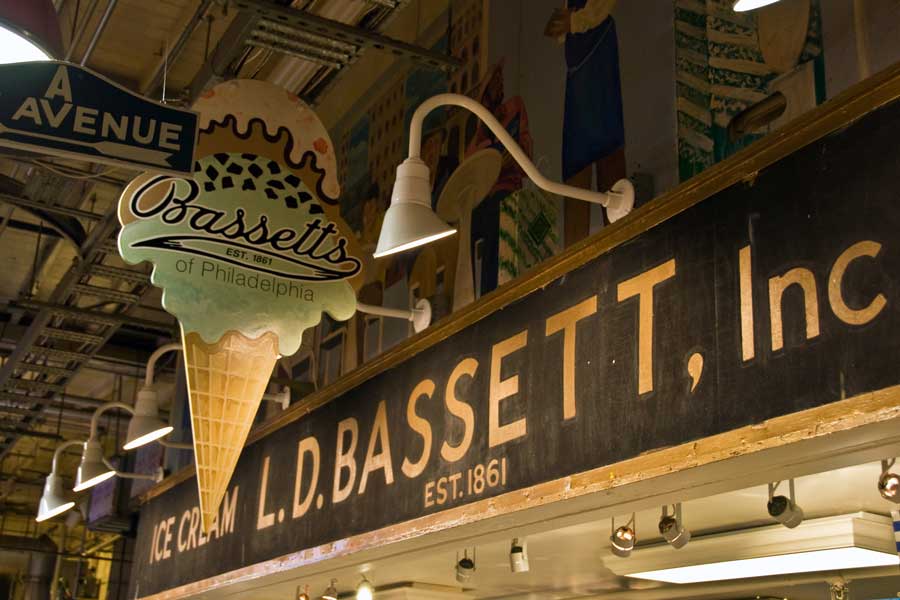 I scream, you scream, we all scream for ice cream when the weather gets summery and sultry. I mean, who doesn’t love ice cream? Chocolate, vanilla, Bing cherry, mayonnaise … take your flavor pick! While the cool stuff is variously said to have been invented in Persia, or Rome, or in the Mongol Empire (hello, Marco Polo!), the truth is lost in the sands of time. An Indian poem from the fourth century CE describes the endothermic effect that utilizes salt to lower the temperature of ice and draw heat out of cream, allowing it to freeze; early culinary artists also added honey and flavorings to snow rushed down from mountains to make a sort of sorbet.

The Quakers who settled Pennsylvania knew how to make ice cream and brought their recipes with them; Ben Franklin, Thomas Jefferson and George Washington all served and enjoyed it. During Prohibition, ice-cream parlors substituted (sort of) for bars and taverns. Home refrigeration brought an explosion in flavors and brands (Baskin-Robbins, anyone?) from the 1950s on. The long history of creamy deliciousness has a number of Philly highlights. Scoop out a bowlful to eat while you read on.

1. That Time We Created Our Own Style

Sure, Chicago has its own pizza, and New York’s famous for bagels. But Philly has an entire ice-cream style to its name. “Philadelphia-style” ice cream is ice cream made without eggs, as opposed to the richer, custardy “French-style.” What’s Philly got against eggs? Nothing, as it turns out. In the olden days, anything labeled “Philadelphia” simply meant “high-class” or “high-quality.” No less than the New York Times decrees that this production method “allows the flavorings to shine through.”

2. That Time a Black Philadelphian Became Known as “the Father of Ice Cream”

Okay, the historical record is a wee bit scanty. But what’s known is this: Augustus Jackson, a chef for James and Dolly Madison at the White House in the early 1800s, later came to Philadelphia and opened a confectionery. He brought with him from the White House the recipe for ice cream, which Dolly was famous for serving there. (There’s still a brand named after her.) Jackson’s big contribution was improved manufacturing methods — in particular, his addition of salt (endothermic effect!) to the ice used in churning Dolly’s recipe. From his catering establishment on St. James Street between 7th and 8th, he sold enough quarts at a dollar apiece to earn the sobriquet “the Father of Ice Cream” and, according to a 1930 report from the Inquirer, become one of the wealthiest men in Philly.

3. That Time a Philadelphia Woman Patented the Ice-Cream Maker

Nancy Maria McDonald Johnson wasn’t born here, but she was living in Philly in 1843 when she was granted a patent for a hand-cranked ice-cream churn. Her brilliant invention of the “Artificial Freezer” — a design still used today — streamlined the tedious process of producing ice cream by stirring the custard by hand and allowed widespread enjoyment of the frozen treat beyond the upper classes. Ice cream for all — talk about your birthplace of democracy!

4. That Time We Brought the World Breyers

When we think of Philadelphia and ice cream, we think Breyers, which is still the only ice cream we dare serve at extended family gatherings. Company founder William A. Breyer cranked his first ice cream back in 1866, just after the Civil War. He opened his first shop 14 years later, soon expanding to five in total and delivering the goods to each in a horse-drawn wagon. The family opened its first manufacturing facility in 1896. By 1918, Breyers was making more than a million gallons a year and distributing to shops throughout the Northeast. The company was bought by Unilever in 1993. We’re partial to the vanilla – the real ice cream, not the “frozen dairy dessert.”

Beloved though Breyers may be, competitor Bassetts can claim to be the oldest ice-cream company in town, since it was founded five years before Breyers got churning, in 1861. Granted, that was in Salem, New Jersey, just over the river. But! Bassetts used a mule-drawn churn! Quaker Lewis Dubois Bassett opened his first shop, at 5th and Market, in 1885 — and became a tenant in Reading Terminal Market back when it was all shiny and new, in 1893. They’re still there today, in their sixth generation of family ownership — the last remaining original tenant, now scooping 40 different flavors. Their vanilla rocks, too. Food & Wine magazine just named Bassetts the best ice cream in Pennsylvania.

6. That Time the Ice-Cream Soda Was Born at the Franklin Institute

Robert McCay Green was a Civil War veteran and is laid to rest in Laurel Hill Cemetery. But fairly or unfairly, his fame rests on his invention of the ice-cream soda in 1874, while he was a vendor at the 50th birthday celebration of the Franklin Institute — just in time for the forthcoming Centennial Exposition in Fairmount Park. Depending on the version of his legend you believe, he either ran out of cream for sweet cream sodas and subbed in ice cream or simply thought that ice cream combined with soda water would make a cool treat. (Hey, it ain’t rocket science.) Today, we have National Ice-Cream Soda Day, celebrated every June 20th, to commemorate Green’s brainstorm. 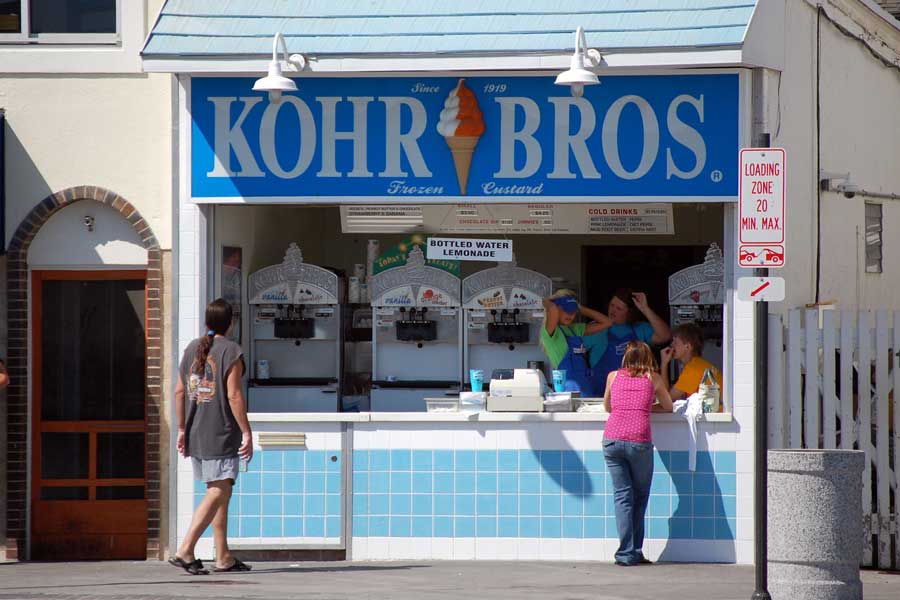 Find Kohr Bros. all up and down the Shore. Photograph by Susan Smith/Flickr

You can’t make a root beer float without root beer, so the world had to wait for this scrumptious treat until Philly pharmacist Charles E. Hires shared his ideation of an age-old beverage with the world at the 1876 Centennial Exhibition (see above). According to legend, Hires was served a homemade “root beer” while on honeymoon with his new bride at a farmhouse in New Jersey. Taken with the treat, he talked the farmwife into sharing her recipe, then experimented to improve on it, settling on a concoction of 16 native roots, barks, herbs and berries. He intended to market it as “Root Tea,” but his friend Russell Conwell (founder of Temple University) convinced him that root “beer” would prove more popular with the working classes. Hires launched the brand just as the Temperance Movement was gaining steam and drugstore soda counters were taking off. Today, the brand is owned by Dr. Pepper, and an entire online army fights to find it in stores and order it online. (You can still buy an extract and make your own!)

Ice cream seems to reward tinkerers, and that’s what York native Archie Kohr was when he bought his first gas-powered ice-cream-churning machine in 1917. He and his two brothers, Elton and Lester, were looking for ways to generate more business at the family dairy farm. They messed around with recipes as well as the machinery and wound up with a smooth, creamy “frozen custard” dessert unlike anything else they’d ever tasted. Hauling the machine to Coney Island, they set up shop and sold 18,000 cones on their first weekend, at a nickel each. Today, more than a century later, there are Kohr Bros. custard shops on every boardwalk around. 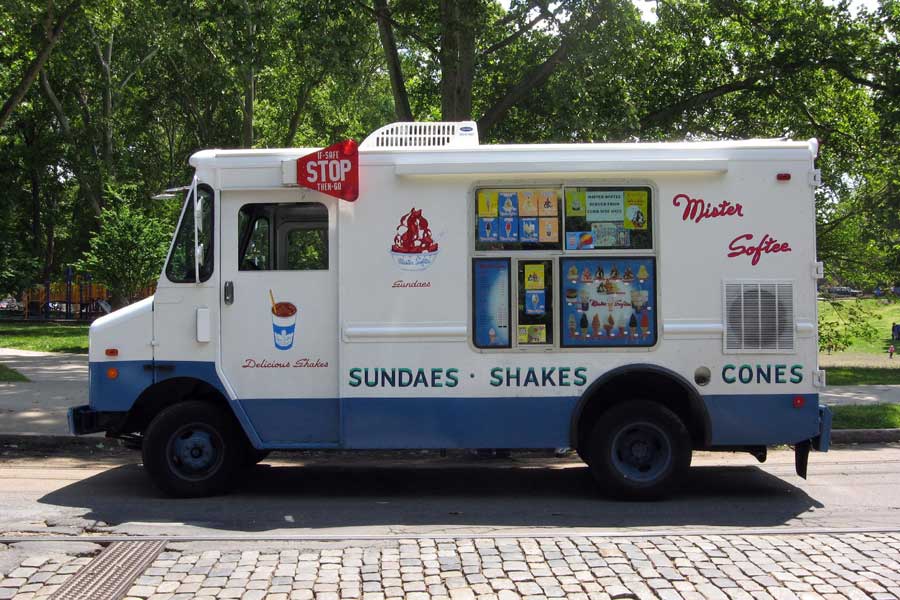 Mister Softee is a Philadelphia classic. Photograph by Ezra Wolfe/Flickr

9. That Time We Blessed the Universe With Rita’s

Today they call it “Rita’s Ice,” but we know that when retired Philly firefighter Bob Tumolo started the company with a single stand in Bensalem back in 1984, the sign said “Rita’s Water Ice.” And “water ice” it always will be for us, even though there are now more than 600 Rita’s stores across the country (most of which know the frozen emulsion as “Italian ice”). Tumolo named the business for his wife, Rita.

Today, the top three favorite flavors are mango, followed by cherry and (eww!) Swedish Fish. Rita’s sells its version of frozen custard, too, as well as a layered mix of ice and custard it calls “gelati,” which … Anyway, if you want, there are directions on the Rita’s website to download the company jingle as your ringtone. This year, for the second year in a row, COVID forced cancellation of Rita’s annual First Day of Spring free giveaway. Here’s to 2022!

10. That Time We Birthed the Choco Taco

If you never realized Jack & Jill Ice Cream Company was a local brand, a glance at the website’s location map will drive the fact home. Founder Max Schwartz started the company in 1929 — the dawn of the Great Depression — by selling ice-cream treats out of a wooden box he carried through the streets of Philly. The company, famous for its 1984 invention of the Choco Taco, bought its first truck in 1936. Also with local origins: Mister Softee, whose jingle former New York mayor Michael Bloomberg once tried to ban from the city’s streets. There’s much more about Mister Softee in the July issue of Philly Mag — make sure to give it a read.