Our 30 favorite places to eat cold, pure dairy in the Philly-area. Because ice cream isn't a seasonal food. Ice cream is, in fact, forever. 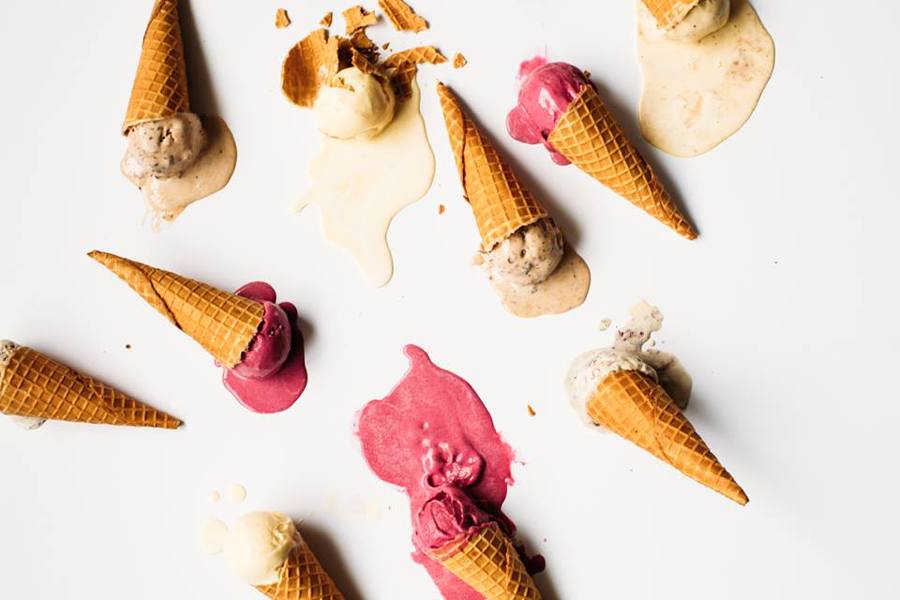 While we consider ice cream to be a year-round food, society deems it a hot-weather specialty. It’s true that nothing hits quite like a frosty double-scoop in a crisp waffle cone or a fudgy, overloaded sundae on an 80-degree day. But we think you should be visiting these Philly-area ice cream shops often and always. Keep our guide bookmarked and you’ll never have to Google “peanut butter ice cream near me” again. 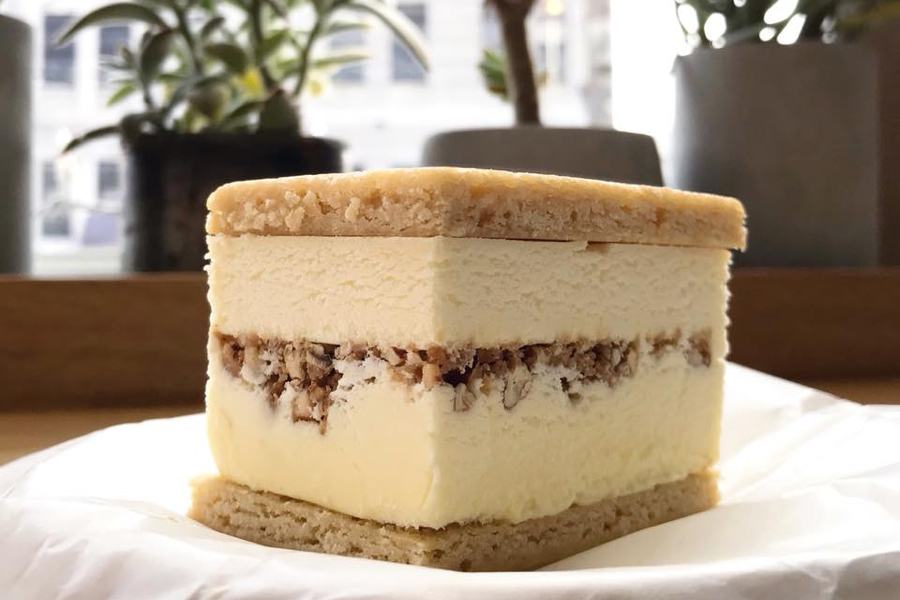 Weckerly’s, Fishtown and West Philly
Jen and Andy Satinsky’s Best of Philly-winning scoop shop — which originally opened out of Green Line Cafe in 2012, then unveiled their brick-and-mortar on Girard Avenue, and now operates on 44th Street, too — sources hyper-local ingredients for their rich, French-style custard. Be sure to get a mini ice cream sandwich to top your next scoop (served in a homemade waffle cone, naturally).

D’Emilio’s Old World Ice Treats, East Passyunk
D’Emilio’s is the spot for old-school sorbetto and a classic swirl of soft-serve ice cream coated in sprinkles and served in a cone. If you’re really going for it, you can also opt for one of their signature sundaes, which are gigantic and always changing. Check their Instagram page to see today’s sundae special.

1-900-ICE-CREAM, Ardmore, Fishtown, and Center City
Waiting for 1-900’s weekly ice cream drops is like waiting for new HBO legacy television to come out. They make all of their flavors in gelato machines in their Kensington factory — super-rich, creamy ice cream absolutely packed with add-ins like Italian rainbow cake, vanilla pudding swirl, and fudgy gingerbread cubes — then distribute the goods to 1-900’s full-time scoop shop in Ardmore and pick-up locations. Make sure to stop by the Ardmore location for soft serve (which isn’t available at the other two spots).

Milk Jawn, Pop-ups and in East Passyunk on weekends
Milk Jawn’s Philly-style, egg-free ice cream is made in small batches by Amy Wilson, Ryan Miller, and Cathryn Sanderson. Their flavors — like Earl Grey ice cream studded with honeycomb candy, lemon curd with blueberry basil swirl, and a perfectly minty stracciatella — are available every weekend at 1303 East Passyunk Avenue from noon to 4 p.m. as well as at farmers’ markets and shops around Philly. Keep track of where to find them here. 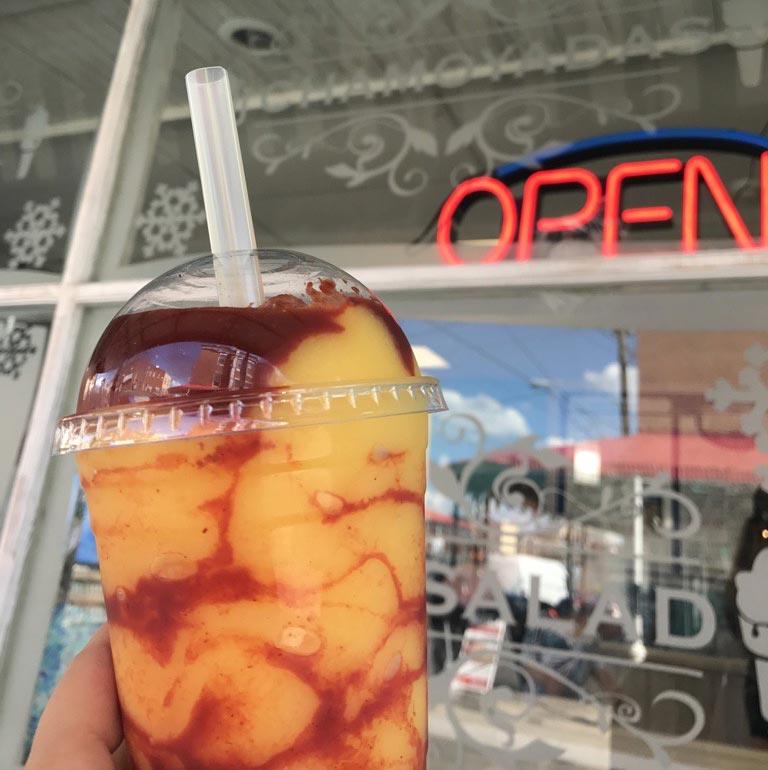 Fiore Fine Foods, Old City
One of the only silver linings of COVID was that Justine Macneil’s gelatos finally got their due. Every week, they post the menu on their website for preorder, and every weekend, droves of very smart people come from all over the city to stock their freezers with Macneil’s perfect creations. Follow along on their Instagram for a chance to vote on upcoming flavors.

Matcha Cafe Maiko, Chinatown
As the name suggests, this is the place to go for matcha-infused treats. In addition to matcha soft-serve, they have rotating flavors like ube and black sesame, and you can opt for a cone, float, or even layer the soft-serve over kakigōri for an almost-too-pretty-to-eat sundae.

The Chilly Banana, East Passyunk
Okay, so it’s not technically ice cream (since there’s no dairy to be found), but Chilly Banana’s Kevin Kramer and Courtney Harding can make a fruit-based convert out of just about anyone. Visit their recently opened brick-and-mortar location to try the iconic banana whip they’ve been slinging for seven years from their instantly recognizable pink truck.

Jeni’s, Fishtown and Rittenhouse
You can always pick up a pint of this national chain’s signature Brambleberry Crisp at the grocery store, but it just tastes better straight from the source. Luckily, Jeni’s has two Philly storefronts now — both of which stay open until midnight (though, at Fishtown, they close at 11 p.m. Sunday through Thursday).

Hope’s Country Fresh Cookies, Bryn Mawr
Ostensibly a cookie company, the real draw here is what Hope’s does with said cookies at its Bryn Mawr store: deluxe ice cream sandwiches, made with Delaware Valley-based Nelson’s and Jack & Jill ice creams, in so many combinations it may be physically impossible to try them all yourself.

Van Leeuwen, Rittenhouse and Midtown Village
If you know about Van Leeuwen, you know to expect long lines and high prices at the Brooklyn-based shop’s two Philly locations. But there’s a reason people still flock to their scoop shops, despite the fact that a pint will run you into the double digits. Their flavors (like earl grey tea and honeycomb) are clean, fresh, innovative and their vegan scoops are better than they have any right to be.

Scoop DeVille, Midtown Village, Old City, Queen Village
Whenever you’re in need of late-night ice cream, rely on Scoop DeVille. Two out of their three  locations are open until 1 a.m. on Friday and Saturday nights. Come for sundaes and scoops with whipped cream and your choice of over a hundred toppings (or blend-ins), or get your ice cream served in a cookie cup. 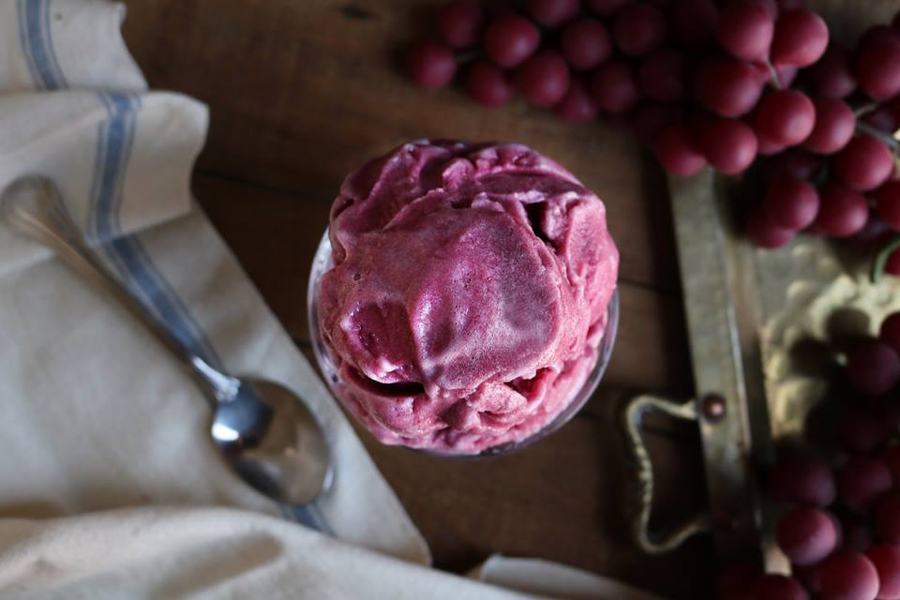 Photograph courtesy of The Franklin Fountain

Franklin Fountain, Old City
Eric and Ryan Berley’s ice cream parlor recreates a 1900’s-style vibe with old-timey uniforms, decor, and even equipment. Be sure to check out its sister shop, Franklin Ice Cream Bar, right next door, which is open until midnight on Fridays and Saturdays.

Arctic Scoop, East Passyunk and Center City
In addition to flavors like neon-green pandan, lavender taro, and pink lychee rose, Arctic Scoop gets extra points for presentation. They’ll put your selection (and so many toppings) in an actual coconut or folded into a bubble waffle, piled high with fruit, Pocky, boba, and whatever else you can dream up. Visit them at their longtime East Passyunk storefront, or in their pop-up spot in the Shops at Liberty Place.

Handel’s, Berwyn
Despite all the great city options, if you’re a true ice cream aficionado you owe it to yourself to make your way out to Berwyn for this old standby serving homemade ice cream since 1945. National Geographic named it the best ice cream on the planet in 2018, and with flavors including “Spouse Like a House” (made with vanilla ice cream and peanut butter pretzels), it’s no mystery why.

C & C Creamery, Manayunk
This seasonal spot on Ridge Avenue has been serving up frozen treats and baked sweets for several decades. Head there for house-made water ice, soft serve, shakes, and malts.

Zsa’s, Germantown
A cheery shop that boasts home-made seasonal scoops and sandwiches (like salted caramel and strawberries and cream) to cones that come in all kinds of flavors and are baked by a company in Brooklyn called The Konery.

D’Ascenzo’s Gelato, West Chester
A trip to Rome inspired owners Glen and Kristin D’Ascenzo to start making and selling gelato at Philly farmers’ markets 15 years ago. Now, they operate out of their nationally-acclaimed gelateria, working with a local dairy to source their milk, roasting ingredients like nuts in-house, and sourcing seasonal fruit to make their rotating flavors.

Crave Creamery, Springfield
This Baltimore Pike shop stocks a slate of gelato flavors — classics like coconut, pistachio, and cookies and cream — in addition hard ice cream, water ice, bubble tea, and vegan ice cream. You can get the goods by the scoop, or opt for sustainable ice cream eating with one of their returnable logo quart jars to get a buck off your refill next time.

Surreal Creamery, University City, Dresher and Bryn Mawr
Get your soft-serve in bubble-tea floats (“floateas”) or one of Surreal’s over-the-top sundaes in signature mason jars, swirled so high that they defy gravity. 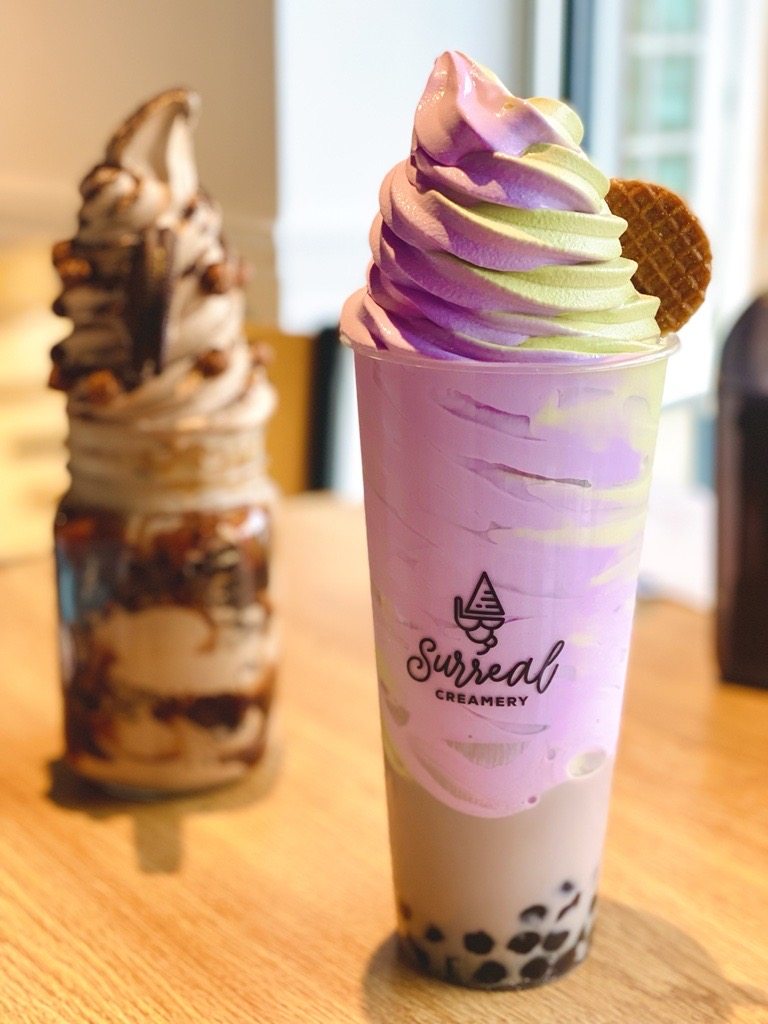 Häagen Dasz, South Street
One of the oldest ice cream shops in the city, owner Brian Calhoun’s outpost of the Bronx-based chain (yeah, bet you thought it was Dutch or something) has been scooping at 3rd and South streets for over 35 years.

Gran Caffe L’Aquila, Center City
This Chestnut Street emporium boasts espresso, a full menu, and a shop full of Italian goodies — plus some of the best gelato in the city. Stop in for a scoop or go all out and book your own gelato tasting with optional wine pairing. Pro tip: If you’d prefer to pair your gelato with al taglio pizza, they also serve Gran Caffee L’Aquila’s gelato at Alice on 15th and Locust streets, where you can even get it affogato-style thanks to their on-site coffee bar. 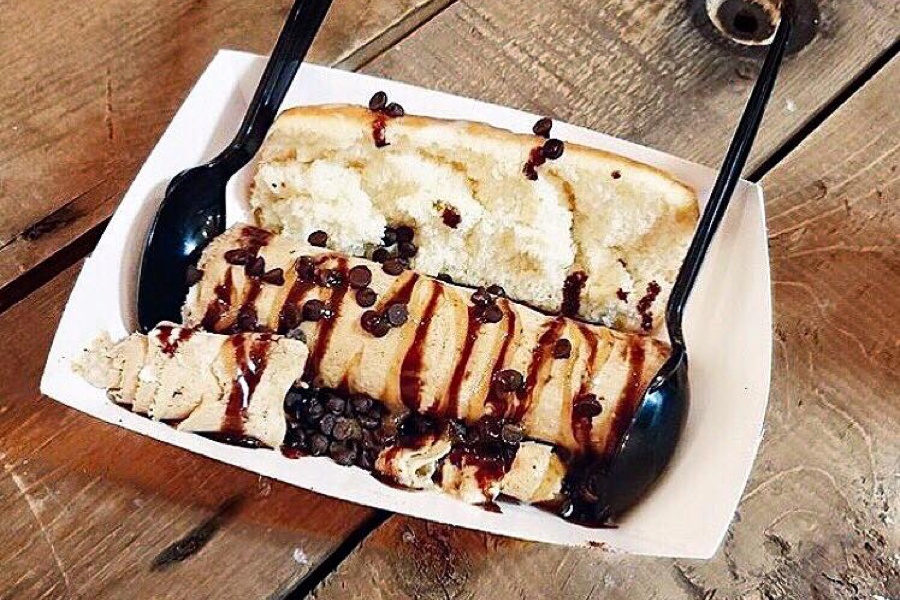 Sweet Charlie’s, Rittenhouse and Center City
The last time we wrote about Sweet Charlie’s — the shop that brought rolled ice cream to Philly — they were far from today’s national chain status. But if you couldn’t already tell by the Tall Charlie — essentially a cheesesteak in ice cream form, where the steak is ice cream, and the Amoroso roll is a glazed donut bun— we still get to claim them as our local success story.

Koffmeyer’s , Havertown
This longtime Society Hill cookie bakery moved to the suburbs in 2011 and added Pennsylvania-made Leiby’s ice cream to its offerings at the same time, somehow making an already-perfect menu even better.

Bassetts, Market East
The OG of Philadelpia-style (egg-free) ice cream — and the oldest ice cream brand in the country — still serves up shakes, cups, and cones from its longtime stall in Reading Terminal Market.