A new book looks at the effervescent Philadelphian who made root beer as American as apple pie. 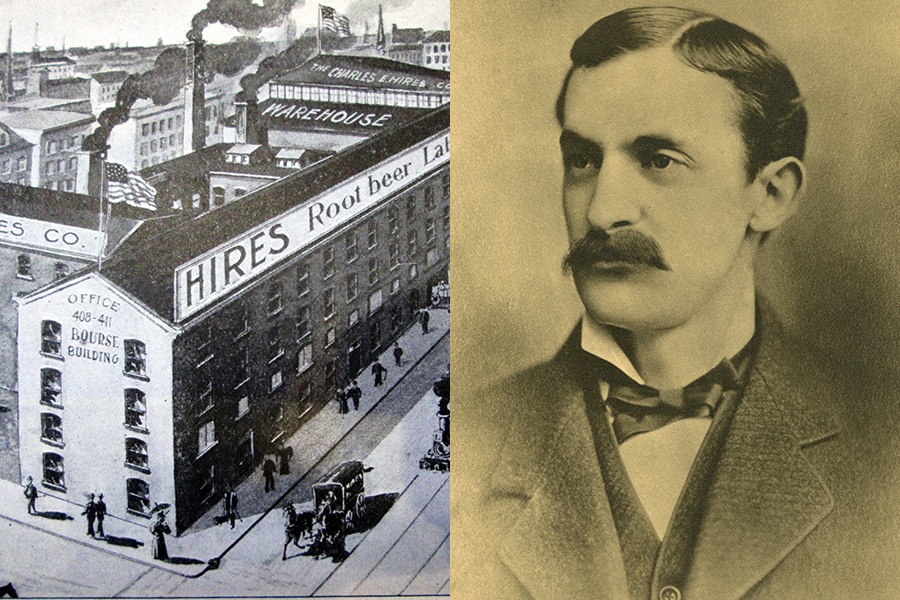 Okay, sure, there’s Coca Cola — but 10 years before there was, Philadelphia druggist Charles E. Hires introduced his all-natural Hires Root Beer to the world and launched the soft-drink biz. From a new book, Charles E. Hires and the Drink That Wowed a Nation, by Bill Double (Temple University Press), here’s a rundown on his remarkable entrepreneurial life.

1. Charles Elmer Hires, born in 1851 on a farm in Salem County, New Jersey, by age six or seven was already collecting old bottles, cleaning them, filling them with colored liquids he made from various plants, and displaying them in a play drugstore he made himself. Naturally, his parents apprenticed him at age 12 to his brothers-in-law, two pharmacists who had married Charles’s older sisters.

2. After he eventually bought a one-third share in the store, Charles concocted his first successful herbal remedy: “Hires’ Dyspepsia Mixture,” a blend of roots and barks that his advertisements said would cure stomach pain, constipation, lack of appetite, depression, dizziness, heart palpitations, vomiting, headaches, staggering and dim vision, among other ills.

3. Hires soon opened his own Philly drugstore, at 602 Spruce Street, just off Washington Square. On a midday walk, he noticed a pile of dirt outside a nearby cellar that was being excavated. He took a sample and examined it with a microscope back at his store, confirming that it was fuller’s earth, a valuable clay used to remove stains from wool and flannel. He bought the clay, packed it into rings, packaged it up, and sold it as “Hires’ Special Cleaner,” making a killing.

4. On his honeymoon with new bride Clara Kate Smith in 1875, Hires stayed at a farm near Morristown, New Jersey. The pair were served a cool, sparkling concoction brewed from native roots, herbs, barks and berries that the farmwife called “homemade root beer.” Hires cajoled the woman into sharing her recipe with him, then spent a year experimenting with it before settling on a product he claimed contained 16 different roots, barks, herbs and berries. (The exact recipe is a trade secret.)

5. The working name for his concoction was “Hires’ Root Tea”; at the time, the temperance movement was popular, and Hires was deeply religious and committed to the temperance cause. But Temple University founder Russell Conwell, his friend and business adviser, suggested “Root Beer” instead, insisting, “Our hard-drinking miners in central Pennsylvania will never touch a drink labeled ‘tea.’”

6. After test-marketing his root beer concentrate for a year out of his drugstore, Hires felt confident enough to introduce it at the 1876 Centennial Exhibition, offering free samples of the powder, demonstrating how to prepare it, and selling glasses of root beer for three cents apiece. He was lucky enough to do so just as drugstore “soda fountains” were becoming enormously popular. 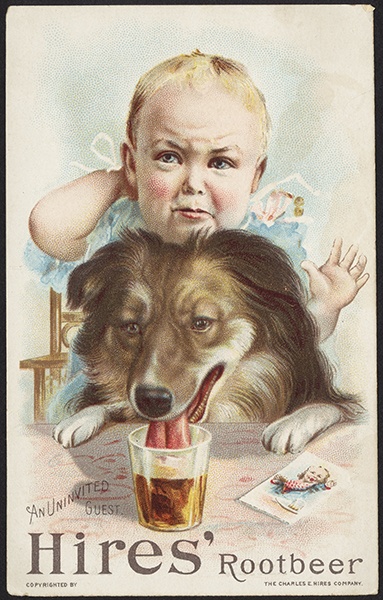 From the collection of the Boston Public Library.

7. Hires was also an indefatigable advertiser, promoting his root beer in magazines and newspapers as well as on collectible cards as “the greatest health-giving beverage in the whole world” and “a temperance drink of the highest medicinal value.” He constantly battled imitators; the Philadelphia Times wrote in the 1890s, “It is doubtful if any modern commodity, excepting money, has been counterfeited more than Hires Root Beer.” The Philadelphia Court of Common Pleas eventually levied a $1,000 fine against a competing soda fountain operator for selling phony Hires, somewhat squelching other counterfeiters.

9. While the “Root Beer” over “Root Tea” decision helped sales, it had near-disastrous consequences when a freelance chemist analyzed the fizzy stuff and announced it contained a “high percentage” of alcohol. Hires, outraged, commissioned a chemical analysis by a Penn chemistry prof, who found the beverage contained only a “trace” of alcohol. Still, in 1895 the Women’s Christian Temperance Union declared root beer an alcoholic drink and called for a nationwide boycott of Hires. This led the New York Times to run an editorial headlined, “Is Root Beer ‘Insidious’?” Hires mounted a vast advertising blitz, and in 1896, the WCTU called off its boycott.

10. Between 1904 and 1909, Hires revenues rose by an average of 29 percent annually, with soda fountains serving up 65 million glasses of Hires Root Beer at a nickel each. Clara Kate died in 1910; Hires remarried the following year to a family friend, Emma Waln, a teacher at Friends’ Central School. He died suddenly in July 1937 at age 85 while preparing for a summer visit to the Shore and was eulogized in the local and national press as “the Root Beer King.” Today, the Hires brand is owned by Dr Pepper Snapple, which also markets the A and W, Stewarts and IBC root beer brands.