Just when we thought we'd never hear about one of Philly's most notorious restaurateurs ever, ever again... 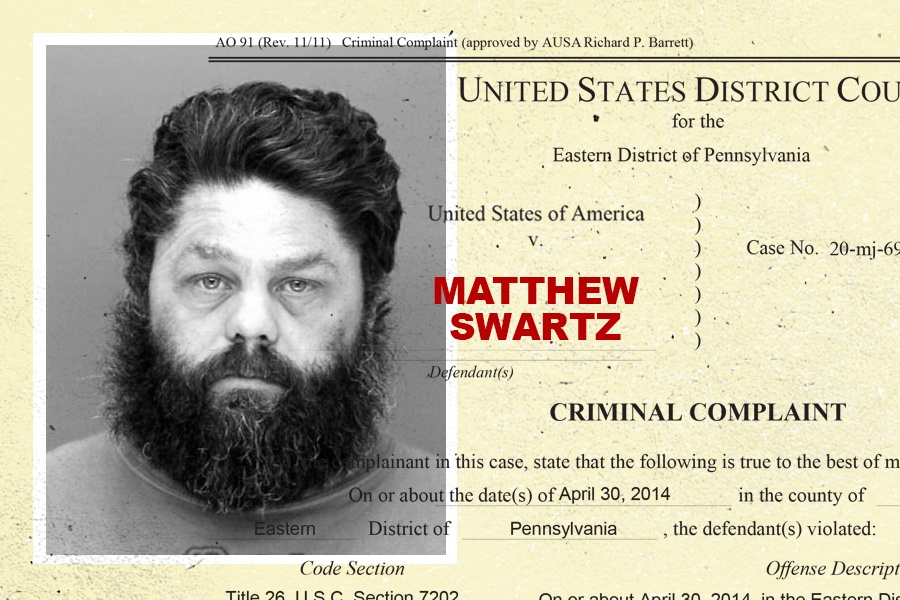 Inset: An old mugshot of Matt Swartz. Background: The complaint filed against Matt Swartz for allegedly failing to turn over hundreds of thousands of dollars to the IRS.

You know how when you look at a pay stub, you see all the taxes that your employer has withheld from your paycheck? And then, the idea is that your employer, in turn, pays that money to the IRS on your behalf? At least, that’s the way that things are supposed to work. But then there is former Farmer’s Cabinet owner Matt Swartz, who didn’t do it that way at all, according to allegations by the Department of Justice.

On Thursday morning, the feds filed a complaint against Swartz, who had quite the run as one of Philly’s most notorious restaurateurs, accusing him of withholding tax money from the paychecks of employees at the Farmer’s Cabinet but then failing to turn that money over to the IRS.

In all, prosecutors say that Swartz “willfully failed to truthfully account for and pay” the IRS more than $484,000 in money that he withheld from employees between 2011 and 2014, the year the landlord evicted the Farmer’s Cabinet from its Walnut Street address.

The feds go on to claim that Swartz didn’t turn over any of the taxes that were withheld from employee checks for the entire life of the business.

This isn’t the first time that Swartz had a problem with the law. He did a stint for wire fraud back in 2008 for a scheme involving his fake “financial services” company.

But that was before he landed in Philly and gave us oh so much to write about.

There was the state police raid on the Farmer’s Cabinet that led to forgery and conspiracy charges against Swartz, among other offenses. He pleaded guilty to one count of tampering with a public record and two counts of serving beer without a license to do so, and a judge sentenced him to 12 months of probation.

Speaking of probation, then there was the time that we discovered that Swartz’s probation officer in that case turned out to also be an employee at one of his other restaurants. And that’s a no-no.

We could go on.

If convicted, Swartz could face a penalty of up to five years in prison and a fine of as much as $250,000 — plus, he’d have to pay for the costs of his own prosecution.

Swartz, who is not currently in custody, could not be reached for comment, and there’s no attorney of record listed in the case at this time.