From upscale cheesesteaks to brontosaurus BBQ short ribs, here's where to order the cheffiest Super Bowl snacks in Philly, to go. 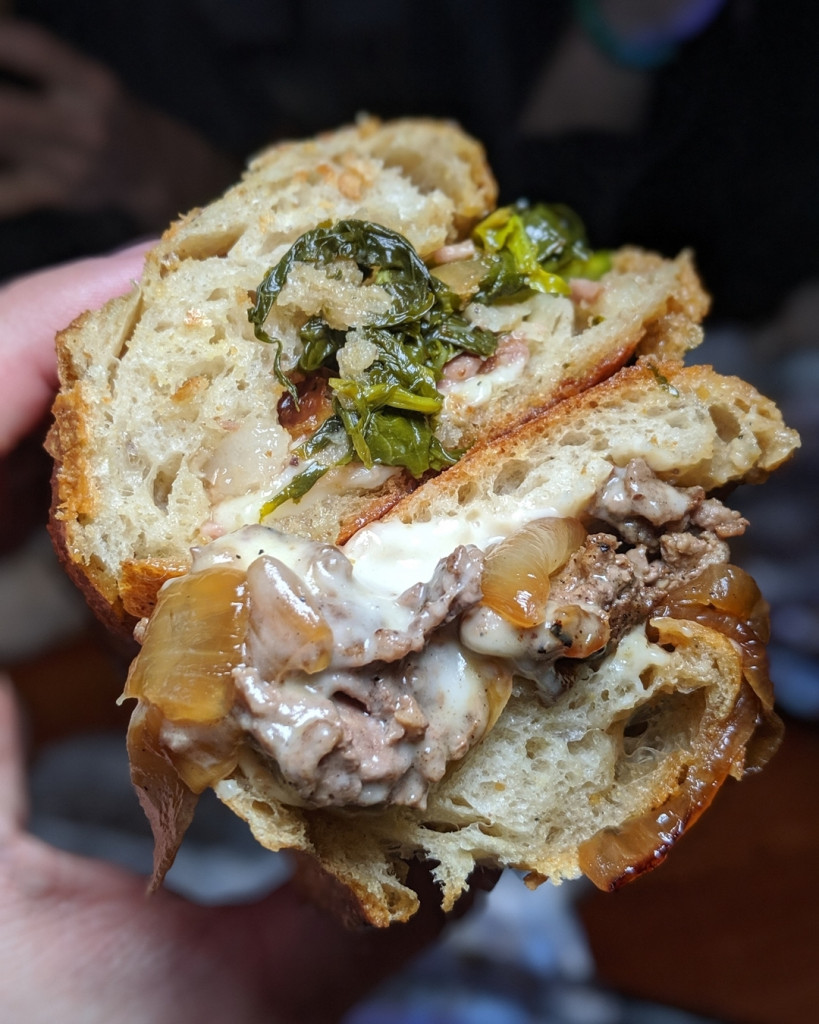 Here at Foobooz, we’re not big football fans. We actually weren’t sure when the Super Bowl was until this morning, but don’t count that against us, because we are extremely devoted fans of eating-centric events. The Super Bowl, of course, is a very eating-centric event, an opportunity to celebrate the world’s (or at least Philly’s) best, most indulgent snack foods. Nachos, dips, sandwiches, pizza — it’s got all the food intensity of Thanksgiving, minus the stressful family dynamics and any expectation of tradition. Whether you’re hosting a watch party, attending one, or are more interested in the halftime show, here are our picks for what to eat for the big game.

Because this is Philly, we will obviously start with cheesesteaks. At Musi, chef Ari Miller is doing his monthly Frizwit pop-up on Sunday, February 2nd, rather than on Monday (when he normally does these). He serves only two things: a very gooey cheesesteak made with  Primal Supply chip steak, fresh rolls, and a sharp cheddar cheese sauce, and a vegetarian version with “frizzled” mushrooms. You can preorder them here, for pickup between 1 p.m. and 4 p.m. at Musi. Beer will also be available to go from Workhorse Brewing Company.

A post shared by Liberty Kitchen Philadelphia (@libertykitchenphl) on Jan 28, 2020 at 8:35am PST

At Liberty Kitchen, they know we’re all still basking in the glow of the Eagles’ 2018 win, which is why their Super Bowl hoagie is called the Mortadelphia. It’s got imported mortadella, sharp provolone, artichoke spread, roasted red peppers and arugula, and you can add it to a hoagie-tray order (check the catering menu) until Saturday at 7 p.m., so get your order in or starve.

For an extreme power move, order Porcos Porchetteria’s Pork and Pastry Party Platter, which includes a tray of sliced porchetta plus fixings for 12 sandwiches and a baker’s dozen of pastries for $225. Call the shop to reserve.

If a regular hoagie seems inappropriate for the moment, what about a three-foot hoagie from Middle Child? What’s more fun than a regular thing, just bigger? They’ll let you pick two versions of their regular hoagies to pack into the sandwich, and you can order sides of pickles and onion dip to accompany. Order here by 1 p.m. on Friday, January 31st.

I have never been to a party where the guacamole lasted the duration of the game. I’m not actually convinced that it’s possible to have enough guacamole. But Cafe Ynez is making a strong attempt by offering 80 ounce portions of guacamole for this Sunday’s game. To be clear, that’s five pounds of guacamole (plus house-made tortilla chips) for $80. Consider using it for a little weightlifting before serving it to your friends, who will probably be very, very happy. They’re also offering a special 10-person tray of crab nachos, with lump crabmeat, cheese, black beans, guajillo salsa and crema ($140). Call the restaurant to order before Thursday, January 30th.

There are also the brontosaurus short ribs from Mike’s BBQ. This is a show-stopper — $75 for a slab of beef ribs, which will feed several hungry people. Mike’s is also accepting orders for other meat available for pick up and delivery. Call for details.