A Return to Roots: Forsythia Reviewed

Chris Kearse closed his groundbreaking restaurant, Will BYOB. Forsythia is his second act. 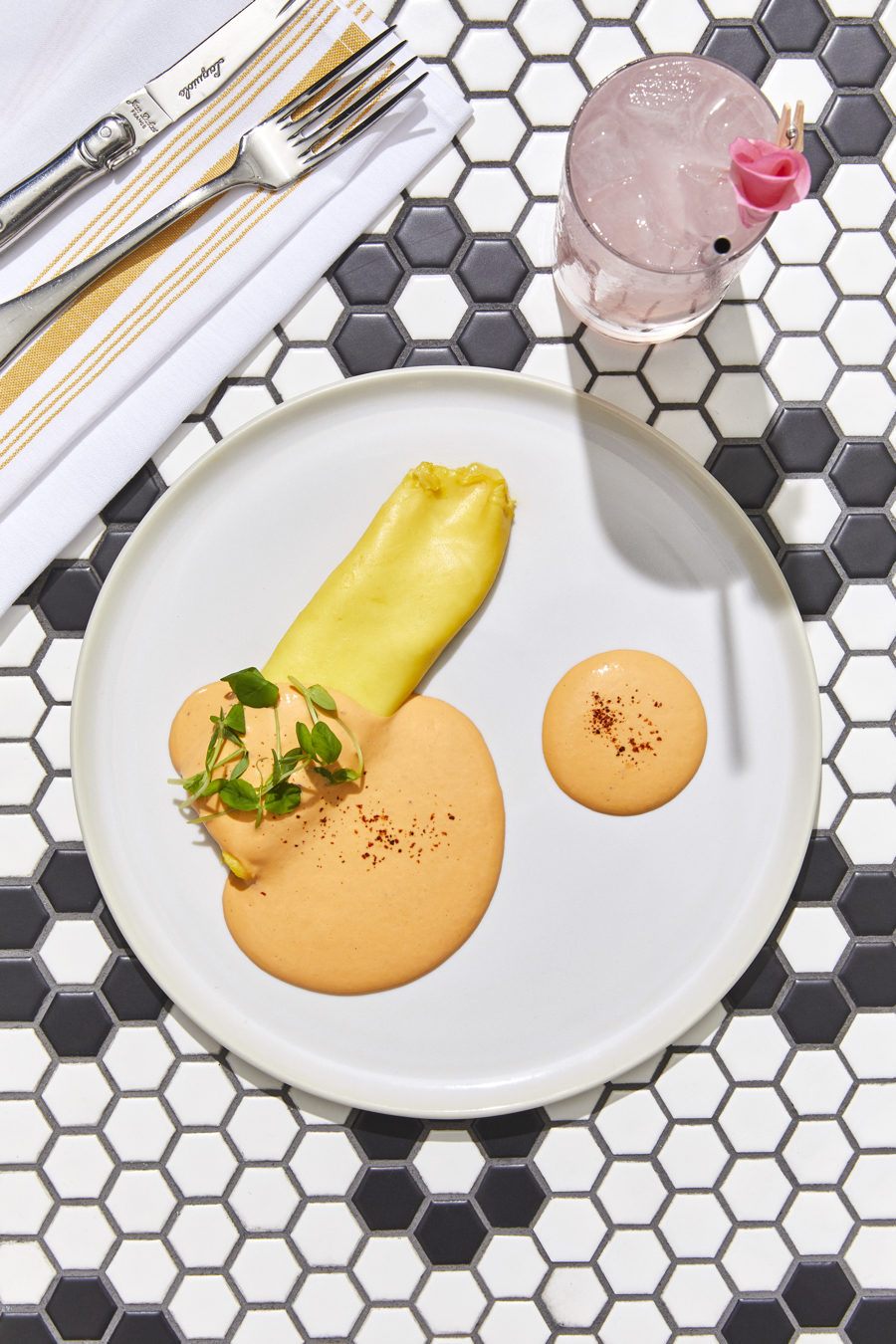 A French omelet is one of the world’s most perfect foods: comforting, simple, yet requiring a rigorous technique to do properly. Everyone who eats seriously has probably had a few bad ones. But one done right can turn your whole night around.

The one in front of me is Crayola yellow, carefully rolled, stuffed with tender chunks of Jonah crab and topped with a stripe of smooth, warm sauce Choron (a béarnaise spiked with tomato). It’s ideal. It’s everything French food is supposed to be, minus the stuffiness and rampant cultural appropriation. And it turns my night around because to be honest, I hadn’t really been looking forward to dinner at Chris Kearse’s new restaurant, Forsythia.

Order This: The omelet. Beignets, for sure. Some mussels to share, and anything off the list of entrées.

It wasn’t that I didn’t think Kearse was a good chef. Actually, I think he’s a brilliant chef, with the kind of résumé any white-jacket would murder for: WD-50, Restaurant Gordon Ramsey, St. John, the French Laundry under Keller, Tru, Alinea with Grant Achatz, Lacroix here in Philly, then Pumpkin, then his own thing, Will BYOB, where he did modernist cuisine at a time when it was all the rage. Tweezers and meat glue, that was Kearse’s thing. Sculptural plates, with a fascinating static between flavor and texture, even more between technique and tradition.

Kearse knows his stuff, no doubt. More than that, I’ve seen him cruising the farmers’ markets myself on more than one occasion — poking the melons and talking with suppliers. He’s an on-the-ground kind of chef. The sort who stands his post on the line every night, who is the face, the heart and the hands of his operation. 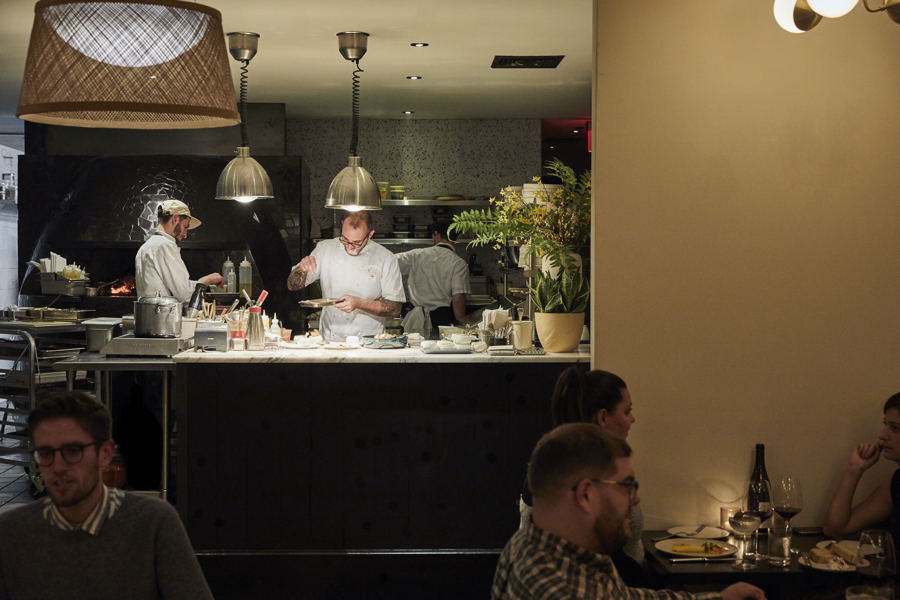 Chris Kearse behind the pass at Forsythia | Photo by Michael Persico

But the American appetite for modernism faded. What was once cutting-edge began to feel somewhat … clinical. And while Kearse tried to adapt at Will, softening the experimental edges of the menu, altering Sunday-night prix-fixe dinners to lean more toward comfort than material engineering — it was never quite enough.

Will closed. Kearse went into Forsythia with a new direction that was, ostensibly, a continuation of Will’s trajectory toward approachability. But the direction he chose was classical French. And while I love the cuisine as much as any food writer is legally obligated to (kidding), what I was saying in my head was: Seriously? Classic French in 2019, while the rest of America is eating cauliflower tacos and watching the world burn?

It felt dated. It felt like culinary backsliding. It felt weird, particularly coming from a chef as tuned-in as Kearse. It felt, more than anything else, exhausting.

Then I sat down. Then I had that omelet. And I remembered. 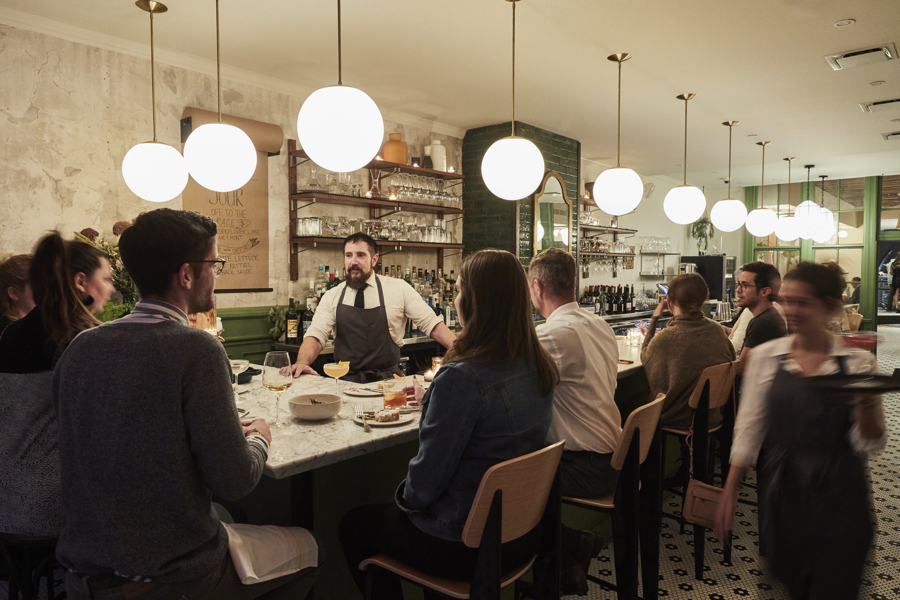 The bar at Forsythia | Photo by Michael Persico

A truly talented chef, fully in command of his skills, is more like a carpenter than a painter. A carpenter can make you a chair, a bookcase, a shelf on which to display the skulls of your vanquished foes. A painter can only paint paintings. Like a carpenter, a good chef can make noodles or pie, pho or béarnaise. A good chef can downshift from xanthan gum and sous-vide to a wood-fired oven (which Kearse has at Forsythia) and eggs, beaten and folded.

Kearse was already doing this at Will, toward the end. The menu at Forsythia has items on it (a whole hen-of-the-woods mushroom; Barnegat Light scallops) that appeared on Will’s final menus. And the style, certainly, is more reminiscent of latter days than former.

Here, now, Kearse is serving escargot and trout rillette alongside small corn and ham hock beignets, bite-size, with a tiny pot of honey mustard on the side. He’s doing clams with leeks and andouille, and spare white bowls with shingled slices of beef carpaccio laid down next to broccoli dressed with malt vinegar. 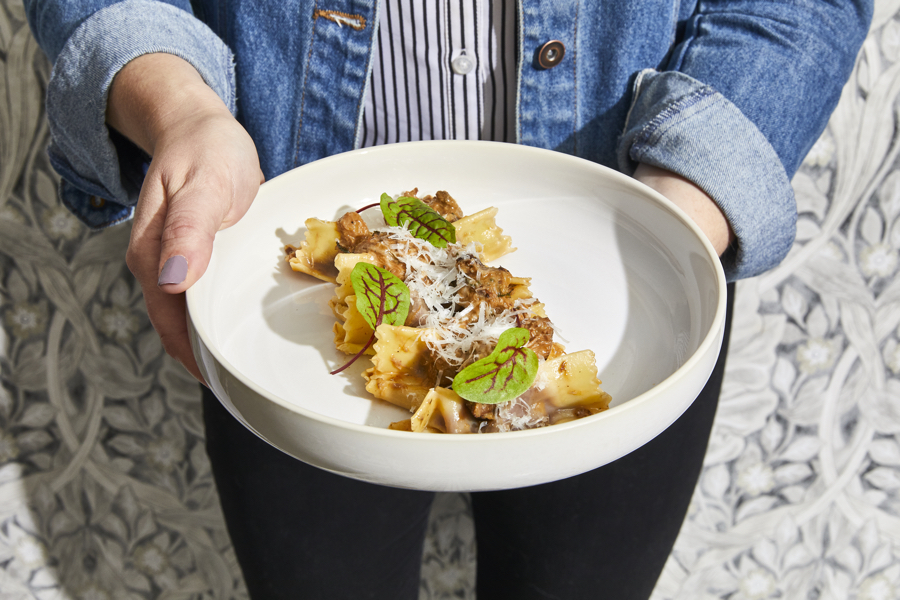 The lamb neck agnolotti would kick unholy ass at any Italian restaurant in town — the pasta stiff on the teeth, the purple potato filling a sweet counterpoint to the thin, savory gravy. And the duck? The duck … a dish so full of land mines that it has ruined entire restaurants, has tempted other chefs into spirals of self-indulgent nonsense. But here, it’s sliced thick across the breast; cooked mid-rare; served with candied cashews, the lacy flesh of black trumpet mushrooms, and sweet/sour Bing cherries; and then left (thankfully, blessedly) alone. Like the omelet, it’s a dish that is a celebration of the quiet competence that vaults ingredients and technique over ego and fireworks.

I wasn’t expecting to like Forsythia. What seemed to me an unusual about-face on the surface — a retreat to a style of dining that’s even less in vogue now than tweezers and foams — ended up being about something much simpler, much deeper. It was a return to roots. To basics. In the end, Forsythia was exactly as traditional and comforting as I didn’t think Chris Kearse had it in him to be.

And what a way to prove me wrong.