The strange tale — and we do mean tale — of self-proclaimed “celebrity chef” Michael DePasquale, who also says he was a United States Marine. 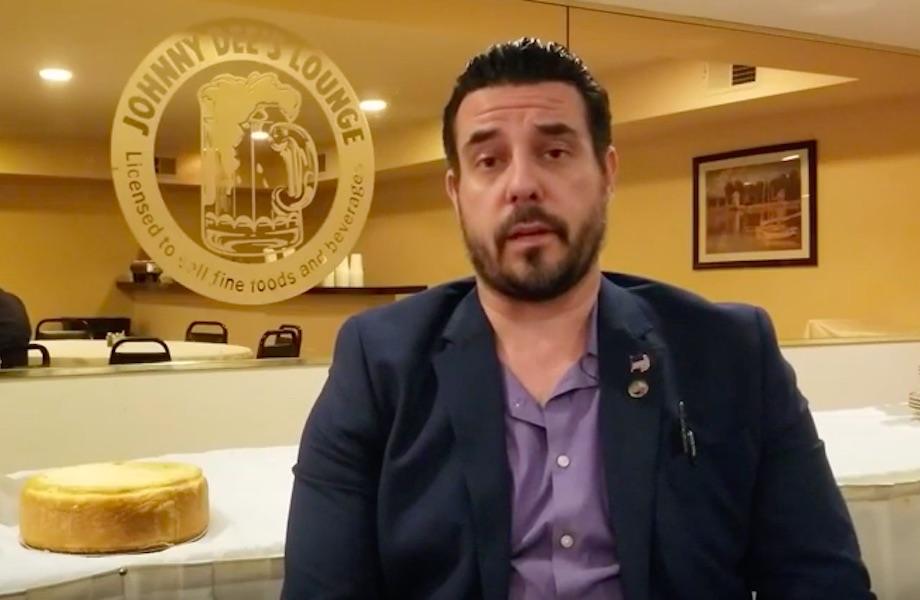 Michael DePasquale (and one of his cheesecakes) in a screenshot from a YouTube interview.

Yesterday started out simply enough, with me interviewing South Philadelphia’s Michael DePasquale about his upcoming restaurant project at 1506 South Street. But by the end of the day, DePasquale had accused me of “stalking” and “harassing” him, and he was threatening to sue me. A lot can happen in eight hours.

The whole mess actually began playing out on Monday, when the South Philly Review ran a curious article about DePasquale.

The story described the late chef Anthony Bourdain as being DePasquale’s “beloved friend” and “business partner” in the South Street restaurant, Broadway New York Cheesecake Company, which is purportedly to be a pilot location for a chain serving Jewish deli classics and cheesecake. 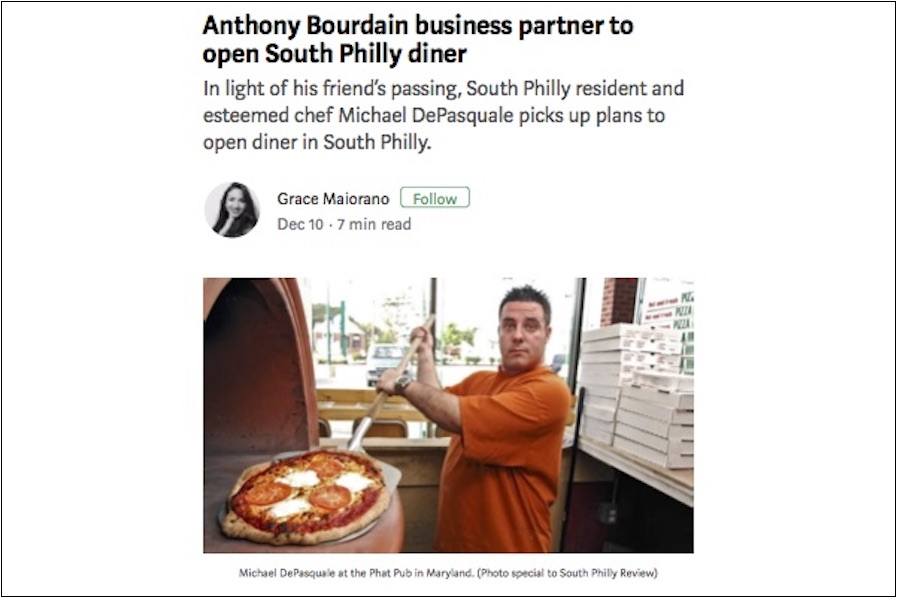 A screenshot from the South Philly Review article about Michael DePasquale and Anthony Bourdain.

Bourdain and DePasquale “discussed visions for the diner” together, reads the article, and DePasquale is quoted as saying that it was Bourdain who insisted that Broadway New York Cheesecake Company have a location in South Philadelphia, where DePasquale lives.

The article also described the 43-year-old DePasquale as an appointed United States Culinary Ambassador, part of a State Department program that originated in 2012, when then-Secretary of State Hillary Clinton made the first such appointment.

Oh, and DePasquale recently “nursed a Vietnam veteran back to health who was suffering from kidney and congestive heart failure using herbs recommended by Bourdain,” according to the South Philly Review story.

Pretty impressive. And yet, I had never heard the name Michael DePasquale until I read it in the South Philly publication on Tuesday morning.

I asked Philly Mag’s food editor, who is always in the know about such things, and this South Philly man who claims to have been a business partner and close friend of the most famous chef in the world — the only Philadelphia person we’ve ever heard make such a claim — was totally off his radar.

Meanwhile, on some of the South Philly Facebook groups, where the article had been shared, people were wondering the same thing we were: Just who the hell is this Michael DePasquale?

In interviews I found on YouTube — one of which was deleted on Tuesday night; another appears above — DePasquale made some interesting claims. Among them:

• He described himself as a “celebrity chef” and “world-famed pizza chef.”

• He said that he “cooked for several presidents” and that he was scheduled to cook for Vladimir Putin shortly after one of the videos was recorded.

• He said that he was conducting a private investigation into Bourdain’s untimely death (the South Philly Review article indicated that DePasquale was “using resources from the Federal Bureau of Investigation and the presidential cabinet” for that inquiry).

• He spoke about being a United States Marine who did “three tours in Afghanistan, Iraq and Fallujah.”

Naturally, I simply had to get DePasquale on the phone, and I did on Tuesday at 3 p.m.

I asked DePasquale who the “several presidents” were that he cooked for. He told me he cooked a private dinner for the “Obama family” (shrimp stir fry) and a meal for the “Russian president” (flounder stuffed with crabmeat — plus some meatballs and cheesecake), and that he’s also cooked for “the Afghan ambassador and the president of Nigeria.”

“He texts me a lot,” said DePasquale of Nigeria’s Muhammadu Buhari, who himself is at the center of a pretty wild story these days.

Regarding his stated position as United States Culinary Ambassador, DePasquale told me that he was appointed by Donald Trump himself.

“I’ve cooked for Trump many a time over the years,” indicated DePasquale.

I questioned him about his private investigation into Bourdain’s death in France and whether he’s really utilizing the FBI and the Trump cabinet for said investigation, as the South Philly Review reported.

“I can say that I’ve reached out to certain people,” he told me, opting not to provide further details. “They are looking into it. There’s more to the story in France. I got things out there. I’m waiting to hear back. A lot of things don’t add up, like the way he was found and how long it took him to be shipped back.”

Then I asked DePasquale to tell me a little more about his business partnership with Bourdain. After all, this is the one guy in Philly who Bourdain chose to partner with — and on a chain restaurant slinging cheesecakes, no less. I asked him whether this was a formal business deal or more that Bourdain was just giving him some friendly advice.

“He was more like a collaborator or a friend,” DePasquale told me, but later clarified that he was “going to give [Bourdain] a percentage of the business, between 30 and 40 percent.”

And for the miracle cure that DePasquale provided to that Vietnam vet:

“It’s a disabled vet who had lung and heart failure and kidney failure,” DePasquale said to me on Tuesday afternoon. “He was going to be put on dialysis on a Monday, but then Bourdain got me in touch with an herbalist. I gave him some herbs and I cooked him cabbage and potatoes and greens, and in four or five days, he was able to walk again. Soon, he was walking and talking like a champion.”

Alas, DePasquale didn’t want to put me in touch with the cured patient, but he added that the man had “landed four space shuttles.”

And speaking of vets, I wanted to learn more about DePasquale’s service to our country — especially since there were no publicly known U.S. military deployments in Iraq or Afghanistan between 1994 and 1997, the years that DePasquale told us he served as a Marine.

“I don’t wanna talk about my military stuff,” DePasquale said when I asked him about his career in the armed forces. “But let me just say that Afghanistan and Iraq are some of the most dangerous places around. I was also in Kosovo and Albania. I’m glad I did what I could. I’m glad I was able to help people.”

Well, Anthony Bourdain conveniently isn’t around for me to ask about any relationship he might have had with DePasquale. And the White House has yet to get back to me about DePasquale’s assertion that he was appointed United States Culinary Ambassador by Trump.

But I’ll tell you who did get back to me: the United States Marine Corps. On Tuesday, I contacted the press office for the USMC, and they provided me with an official statement stating that they had no record of DePasquale ever serving in the Marines.

I called DePasquale back on Tuesday evening to ask him about what the Marines had told me. I wasn’t sure what he’d say, what explanation or excuse he’d offer. But he didn’t offer any. He was shocked that I contacted the Marines.

“I’m not going to talk to you about this,” he said, refusing to comment further.

According to a background check I ran on DePasquale, he’s lived in Maryland and Philadelphia, with his earliest known address in Philadelphia dating back to 2002. And he has been involved in restaurants over the years, mostly in the Baltimore area.

As the South Philly Review story noted, his pizzas — the ones he has claimed to be “world-famed” for — did get some press in the Baltimore Sun back in 2007, when a food writer briefly noted the opening of his Neopolitan pizza restaurant there. We’re talking about less than 200 words.

Less than three months later, that same food writer wrote about “all sorts of problems” at that restaurant, including a disconnected phone.

Those two tiny items are the only mentions we could find of the “celebrity chef” in any real news outlet.

According to the background check, DePasquale has had some brushes with the law, including allegations of writing “worthless checks” that appear to have eventually been dismissed. Court records in Maryland from 2016 indicate that DePasquale was charged with being a fugitive, and there was an extradition hearing, but it is unclear from the court records we found exactly what happened in that case. And I can’t ask DePasquale, because he’s stopped talking.

“I do not like being harassed on the phone and bothered,” he wrote to me on Tuesday night. “I will contact my attorney. Your [sic] stalking and harrasing [sic] me it seems. Jealously is a terrible thing and whoever put you up to this it’s terrible. I spoke with you earlier today and was clear with you on many issues and you turned around and put them out of context.”

He also accused me of giving his phone number out to people, which I didn’t do, and I told him as much.

“Yes you did,” he wrote. “I’m not going to tolerate any of this at all I will file a suit and I’m calling your supervisor tomorrow. I do not appreciate any of this and what the person said to me on the phone.”

As for that South Philly Review article? Well, that’s been deleted. (We’ve preserved it here.) And on Wednesday morning, the parent company of the paper issued the following statement:

Allegations from a source close to Bourdain discredited information in the piece. South Philly Review parent company Newspaper Media Group aims for high journalistic standards and is looking into the matter. If warranted, a full retraction will be issued and printed in next week’s edition.