Breakfast in Philly: The Ultimate Guide

Pancakes, waffles, corned beef hash — here's where to find all the best breakfast foods, no matter where you are. 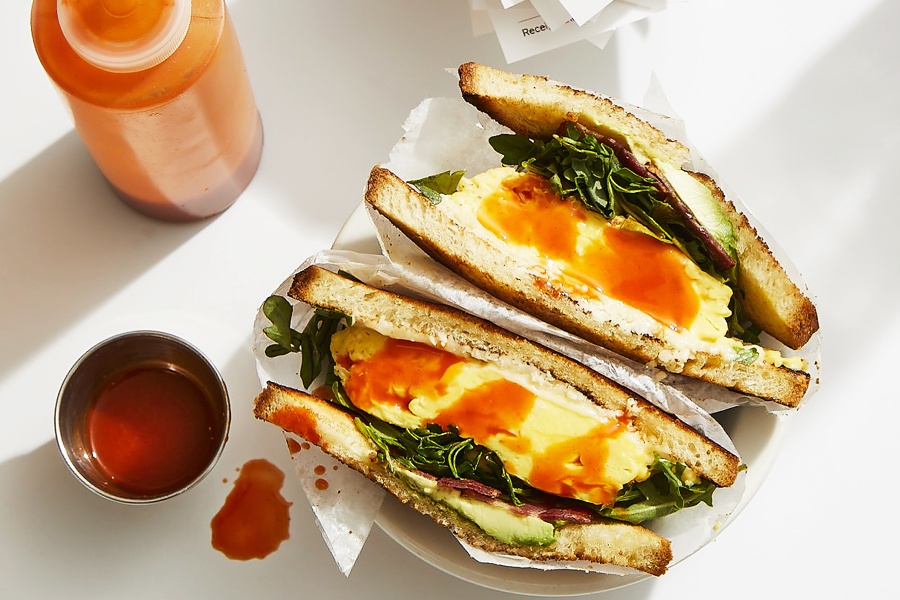 Breakfast is the most important meal of the day. That’s what your mom always told you, and she was absolutely right.

In Philly, we take this to heart. Neighborhood breakfast joints have always been an important part of the fabric that holds things together here — just as important as the street corner bar or the closest Wawa. And now, with every mini Restaurant Row sprouting all-day cafes and modern luncheonettes, the pancakes-and-egg-sandwich scene in Philly is only becoming more crowded.

All of which is good. Because screw brunch, right? It’s is for dilettantes and newlyweds. You want to get to know your neighbors and your neighborhood, you meet them over a 7 a.m. Tuesday breakfast of black coffee, eggs and scrapple at a chrome-and-formica diner where the cooks have been banging out the platters for thirty years, non-stop.

Brunch is for strangers. Breakfast is for friends. And here’s where to find all the best joints, no matter where morning finds you. 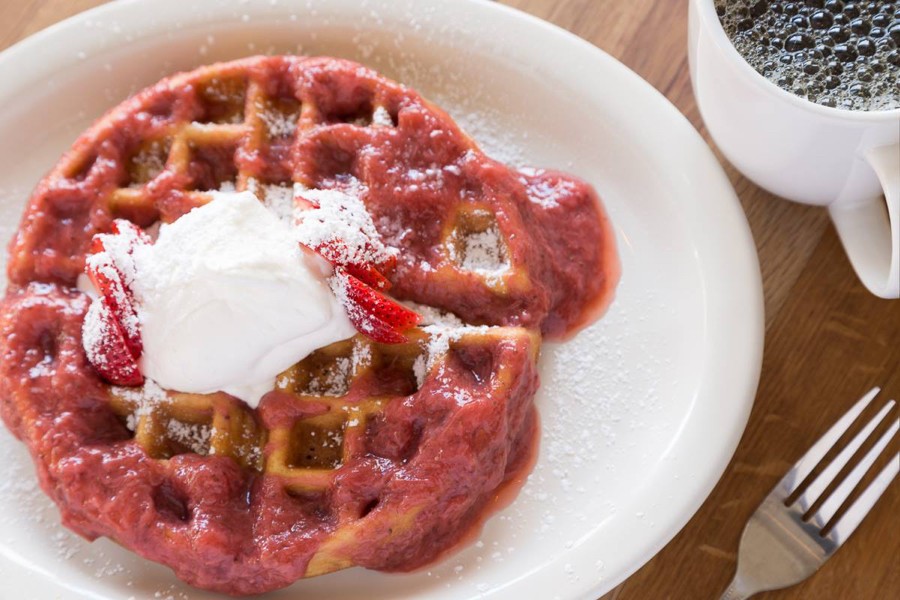 The Breakfasts You Must Try First

High Street on Market, Old City
You already know how good the bread and baked goods are at High Street. And at breakfast, they form the base of a menu that also includes new-school classics like Old Bay fried potatoes, avocado toast with fresh ricotta and an egg sandwich called The Forager with king oyster mushrooms, kale and black trumpet mayo. 308 Market Street

The Dutch, Pennsport
You care about breakfast? Then come to this breakfast specialist where Pennsylvania Dutch- and European Dutch-inspired breakfasts are all they do. Partners Lee Styer (Fond) and Joncarl Lachman (Noord) do a menu that’s a little bit local, a little bit global and completely awesome. The Dutch baby and the uitsmijter platter (with eggs, cheese, rye bread, salad, pickles and Canadian bacon) are the stand-outs. 1527 South 4th Street

Honey’s Sit ‘n Eat, Graduate Hospital, Northern Liberties
Owners Jeb Woody and Ellen Mogell opened the original Honey’s in NoLibs just so they didn’t have to go all the way to South Philly for huevos rancheros and pancakes on the weekends. Now, years later, there are two locations and both of them do some of the best Southern-fried, down-home breakfasts anywhere in the city. 2101 South Street, 800 North 4th Street

Federal Donuts, Everywhere
I can’t believe that no one thought of doing a combo fried-chicken-and-donut-shop in Philly before Michael Solomonov did. And now, I can’t imagine living in Philly without it.

Hungry Pigeon, Queen Village
Another place that makes this list on the strength of their breakfast sandwich (get it with scrapple — trust me). But Hungry Pigeon also has one of the best bakers in the city working in the back (Pat O’Malley), and you’d be an idiot if you passed up a shot at his croissants or cinnamon rolls. 743 South 4th Street 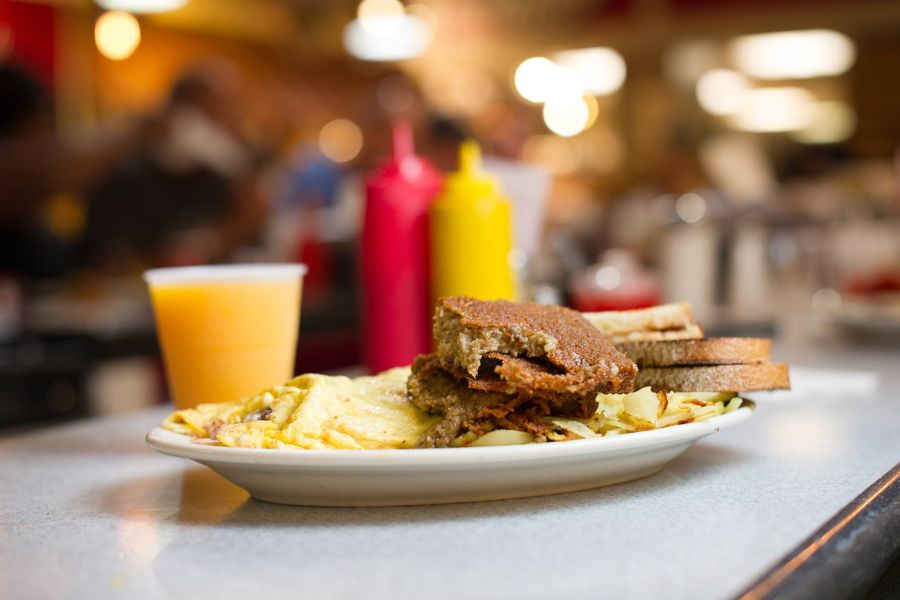 The Best Breakfast in Center City

Little Spoon Cafe
The plain old buttermilk pancakes are good. The lemon-ricotta pancakes are even better. And if you’re looking for something different, the kitchen at Little Spoon also does Cabot cheddar and chive savory pancakes topped with apple whipped yogurt and a cider gastrique. 1500 South Street

Dutch Eating Place
This long-time Reading Terminal Market classic does hearty breakfasts and huge business. The coffee is bottomless, the creamed chipped beef is one of those things you have to try before calling yourself a real Philadelphian, and the pancakes are as big as your face. 51 North 12th Street

Double Knot
Yeah, that place. It does  some of the best dinners in the city. But, really, it’s an all-day cafe with a pastry-heavy breakfast service, Elixr coffee and a chill, coffeehouse vibe. 120 South 13th Street

Pearl’s Oyster Bar
No, really. I know the name might be misleading, but this seafood joint at Reading Terminal does a solid, sit-down breakfast with bacon and banana french toast, shrimp and grits benedict, and fried chicken and waffles. 51 North 12th Street

Miles Table
Simple and straightforward local cafe with some great breakfast sandwiches and a dedicated crowd of breakfast and lunch fans. 1620 South Street 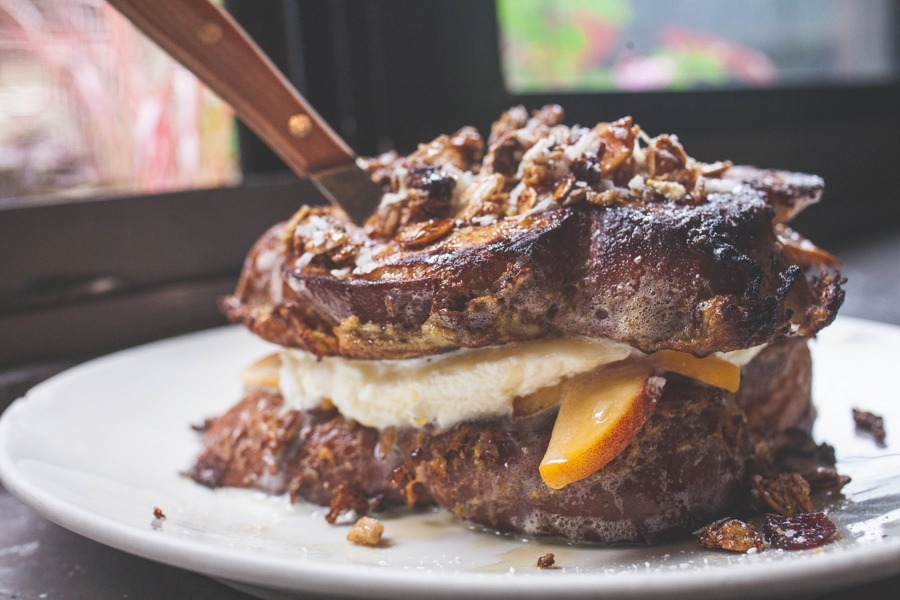 The Best Breakfast in Fairmount

Cafe Lift
Get there before 9am and you can have challah bread cannoli french toast for $6. Arrive a bit later, and there are migas, crespelle or a Texas Tommy benedict waiting for you. 428 North 13th Street

Sabrina’s Cafe & Spencer’s Too
There are five Sabrina’s locations in and around Philly — from Collingswood to the Italian Market. But Fairmount neighbors get to wake up to frittatas, huevos rancheros, steak and eggs or omelets. 1804 Callowhill Street

The Best Breakfast in West Philly and University City

Walnut Street Cafe
Seriously? One of the best breakfasts you’re going to find anywhere in Philly, not just in UCity. It’s fancy, it’s pricey, and it’s also worth it. Anything from baker Melissa Weller’s pastry case will be fantastic. The simple egg dishes are classed up with perfect technique in the kitchen. Plus, they make their own scrapple, which is nice. 2929 Walnut Street

Renata’s Kitchen
All the basics, sure. But also a Cuban sandwich with eggs and potatoes, chicken and waffles, merguez sausage shakshuka and a simple Lebanese omelet with scallions and parsley. 4533 Baltimore Avenue 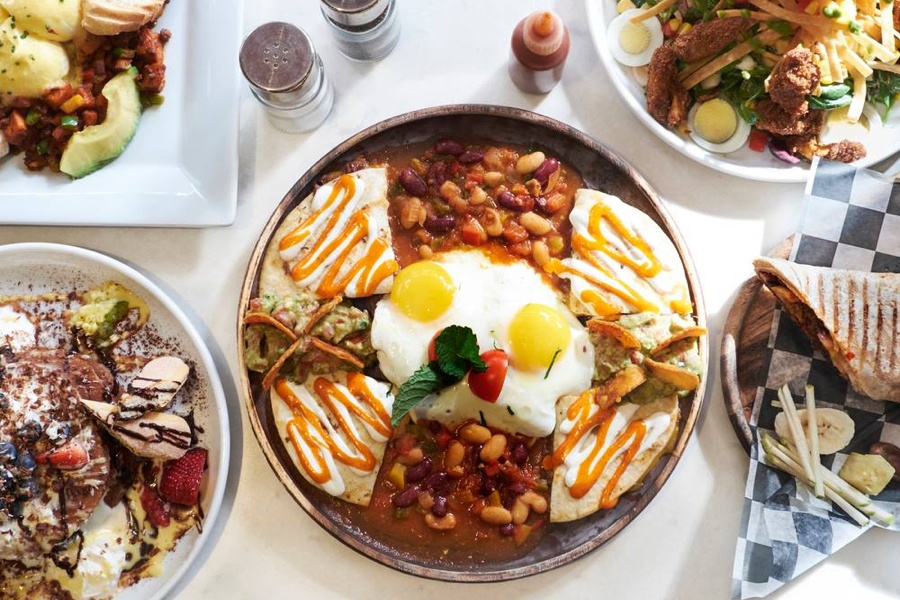 Cafe La Maude
French-Middle Eastern breakfast in an environment that’s like a classic Parisian cafe. Or a movie about a Parisian cafe. Cafe La Maude is basically a breakfast-all-day, every day kind of operation offering everything from croque madam to foul moudamas. 816 North 4th Street

Philly Style Bagels
Fermented in small batches, boiled in beer, hand-rolled and then baked — the bagels here make up the backbone of the entire menu at Philly Style, being used for breakfast sandwiches, bagels with spreads and, you know, just plain bagels. 1451 East Columbia Avenue

Front Street Cafe
Waffle-battered fried chicken bites, bananas foster pancakes and smoothies from the bar. Only way to make it better? Eating it out on the beautiful back patio on a sunny morning. 1253 North Front Street

Pete’s Clown House
A clown-themed neighborhood diner with big breakfasts for some of the lowest prices you’ll find anywhere. This place can serve as a serious look inside the soul of Philly. Or just a place to get some cheap eggs and homefries on a Saturday morning when you can’t take the lines at Honey’s or Reading Terminal. 3878 Frankford Avenue

Green Eggs Cafe/Medusa Trattoria
The new Fishtown locations from the Green Eggs crew began life as an Italian lunch and dinner place, doing pizzas, pastas and the like. But the plan was always to open for breakfast as well, doing it Green Eggs-style in the morning, a little half-and-half at noon, and Medusa up everything for dinner. And it seems to be working for them. 2327 Gaul Street

Suraya
Yeah, it’s one of the best dinners in Philly. But Suraya — the massive Lebanese all-day cafe and market — began life as a breakfast and lunch spot, and they still do that very, very well. Pastries, yogurt, Lebanese omelets — they’ve got it all. And all of it is delicious. 1528 Frankford Avenue 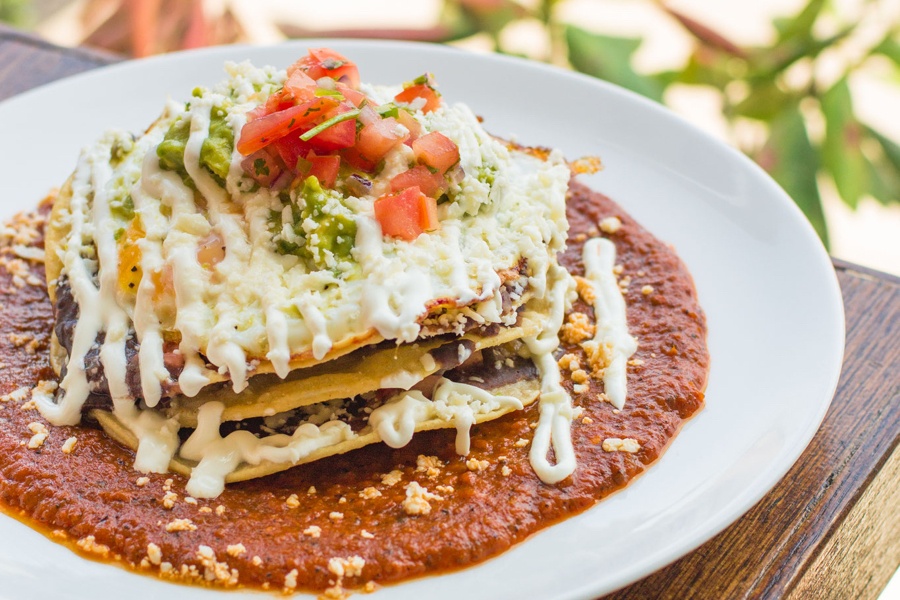 Ants Pants Cafe
This is the original location (there’s another one on 4th Street), and the one that made the reputation of this Australian-inspired breakfast and lunch joint, which opened more than a decade ago in a former psychic’s shop with the hands-down weirdest name in Philly. 2212 South Street

Cafe y Chocolate
You want chilaquiles or molletas? This is where you go. Same thing with Mexican breakfast pastries, Oaxacan hot chocolate or various sur de la frontera tofu dishes. Cafe y Chocolate is one of those places that isn’t nearly as well known as it ought to be outside of its own neighborhood. We’ve done the best we could to change that now, but if you get there quick, you might still be able to get a table. 3411 South Norwood Street

Tasty Toast
They do chicken wings and waffles here, which I love (because its easier to eat than full-on chicken and waffles). There’s also pancakes, French toast, waffle sandwiches, rice bowls and lots of grits. 1320 Point Breeze Avenue 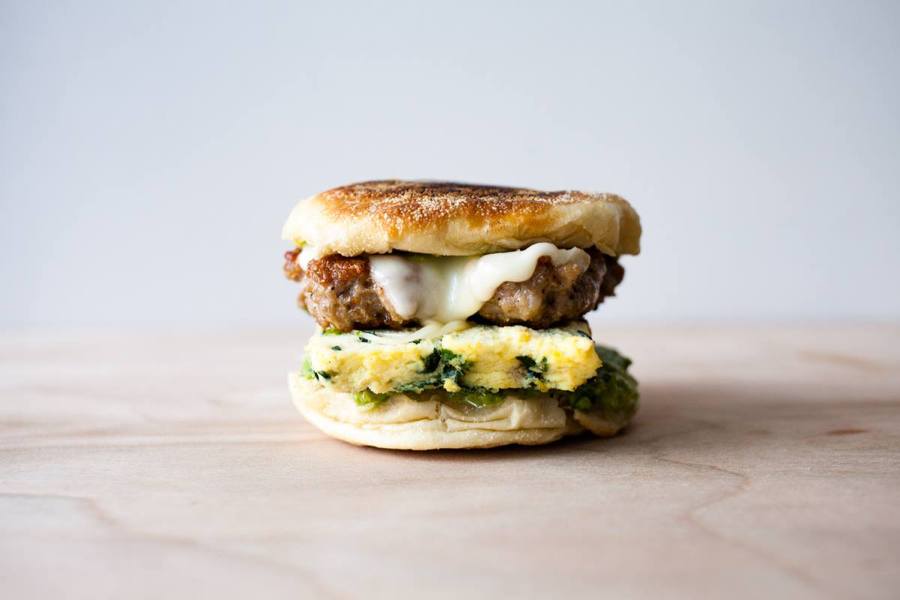 Parc
The quintessential Philly breakfast experience, Parc is about seeing and being seen almost as much as it is about the food. It is a power breakfast experience with a French accent; croissant, salmon tartine and vol au vent sharing space with pancakes and avocado toast. 227 South 18th Street

Spread Bagelry
Montreal-style bagels in the heart of Rittenhouse, with spreads that are all local and homemade. The breakfast sandwiches mounted on those bagels are awesome, with The Cure (brisket, eggs, smoked bacon and cheddar) having become a daily tradition for many of the neighbors. 262 South 20th Street

a.kitchen
Their omelet du jour could be the best omelet in town. Same goes for the breakfast sandwich. 135 South 18th Street

Sam’s Morning Glory Diner
Everything made from scratch, everything made with love. That’s what Sam’s strives for every day. And you can taste it in the whipped peach butter on the pecan waffles or in the monkey french toast stuffed with bananas, caramel, mangoes and whipped cream. 735 South 10th Street

Famous 4th Street Delicatessen
The Jewish deli has been serving the neighborhood matzoh brei and pastrami and eggs since 1923. If you haven’t been there yet, what are you waiting for? 700 South 4th Street

Red Hook Coffee and Tea
Chalkboard menus, egg sandwiches, occasional art shows, cold-brew coffee, omelets and fresh muffins. What more do you need? The people who love this place, love it forever. And if you haven’t been yet, it is absolutely worth checking out. 765 South 4th Street 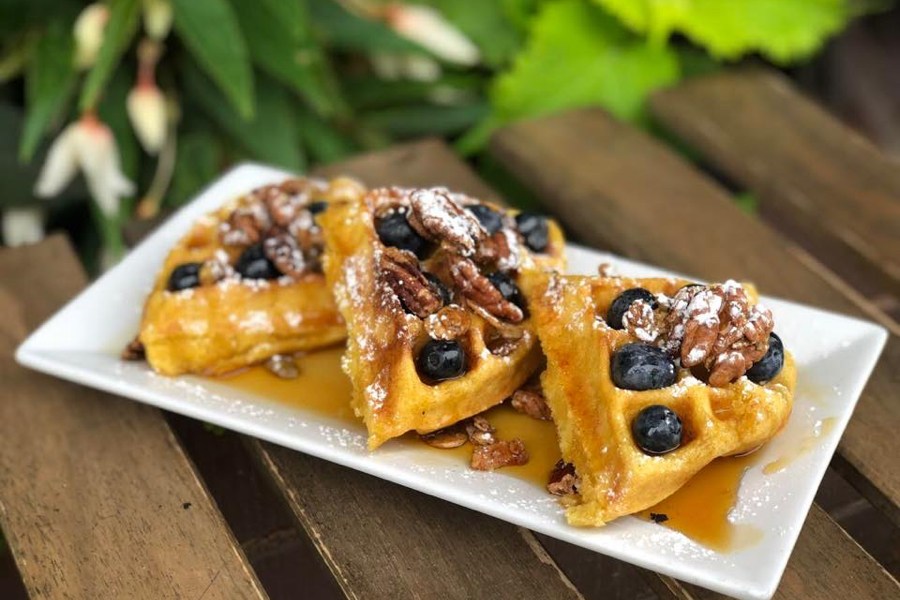 The Best Breakfast in East Passyunk and South Philly

The Tasty
Classic diner lines, all blue Formica, quilted aluminum and bottomless cups of coffee. But The Tasty? It’s vegan, offering (on the one hand) tofu breakfast burritos and herbed cashew cheese with tomato and capers on toast. On the other hand, pancakes, waffles and biscuits, which have been vegan all along. 1401 South 12th Street

Chhaya Cafe
Everything at Chhaya is either made in house or sourced locally. The menu is simple, fresh and full of diner classics like egg sandwiches, pancakes and quiche. 1819 East Passyunk Avenue

Brunic’s Luncheonette
Breakfast joints simply don’t get any more classic than Brunic’s, where 2 eggs, homefries and toast can still be had for less than four bucks and the counter service is quick, competent and just friendly enough without it being, you know, weird. 2000 South 17th Street