The man known simply as Lê has a lot of f-ing things to say in this f-ing interview. 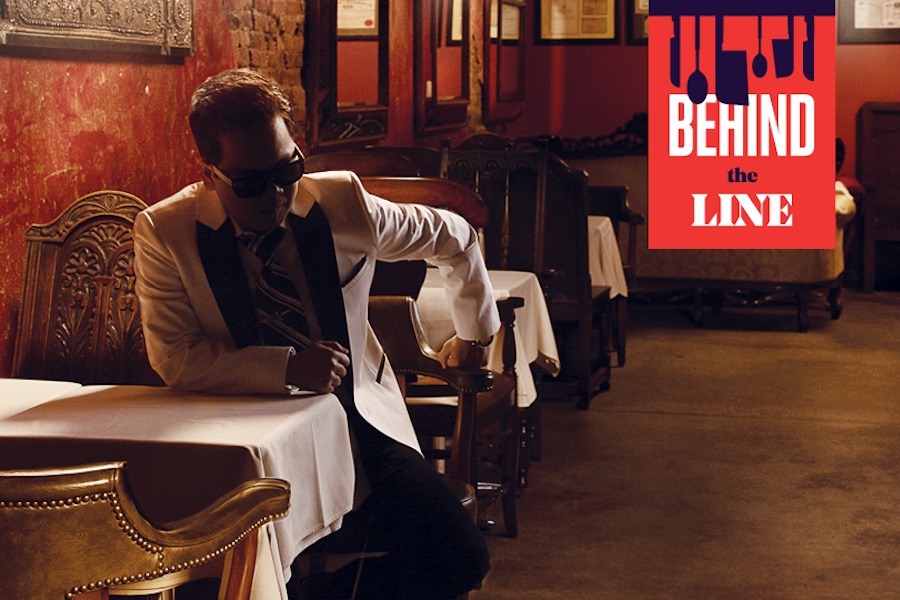 I was born in… Saigon. I grew up in Saigon until we escaped by boat.

I came to Philadelphia… to open Hop Sing Laundromat. We signed the lease in 2010. I got here maybe in 2009 to look for spaces. The old Han Dynasty space — not the current Han Dynasty, the old Han Dynasty — that space was a close second. We were gonna buy that building outright, but then we walked away from that deal. Can we go off the record? [Off-the-record conversation ensues.] We got lucky. I think we would have hated Old City. My partner and I went and looked at the space here and loved it even though it was a shithole.

The Hop Sing Laundromat space used to be… an Indonesian restaurant and before that it was that Singapore vegetarian place. There were three or four places there that just went under. The Chinese thought it was cursed.

My partner in Hop Sing Laundromat is… somebody whose name I can’t mention. [Another off-the-record conversation.] He has literally never walked into Hop Sing during business hours. He has never set foot in that place then. Ever.

Before Philly, I was… in New York City, working in a hotel in the beverage department. That’s the last time I ever worked for someone.

My first job in the food and beverage biz was at… KFC. Yes, Kentucky Fried Chicken. I lasted for four hours. Here’s what happened. I asked my dad for this pair of sneakers, high-top red-and-white sneakers at the shop. I asked him for money. He said I should get a job. So I applied for a job at KFC. I was still young, still in school. I was there for an hour and the guy told me to fry chicken. Have you ever seen those KFC fried chicken machines? Huge vats of oil? I told him that I shouldn’t be operating that. I told him it wasn’t safe. He said that I’d be fine. And I walked out.

I got the idea for Hop Sing by… driving through 48 states visiting bars and other places and clocking over 36,000 miles.

I recently scaled back to three days a week at Hop Sing… for so many reasons. After eight years, an almost two-year renovation, being the only one holding the key for six years, I had enough. We have cheap rent. We can do it. The best answer I can give you is this: I look at this biz as an endurance sport. Crossing the finish line means a lot more to me.

One Philly bar I will never walk into again is… [Pauses] There are a few. But I’m not going to name them.

I usually wake up at… 2 p.m. on days after work. But for now, for the past few days — this is the first week we are not open on Tuesday and Wednesday — I don’t know what to do with myself, to be honest with you. I have no idea what to do. I got up at nine this morning. And tomorrow I will get up at nine. And I am lost. Just lost.

Some of the more famous people to have come to Hop Sing Laundromat have been… professional baseball players. It’s shocking to me. To this day, I don’t understand why. I think that Chase Utley must have talked us up to other players and other teams. We have had so many Mets, Braves, and Twins here. Last year, Jayson Werth, when he was playing for the Nationals, he just walked in by himself. Sat at the bar by himself. He ordered a drink by himself. And he drank it by himself. I think that they know that when they come here, people leave them alone. And then Erin Elmore came in and brought Ed Rendell with her. We asked him for ID, and he looked at us like we were crazy. I don’t think he’s ever been asked for ID.

I wish that Philly’s Chinatown would… [Pauses] You’re going to get me in trouble with the locals. [Off-the-record conversation] We thought when we opened here that we were going to maybe ride on the coattails of the restaurants here in Chinatown, because there are so many good restaurants but there wasn’t a single good cocktail bar. But what people tell me is that Hop Sing changed the way that people come to Chinatown. So it’s a little bit of the other way around.

The most expensive meal I ever had in Philadelphia was… by accident. I walked into the Rittenhouse Hotel. What’s that restaurant called there? Anyway, they were having this big anniversary tasting dinner and there were all these chefs cooking there. It was like maybe $350 or $400 per person. [Ed. Note: It was $350.] I walked in by accident and sat down and then learn this and then what are you going to do, get up and leave?

For my next vacation, I hope to go to… Hawaii or Alaska. I’ve been to all other states, so I want to get Alaska and Hawaii under my belt soon.

My relationship status is… That I’ll try anything. Your readers will know that’s a joke, right?

The best thing about my job is… that I get to not serve assholes. I get to serve the people that I want to serve. Decent human beings.

The worst part about my job is… that I have to meet those assholes at the door.

The easiest way to get banned from my bar is to… behave like an asshole. We have a dress code. No cameras. No pictures. No selfies. No talking on the phone in the bar. You can go to the lobby for that. You don’t have to sit at the bar and yell on your phone. We have banned almost 2,900 people last count. Also, lousy tippers. Look, you spend $100 and leave $2 or $3 and then on the way out you say how much you love this place. Well, no. It’s about respect. We want our staff taken care of. We won’t let it happen again to them. We won’t let the same people do the same thing to them twice. That would make us horrible management.

One spirit I cannot stand… is — wait a minute. You’re trying to get me in fucking trouble. I already get enough hate mail. [Another off-the-record-conversation]. OK. OK. One spirit I cannot stand is any stupid thing that is praised by a quote-unquote mixologist. Make sure you put the quote-unquote around that word. They are fucking idiots. Anybody who calls themselves a mixologist is a fucking idiot. And any spirit that a “mixologist” likes to use fucking sucks. Fernet. Fernet. Do you know what Fernet is? It’s a terrible thing. Fuck that shit. These “mixologists” don’t even know what it is. They drink it because it’s cool. Anything that makes people look cool — or that they think makes them look cool — I fucking hate that shit.

The most popular cocktail at Hop Sing Laundromat is… still the Henry Box Brown. The one with the rum and red grape juice. Everybody has always raved about that, and it’s so simple. People in restaurants in D.C. are making them now.

The most expensive cocktail at Hop Sing is… our Hop Sing Manhattan. It’s $16. We use Booker’s bourbon, which is an $80 bottle of bourbon. Make sure you put that in there. We use Booker’s. Our prices are very reasonable.

My suits are… always altered by my tailor in New York. I would never buy a suit without it being touched by my tailor, who is the head tailor for Dolce and Gabbana. I prefer British and Italian suits.

I buy my sunglasses… on the Internet. I own maybe 200 pairs. They are vintage. New old stock, I think is what you call it.

The stupidest drink anybody has tried to order at Hop Sing is… a slippery nipple. This middle-aged lady asked me to make a slippery nipple and I looked at her and I said there was no way in hell that I would do that. A middle-aged woman should not be ordering that. No fucking way.

If you want to work for me… you have to be willing to start at the bottom. We don’t hire bartenders or servers. We only hire bar backs. And you work your way up. For the record, we have never hired anyone who used to work for a quote-unquote cocktail bar in Philadelphia. Ever. But, I can tell you this: Every single cocktail bar in Philly, so-called, has hired our people to work for them.

The single most common mistake that bartenders make is… assuming they know everything.

The most unusual thing I have ever eaten… is a python. In Vietnam. I was a kid. We caught it on my uncle’s farm. It was huge. It was a monster. That thing could have eaten a cow. It took twelve men to carry it, and we ate it.

One bar trend I wish would die is… any cocktail with multiple bitters in it. Bitters is like the MSG of drinks. If you use more than one type of bitters in one drink, you don’t know what the fuck you’re doing.

If you tell me that you want to open a bar in Philly, my advice to you is to… buy me out, motherfucker. They’ll know I’m kidding, right?