We talked with 2018's Rising Star Chef about the first dessert she ever made, dating another chef, and what it feels like to be the second pastry chef ever to win the category. 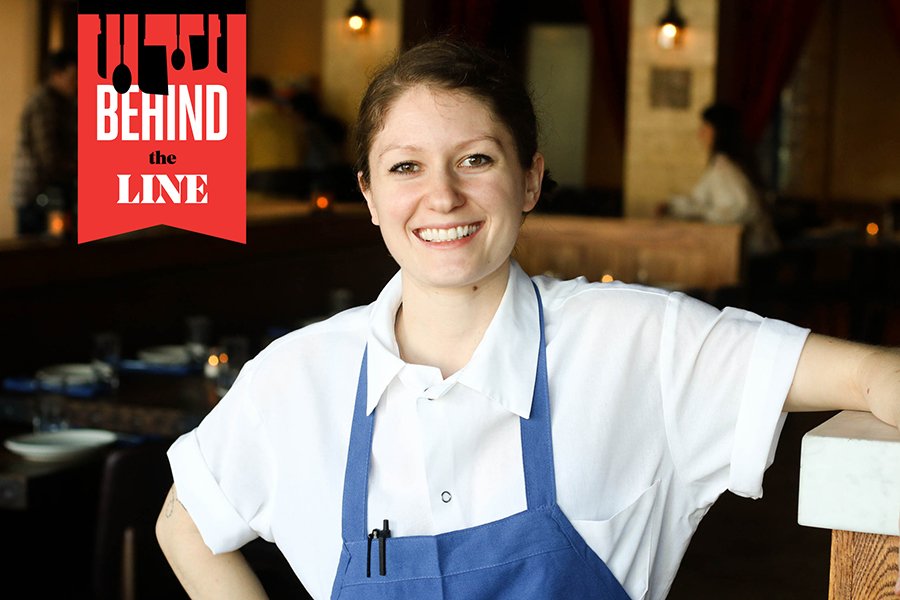 Camille Cogswell made history earlier this month when she was named Rising Star Chef at the 2018 James Beard Foundation Awards — only the second pastry chef to do so in the foundation’s history and Philly’s sole winner this year. We sat down with the Zahav pastry chef for a chat after her big win in Chicago.

I grew up in… Asheville, North Carolina. My family moved there when I was going into middle school. Before that, we lived in Fayetteville. Neither of my parents were in the military, but they’re both from the South.

The first time I ever made dessert… was with my mom. One of the memories that I have is making chocolate chip cookies with her. We did that a lot together — just the Toll House recipe.

When I was a kid I wanted to be… a teacher. I think I liked teaching mainly because I was so obsessed with organization and that aesthetic, which also translates into the pastry chef world and cooking — being precise, attention to detail. There were a couple Christmases when I was young when I asked for office supplies.

I started cooking when… I was in high school. Asheville High School had a really good culinary arts program, so I started taking culinary classes, one of which was an internship at a local bakery. After high school, I wasn’t quite sure what I wanted to do — I was hesitant to go straight to culinary school and get a very specialized degree, then realize that I wanted to cook as a hobby rather than a career.

Before I went to culinary school, I… went to UNC-Chapel Hill. I studied anything and everything — gen ed courses, theory of religion, math, science. But at the end of your third semester is when you declare a major, and I hadn’t found anything else I wanted to do or study as much as cooking for the next three years, much less the rest of my life. I dropped out and enrolled in the CIA — it’s the Hogwarts of culinary school.

I love being a pastry chef in Philly because… the food community here is super tight — everyone is so welcoming and cool. I came here at a time when the pastry scene was just starting to blossom. Now there are more and more wonderful bakeries and pastry chefs that are doing more pastry-focused work.

When I found out I was nominated for a Beard Award the first time… it was a huge shock. I had only been the pastry chef at Zahav for a year, and I didn’t even know the nominations were coming out that day. Mike [Solomonov] called me in the morning, while I was still in bed, and he told me I was nominated for rising star chef. I didn’t know what he was talking about — I had to Google it. I was completely baffled. But it was wonderful to know that I was doing something right.

When I found out I was nominated the second time… I felt a lot of excitement and relief. This year, I was not expecting to get nominated, but I was expecting the nominations to come out.

When my name was announced at the ceremony, it was… really startling, because Rising Star is the first category. We sat down, they had the opening bit with Carla Hall, and then that was it. I had not prepared anything to say. And then it happened. When Dominique Crenn opened the envelope, she stalled, and she said, “Oh, I love Philadelphia,” before she even said my name. It was incredible.

I think I won because… the support that this community in Philly has given me has been so insane. I’ve been so thankful for how many friends I’ve made, how loyal they are. That plus support and a platform from Mike — he has national and international recognition, and he brought a cuisine to the public eye in the U.S. that wasn’t popular before. Mike taking me to wine and food festivals, cooking with him, and his generously including me in all the fun and cool stuff he gets to work on has been incredible and given me a lot of exposure.

The vibe at this year’s Beard Awards ceremony was… different. You could kind of feel the momentum and the passion and the desire for change in the air. When Jose Andres made his speech, there wasn’t a dry eye in the house — it was so impassioned and so moving, and it really stuck with me. Everyone really came together about being the change instead of just wanting the change.

My thoughts on #MeToo in the industry are… I support anyone who has the courage to come out about their experiences, and I think it’s an extremely important movement for our generation to set a standard for all the generations to come. I don’t have any specific experiences of my own to share, but I am inspired by the women who have shared their experiences.

Dating another chef is… great. My fiancé [Amis chef Drew DiTomo] and I have a lot of respect and appreciation for what the other person does so it helps us to be understanding of each others’ schedules and commitments. He’s my biggest fan. He’s a very good chef, he’s very good with people and he’s a great teacher and manager, so I ask him a lot of advice on that type of stuff.

My dream vacation would be… a road trip through the Deep South and southeastern U.S., where I grew up. I’d love to go to South America, Japan, southeast Asia. I’ve never been to Israel, although we’re working on that.

My favorite dessert to make at Zahav is… probably the malabi custard. It’s an Israeli milk pudding that we top it with whatever fun, delicious ingredients are around at the time. Right now, it’s got fresh strawberries, strawberry jam, and Lebanese rose cooked into it, with an almond crumble.

When I’m not working, I… have gotten really into gardening and taking care of my houseplants. I recently decided if I wasn’t in the food world, I would be a horticulturist. In the past few years, I’ve found so much joy in plant life.

Winning Rising Star Chef was particularly validating because… Christina Tosi [of Momofuku Milk Bar] was the first pastry chef to win this award in 2012, and I’m only the second one — before that, no pastry chef had won this category. She’s the first American pastry chef to get the celebrity status she has, and to do it with down-home American comfort desserts is incredible. She opened the door, and I want to help kick it wide open.