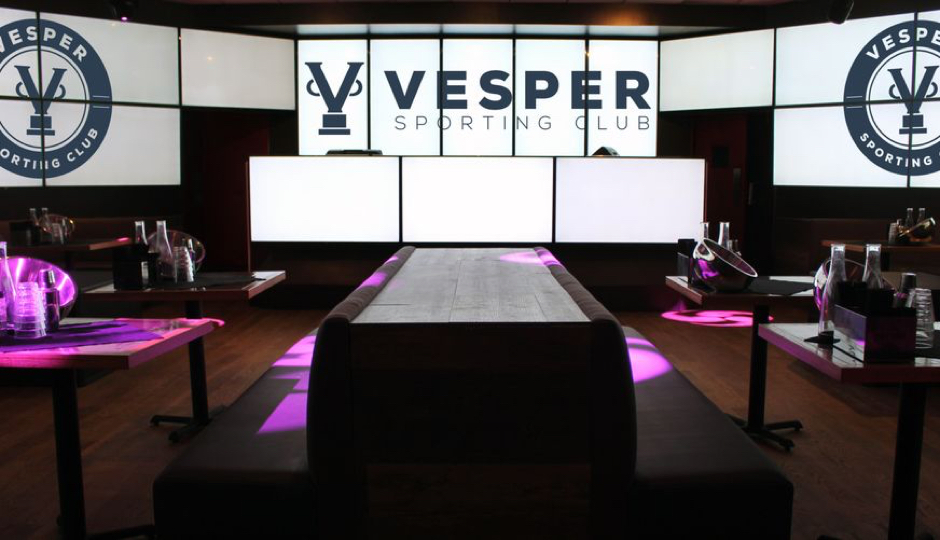 Vesper Sporting Club, the latest iteration of the century-old Vesper Club — once a private dinner club where power brokers and mobsters met to dine and deal, now a nightclub-sports bar-bruncherie-speakeasy that already sounds like a waking nightmare — has its grand opening on Friday, October 6th at 223 South Sydenham Street.

The hellish-sounding space boasts more than 40 4k Ultra HD televisions, including a 28-screen video wall in the main part of the space and a semi-private viewing area, which will show, according to the opening announcement, “every game.” The kitchen is serving up bar fare like sliders, mini cheesesteaks, wings, fries, and sandwiches as well house-made (?!) seasonal (?!?!) sorbets (?!?!?!). There are also ginormous shareables like a three-foot cheesesteak and a five-pound Porterhouse — just the thing to fuel a gaggle of growing bros through another session of homosocial bonding.

And of course, there’s brunch on weekends, featuring $25 bottomless mimosas and rotating themes. They kick off with “Down the Rabbit Hole,” an Alice in Wonderland-themed brunch, this Saturday (there better be actual rabbit on that menu). On Friday and Saturday nights, there will be DJs, cocktails with names like The Blue Vixen, and, presumably, dancing.

In addition to all that, the club also has a speakeasy section, which must be entered through a rotating bookcase that leads through a wormhole to 2010, when speakeasies were still relevant. (This may portend challenges based on past Vesper incarnations.)