These companies make it easy to source delicious, nutritious, and sustainable beef. Here's how they stack up. 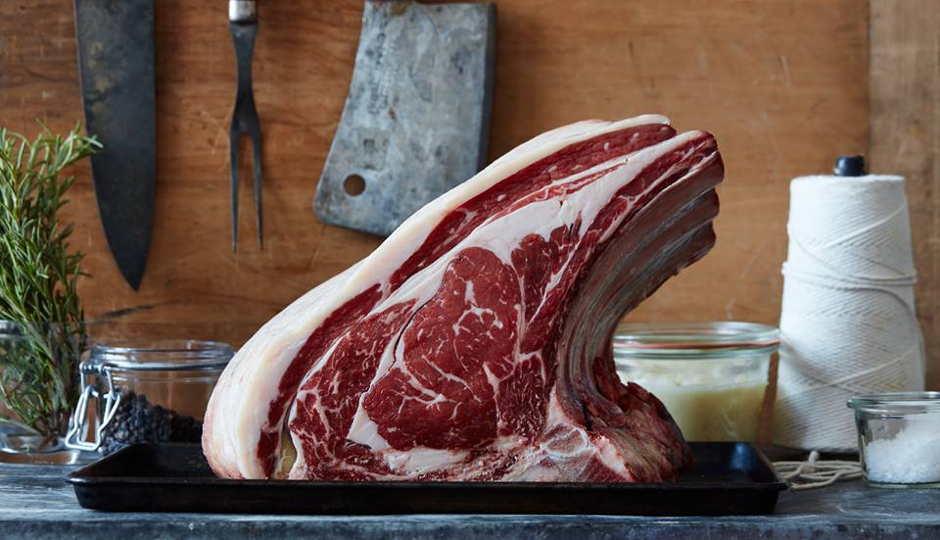 Sure, it’s easy to find organically grown fruits and veggies at your neighborhood farmers’ market, grocery co-op, and even some supermarkets. But sustainably-raised meat? That’s much harder to find, with few farmers’ market vendors, CSAs, or retailers offering it — and then, it’s almost always frozen.

A handful of new companies that specialize in nontraditional models for supplying pasture-raised meat want to change that. New, online-based supply chain models that have started serving Philadelphia in the past year enable consumers to easily get their hands on high-quality, farm-identified grassfed beef that’s as tasty as it is environmentally friendly — and delivered to your neighborhood or your door.

First, let’s take a step back: why bother with grassfed beef in the first place?

It goes without saying that it’s better for the animals. Cows have evolved to eat grasses and nothing but. (That’s what those four stomachs are designed to break down.) While even cows destined for the conventional beef market are raised on grass for up to 6 months, they’re then sent to crowded, filthy feedlots to be fattened on corn and soybeans — which make the animal grow to a nice hefty weight in a matter of months rather than years but have negative effects on the health of the animal and on the nutrition of the end product. Some cows are raised primarily on grass for most of their lives, then “grain-finished” to help fatten them and add marbling shortly before slaughter.

Oh, and before we go any further: if anyone tries to sell you “grassfed” pork or chicken, they probably have a grassfed bridge to sell you, too. Chickens and pigs can eat corn, soybeans, bugs, vegetation, and vegetable scraps just fine — look for pork and chicken that’s labeled “pasture-raised.”

Okay, back to ruminants: Cows who are raised on grass their entire lives (a.k.a. 100 percent grassfed) will take longer — we’re talking years versus months — to get to a good weight before slaughter. These animals, which are often heritage breeds that haven’t been bred to fatten quickly on corn and soy for the commodity market, live longer, healthier lives. And their meat is better for us: happy, healthy cows make for more flavorful meat that contains less total fat, more omega-3 fatty acids (which promote heart health), higher levels of CLAs (conjugated linoleic acids), which are thought to reduce the risk of cancer and heart disease, and more antioxidant vitamins like vitamin E than their conventionally-raised counterparts.

In addition to the taste, nutrition, and animal welfare benefits of grassfed beef, closed-loop, pasture-based systems help maintain healthy soils, which trap carbon and require only sun and rain as inputs. They’re a sustainable alternative to the environmentally destructive practices of the commodity beef industry. And what’s more, raising cattle on grass makes for a more profitable business — grassfed is better for farmers, too.

And I can say from experience — as someone who’s been eating grassfed beef from local farms for the past seven years and is currently (disclaimer alert) a satisfied Primal Supply customer, grassfed beef tastes really, really good.

Note that we’re focusing specifically on nontraditional models for sourcing grassfed beef that have launched service in the Philly area in the past year or so here — no trip to the market needed. But if you’re a consumer who wants to meet your meat — and your butcher — face to face before buying, we recommend paying a visit to La Divisa Meats, the pasture-based, whole-animal butcher shop in Reading Terminal Market. Butcher and founder Nick Macri and his crew have been working with Chester County’s Wyebrook Farm to source their grassfed beef for the past year or so.

These are the grassfed beef delivery services currently vying for Philly’s food dollars: Crowd Cow, which now ships nationwide from farms and ranches all over the country, including some Pennsylvania operations, sells off different grassfed beef cuts and bundles from a given animal with a Kickstarter-esque platform. Li’l Ponderosa, a ranch near Chambersburg, has expanded their grassfed beef sales to include home delivery to Philadelphia, with a subscription program coming out later this year. And Primal Supply Meats’ Butcher’s Club program, started last year by former Kensington Quarters head butcher Heather Thomason, delivers fresh cuts of grassfed beef and pasture-raised pork each week to pickup points around Philadelphia.

Check out the specs, then see the results of our taste test below. 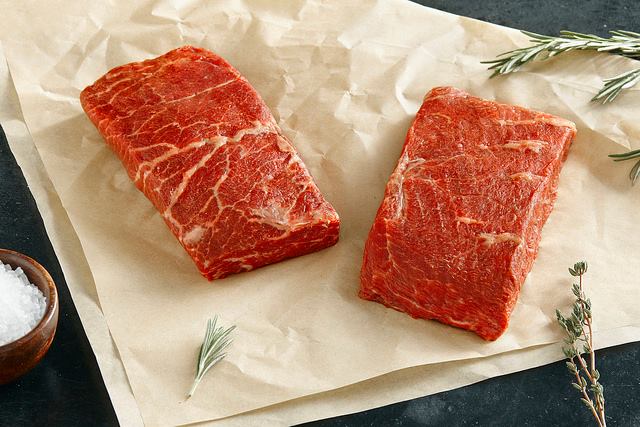 What it is: This Seattle-based platform for selling and distributing grassfed beef was started by the former CEO of Urbanspoon.

How it works: On Crowd Cow’s website, consumers can buy individual or bundled cuts from a yet-to-be-processed cow sourced from grass-based livestock producers across the country; their source farm that’s closes to Philly is Tussock Sedge Farm in Bucks County. Once all the cuts from one cow have been claimed, the animal is processed and the orders are shipped directly to customers the next week. If not every cut is sold by the deadline, the deal is off, providing a Kickstarter-like incentive to get your friends and neighbors on board. Note that some of the farms offer grain-finished pastured beef, not just 100 percent grassfed.

What they offer: Crowd Cow bases its packages around steaks, from filet to skirt, with lesser steak cuts and ground beef filling out the package. You can also get bulk ground beef in 10-pound lots or single cuts like hanger steak sold on their own.

Breed: Crowd Cow offers up source-identified heritage breeds from independent farms and ranches all over the country, as well as importing high-tone Wagyu raised in Japan. Their suppliers local to the Philly area are Tussock Sedge Farm in Bucks County, which raises Red Angus. Lil’ Ponderosa — which also has its own delivery service — sometimes sells their Black Angus through the platform. Crowd Cow will soon be sourcing grassfed beef from  Thistle Creek Farms, which is based in Central Pennsylvania. 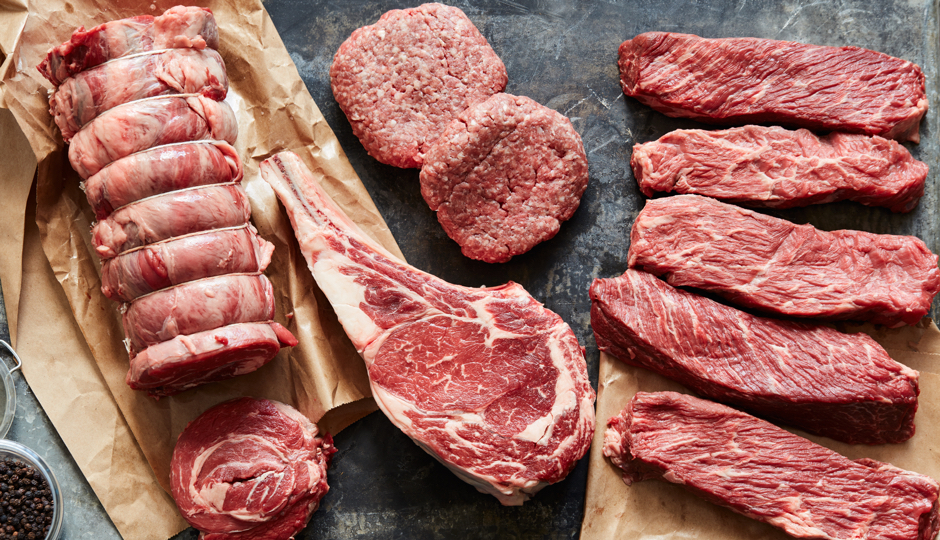 What it is: This small-scale, woman-owned business works directly with farmers and ranchers in Pennsylvania to source pasture-raised beef, pork, chicken, and eggs for its Butcher’s Club program and farmers’ markets. They also provide wholesale beef, from burgers to 8-week dry-aged loin steaks, to the likes of Vetri, Aldine, and Tired Hands Fermentaria.

How it works: Members of Primal Supply’s Butcher’s Club sign up online for a weekly or alt-weekly package of grassfed beef and pastured pork (the two are bundled together) that’s cut to order each week and delivered, CSA-style, to pickup sites around the city — think Martha in Kensington, Dock Street in West Philly, Crime & Punishment in Brewerytown, and The Farm & Fisherman in Cherry Hill. The perpetual subscription is pay-as-you-go; members can put their account on hold  if they plan to be out of town during a pickup.

What they offer: The small share includes a pound of ground beef or sausage and two to three pounds of quick-cooking cuts like non-loin steaks and chops. Upsize to a medium (six to seven pounds) or large share (10 to 11 pounds) to include braising cuts or whole chickens. There’s even a pastured egg add-on option. 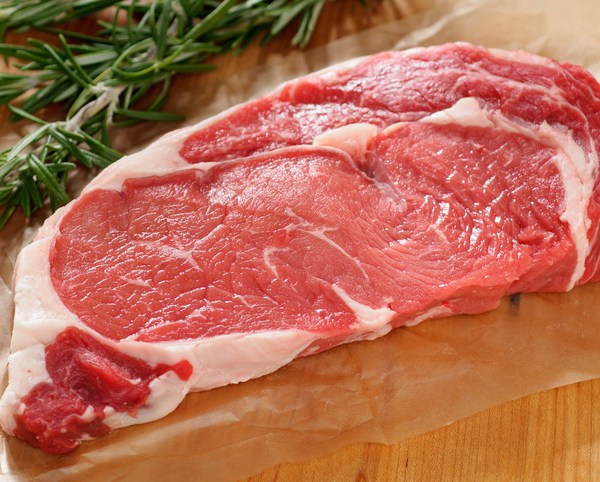 What it is: An independent cattle ranch in Chambersburg, Pa. that’s been selling beef halves and quarters for locals’ freezers since the ’80s has partnered with chefs from John J. Jeffries in Lancaster to open their own meat processing facility and expand their offerings to include mail order customers.

How it works: Customers order online, and the meat is shipped directly to them. A subscription program is slated to roll out this fall.

What they offer: Any cut off the cow, although less-plentiful cuts like hanger steak may sell out more quickly. They offer a la carte steaks along with “combination boxes” that include a wide variety of cuts, with a $75 minimum order to ship.

Breeds: A closed herd (meaning the farmers only breed their own animals with others in their herd) of purebred Black Angus.

We asked each company to send us a pound of ground beef and one “bistro” steak to cook up for our tasters. (While they each offer sought-after loin steaks like New York strip and ribeye, we chose to focus on cheaper cuts for the test, since these services are meant to make cooking great grassfed beef a convenient and relatively affordable weeknight option.)

We cooked samples to medium-rare (that’s an interior temperature of 125oF for steaks and 145oF or burgers), then served them up to our panel without revealing where each item came from. Tasters were asked to rate the meats from each source — first the steak, then tasting a plain cooked patty to get the straightforward flavor and texture of the ground beef, then a control burger on a potato bun dressed with mustard and ketchup to see how well it stacks up against other flavors — on a scale from one to five on tenderness, juiciness, flavor, and overall experience.

Across the board, the samples performed well: there wasn’t a bad — or even a “meh” — cut in the bunch. Our panel heartily enjoyed every burger and steak they tried. While there was some variation in scoring, as one taster put it, “I wouldn’t be mad if any of these showed up at my door.”

Primal Supply’s bavette — also known as flap meat, a part of the short loin that’s found beneath the fat on the belly of the animal — got the highest score, with the other two close behind. Crowd Cow’s flank steak was cut a little thin, closer to half an inch; while there’s nothing wrong with a thinner-cut steak, it means a smaller margin of error for a customer to avoid overcooking. One taster found the flat iron from Lil’ Ponderosa a tad chewy but gave it good marks; another named it her favorite of the bunch.

Crowd Cow’s 83/17 burger — sourced from Tussock Sedge — narrowly edged out Li’l Ponderosa’s 85/15 patty (we’re talking hundredths of a point here), with Primal Supply’s 80/20 burger a close third (tenths of a point). However, tasters said they lost the flavor of the Crowd Cow burger with the addition of only minimal condiments. The Primal Supply patties shrank a little more than the others, possibly because of the higher percentage of fat that rendered out in the cooking process.

Based on our research and our taste test, we’d recommend any of these three services to Philadelphia eaters who are looking to source more flavorful, sustainably raised beef from a source they can trust.

If getting your beef freshly butchered is your priority, Primal Supply is the way to go — you can even grab a beer at most of their distribution sites while you’re picking up your Butcher’s Club package. Feeding just one or two people or to get into the grassfed movement a little bit at a time? Buy a la carte cuts from Lil’ Ponderosa’s website or sign up for a small-sized Primal Supply share and choose to get deliveries every other week. If home delivery is a priority, Crowd Cow and Lil’ Ponderosa have you covered. Got a big family to feed? Consider a large Primal Supply share or one of the combo boxes from the other services.

What’s clear is that the benefits of grassfed beef — and demand for a more nutritious, more sustainable way to source a food most Americans have been raised on — are real.