A Room With A View: Dae Bak Reviewed

Center City has needed a serious Korean restaurant for a long time. Is Dae Bak the one we’ve been waiting for? 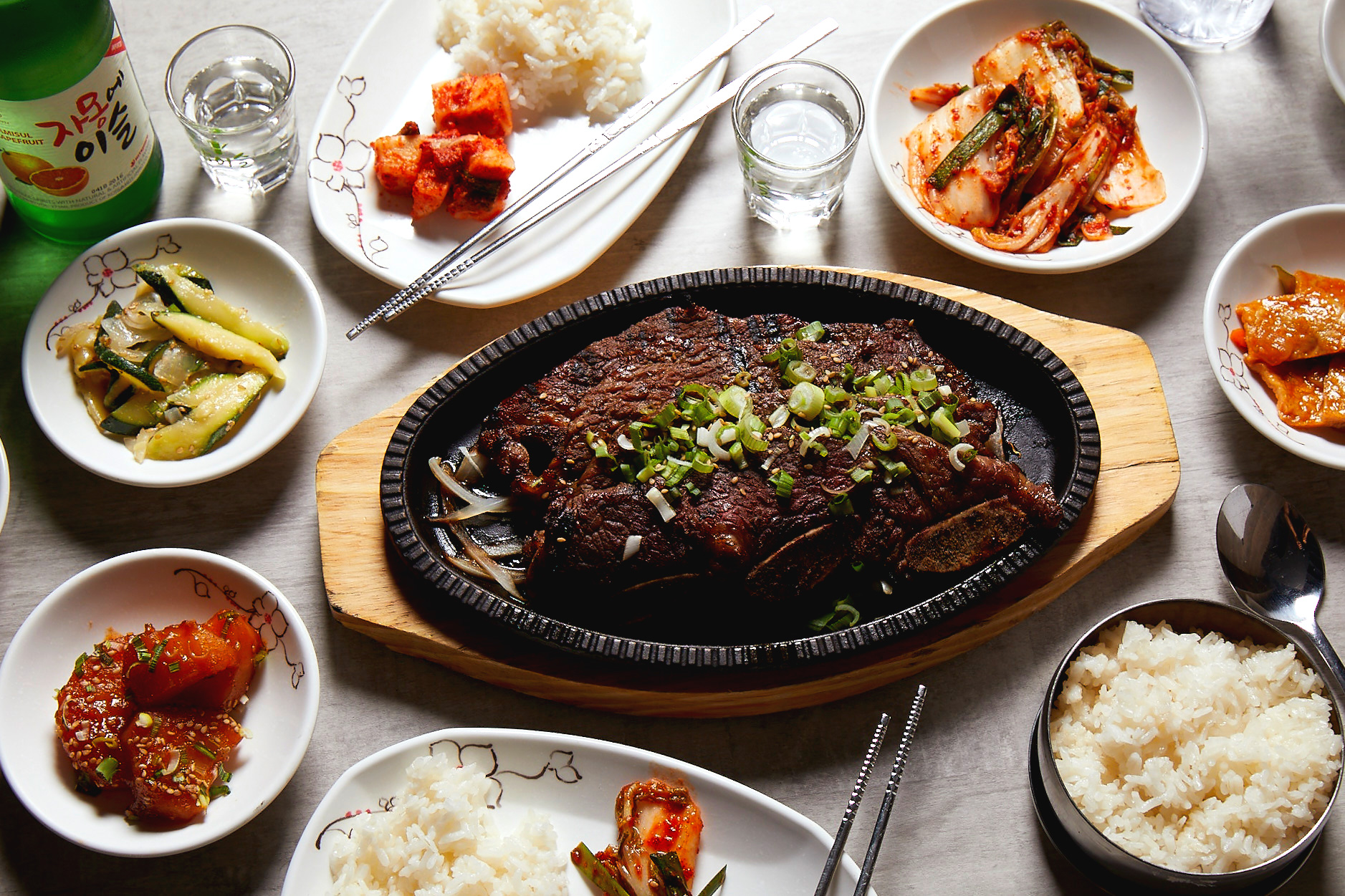 On a steamy Wednesday afternoon, I eat steamed mandoo dumplings with metal chopsticks and pork soondubu with a raw egg bobbing in the center, poaching slowly in the chili-spiked tofu broth. On the big flat-screen hung at one end of the room, the Food Network is showing an old episode of Pioneer Woman. She makes some cheap-jack garlic bread mounded up with cheese while I pierce the yolk of my egg and watch it leak yellow into the stew, while a radio somewhere plays Fleetwood Mac and tables of locals mix with high-school kids filtering up from the stalls downstairs, looking for something more substantial than rolled ice cream and bao.

The dumplings are excellent—salty and squishy, packed with minced pork and vegetables. The soondubu is as filling and comforting as it should be, smooth and heavy on the tongue, the egg adding a richness that makes it taste like I’m drinking an old-school French sauce, only razored up with heat and the competing savory/sour flavors that define so much of East Asian cuisine.

Order This: Dumplings, steamed or fried, pork soondubu and the seafood pancake; any of the stews if you’re fighting off last night’s hangover.

On another day, I arrive at Dae Bak just as the sun is going down, chasing shadows and flickering neon to the new Chinatown Square food hall, turning in through the doors and heading up the stairs. The restaurant is the newest thing in this very new thing for Philly—this conglomeration of Thai, Japanese, Cambodian, Mexican and Chinese food stalls—and Dae Bak sits on the second floor, with a commanding view out over Race Street. I grab a window seat and settle in, ordering a cold Coke and hae mul pajeon, an enormous seafood pancake made with little shrimp and scallops. I eat and burn my fingers, blowing on them between bites, and watch the families and couples around me tearing into a hundred different things all served in bowls—tofu stews, hot pots so big they must be shared, jjambong seafood soup and 12 more kinds of stew. There’s kimchi with pork and tofu, and duk mandoo kook, a soup made with rice cakes and dumplings that (with a different name, with a little kink to the spices) wouldn’t be out of place in some antique Appalachian cookbook, that (with a little refinement and a fancy garnish) could’ve made the table at Le Cinq. It’s a soup traditionally served on New Year’s Day in Korea. A day-after soup. Cure for whatever ails you. 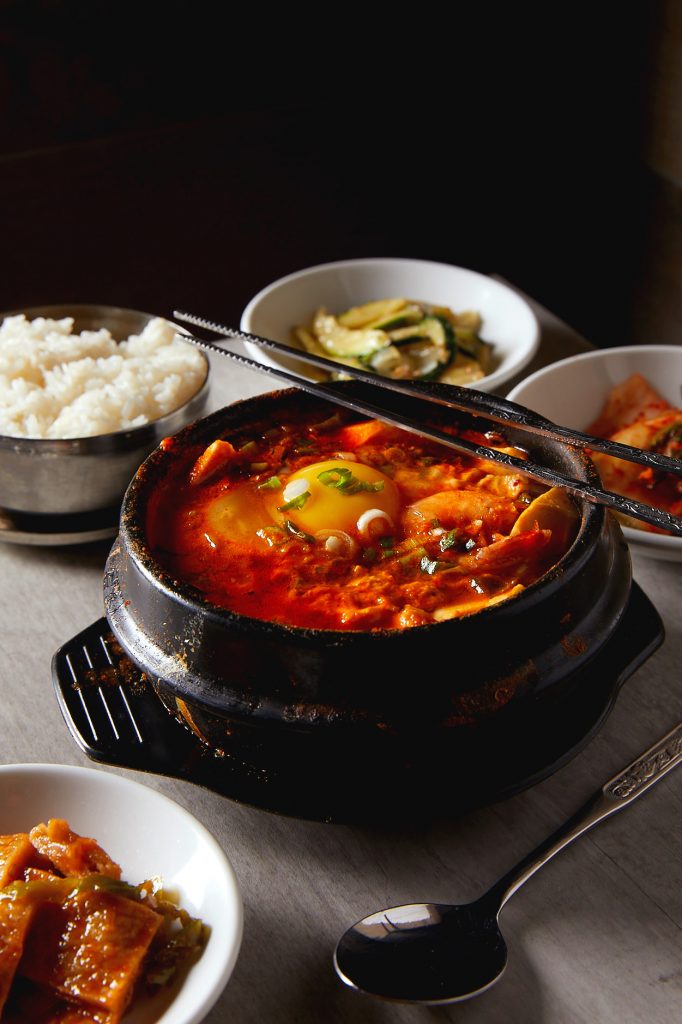 I love this place. I have, not since the minute I walked in, but soon after. It does the best Korean food in Center City. It might be the best in Philly, but that’s hard to say because it depends a lot on what you want (modern, traditional, fast-food, BBQ with the grills in the tables, Korean fried chicken which was a fad here for half a minute until we got some and our collective gaze shifted elsewhere), and I’m not even sure if it matters. There are places in Olney that do better galbi, better tofu, stranger banchan, but none that do so much so well as Dae Bak, and with such simple confidence.

So I come back (and back and back) to sit in a corner and watch Korean soap operas on the TV while I pick my way through the little bowls of fish cake and pickled scallions and kimchi that actually tastes like kimchi—hot and sour and gently funky. The banchan (small plates, offered for free) provide both a distraction before the big dishes start arriving and something to play with between bites of bulgogi bibimbap.

If there are two things I’m glad to see at Dae Bak, they’re that big-ass seafood pancake (I’m a sucker for it every time) and the crust that forms on the bottom of the bowl of bibimbap—rice scorching in the dangerous heat when it arrives at the table. Marinated beef, two kinds of dried mushrooms, more kimchi, limp greens, a fried egg—it’s all there, and it’s all good. But it’s that layer of crust at the bottom of the bowl that I’m happiest about, because that’s a sign. A signal that the kitchen (with its veteran crew pulled out of other Korean restaurants, in Jersey) knows what it’s doing. That they’re not dumbing things down or gentling the recipes for customers who look like me. That they’re doing Korean food the way Korean food is done.

But that’s not why I love Dae Bak enough to skip the bao and poke downstairs and the weird late-night buzz of Chinatown bleeding into the first-floor food court. What gets me is the A/V vibe—the dad rock on the radio, the Pioneer Woman on the TV. What gets me is afternoons full of teens eating dumplings and nights where families gather over soju and soondubu. What gets me are the cases of soft drinks stacked by the kitchen door because the place is too small to contain everything it wants to do and everyone who wants to eat here. It’s the friction—young and old, new and traditional, Korean and American—and the realness of that. The victory in that over any bullshit notions of authenticity in a place as far from Seoul as a place can be.

“Dae bak” is Korean slang for “big win” or “triumph.” It means something good happening out of the blue. And as I sit there, watching the crowds roll in and the crowded streets of Chinatown below me, I get it.

It’s the best name the place could possibly have.