Chaos Theory: At The Table Reviewed

Can a small, modernist BYO work on the Main Line? At The Table is going to find out. 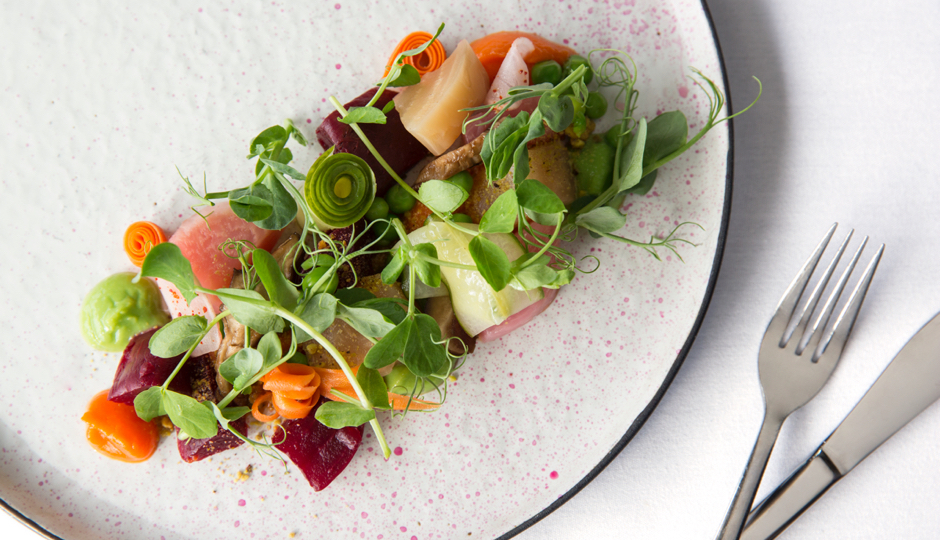 We forget sometimes that every night at a restaurant is the worst night ever.

Not for us, the diners. Not most of the time, anyway. But for the cooks, the chef, the servers, every night is a constantly evolving disaster. Every day starts out perfect—tabula rasa, a clean slate. The tables are all laid. The book is full, with reservations from open to close. In the kitchen, the mise en place is set. The cooks have backups waiting in the cooler, and then backups for their backups.

But when the doors open, everything becomes triage. Table full of vegans, a dropped steak, oven won’t heat past 250 degrees, the sous-chef sneezed in the soup—every minute, it’s something. A chef’s primary job during service is containment—managing the chaos, mitigating the hundred things that can (and will) go wrong and making goddamned sure that no one in the dining room suspects a thing. Dressing up a catastrophe to look like the best night ever.

SNAP JUDGMENT: The Main Line’s own modernist BYOB, elevated by a kitchen that nails the balance between ingredients and technique.

RECOMMENDED: The garden salad, because it defines the restaurant, and the rabbit cavatelli just because its so surprising in this environment.

It’s 8:30 on a Saturday night in Wayne, and at At the Table, they’re already running behind. The floor is fully committed—26 seats and a butt in every one—but the second turn of the dining room is refusing to leave.

“It’ll just be a few minutes,” says the woman working the host’s station, and she gives us a perfect Food Service Smile. The kind that comes with a scream hiding behind it, always silent.

The room is tiny, a former creperie turned now into the Main Line’s own modernist BYO. There’s no place to stand and wait. No bar. No foyer. No matter where Laura and I stand, we’re in someone’s way, so we retreat, take a walk (it’s a beautiful night), and come back 15 minutes later to a floor equally full and tables equally entrenched.

In the end, it takes 40 minutes before we’re seated. And I’m cool with it. There are worse things a restaurant can be than popular. There are worse fates for a floor than to have customers who are enjoying themselves too much to leave. And worse places than At the Table, where the Spanish mackerel comes with bacon snow and the 25-ingredient garden salad looks like it belongs on display at MoMA.

The Main Line has never been a place where anyone looks for culinary innovation, but At the Table doesn’t care about that. It was opened by two chefs, Tara Buzan and her boyfriend, Alex Hardy. She had a cafe and lunch joint once, called A Taste of Britain, then got into catering. He worked in some of the region’s best and most daring restaurants (Marigold Kitchen, Pumpkin, Majolica out in Phoenixville) but was most recently the chef at Rembrandt’s, in Fairmount. Together, they wanted to do something different. Something special.

The kitchen is small, and the menu is tight and controlled. There’s à la carte, plus options for two different tasting menus, both of which simply draw from the available à la carte options, so they aren’t really tasting menus at all. On the floor, Hardy is walking plates to tables. He’s stopping to take pictures, helping to fill glasses. It’ll be almost two hours before I find out why he’s not in the kitchen seeing to his line, but by then, it’ll all make sense. For now, though, we’re seated directly beneath the kitchen’s pass window and handed menus.

“Is this your first time dining with us?”

The salad is one of those things I would make fun of under normal circumstances. The kitchen is so proud of it. They brag about the number of ingredients. The plate is so composed and so designed that it’s more art than food: Still Life With Beets. 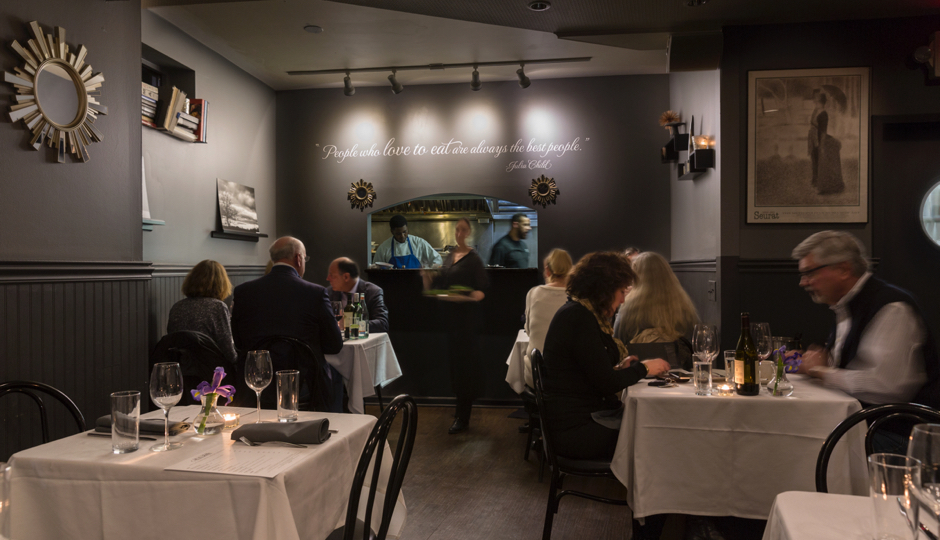 And yet. I’ve eaten dozens of these kinds of plates, these seasonal, modernist garden salads, but this one? It’s one of maybe two or three that I’ve had that are actually good.

A plate like this is all about showing off. It’s an edible manifesto from the kitchen. Inasmuch as At the Table itself is a risk (would’ve been easier to open a hamburger stand, right?), this single dish is its embodiment. The bitter greens, the two kinds of beets (red and golden), the tiny dollops of whipped goat cheese and pickled mushrooms and radish and peas and crunchy specks of pecan—they presented the kitchen with so many opportunities to screw up and only one path to success, which was doing every single little thing exactly right.

Which is what it did.

The beets were smooth and soft, bittersweet and earthy. The chèvre paired perfectly. The crunch of the pecans and the yielding bitterness of the greens complemented each other and the sharp, acid spikes of the pickled mushrooms. And to a certain extent, what followed was simply everything else—the supporting arguments that bolstered the thesis of the salad. This was Hardy’s vision of dinner in the 21st century, modern Americana presented in lush Technicolor. The mushroom bisque was delicious, but so salty it was like Hardy’s kitchen was trying to attract deer. The “Duet From the Sea” was a cloud of disparate ingredients (seared tuna, marinated salmon tartare, cream, brioche, capers, cucumber, more pickling liquid, tangles of greens) brought together by perfect, controlled technique and a sense that if the white space on the plate had been edible, I would’ve been stuffed.

Pea risotto in February would be ridiculous save for the fact that this February feels more like April. I passed it up anyway in favor of cavatelli (handmade by the kitchen) with thin slices of porcini mushroom and fat chunks of rabbit meat, all in a brown sauce that was oversalted (again) but nearly as good as that of any kitchen staffed with pure Italian specialists. The wagyu beef coulotte steak is steak and potatoes, refined. Not re-defined (because who would want that?), but polished. Presented as a series of elements, it had pickled onion, cognac cream sauce, a smoked quarter of potato and the steak, perfectly seared and placed, each idealized and arranged. Taken all together, it was steak and potatoes, only prettier and flawless.

By 10:30, the dining room was still half full, and the cooks in the kitchen were still rocking and rolling. Laura and I were just finishing our drinks when the bill came. The next thing I know, there’s Hardy, crouching next to my table.

“Are you … ” he asked, looking me up and down. And I wanted to say no, because there was no way this conversation, the way it was going, was going to end well for anyone. Because every night in the kitchen is a disaster. You have to remember that. And this night? No different.

But I said yes, and Hardy laughed and scrubbed at his face with his hands. “Oh, man,” he said. “It would have to be tonight. You would have to come tonight.”

And then he told me about tonight’s disasters. The two crew he lost yesterday, his understaffed floor, the overbooking and long waits. He pointed to a young guy standing in the corner, one of his servers. “That’s just a buddy of mine,” Hardy said. “Helping me out tonight.” Hardy had been running plates all night, working the floor and then bouncing back to the line to expo and check in. “My guys,” he said. “I trust them. They’re awesome, but … ”

And he sighs a lot and laughs a lot and paces a tight little two-step course, right there under the pass window beside our table. “Man, just … just tell me. Was everything okay?”

There are restaurants that are purely about ego, and restaurants that are about ego in service to something finer—like dinner. At the Table is the latter. Alex Hardy is a chef who could easily go full mad scientist if he chose to. But his plates are about the ingredients more than the technique. There’s thought, consideration, balance—all those things that pure ego throws by the wayside when it takes over. His crew understands that they’re making dinner for actual humans, not for a photo shoot. And that’s notable, in this age of Instagram. It could so easily have gone the other way.

So on this night, amid all its disasters, I still got service that fought to maintain its veil of cool competence and a meal that was interesting, innovative, daring, precise, and honestly better than I expected. The wait for the table didn’t bother me. The weird tasting-menu arrangement and the salty soup didn’t bother me. I was fascinated by all of it, because how you perform on your worst night tells me so much more than how you perform on your best.

“Sleep easy,” I told Hardy. “It was good, man. You’ve got nothing to worry about.”

And Hardy said okay. He said thank you. He grinned hugely and looked around the room. Then he leaned in close again. He looked me in the eye.

And he asked me if I know what Craig LaBan looks like.

Three stars — come from anywhere in the region.