I Love My Job: PhillyCAM’s Gretjen Clausing On Being David to Comcast’s Goliath

Meet the woman who fights for community access media in Philadelphia. 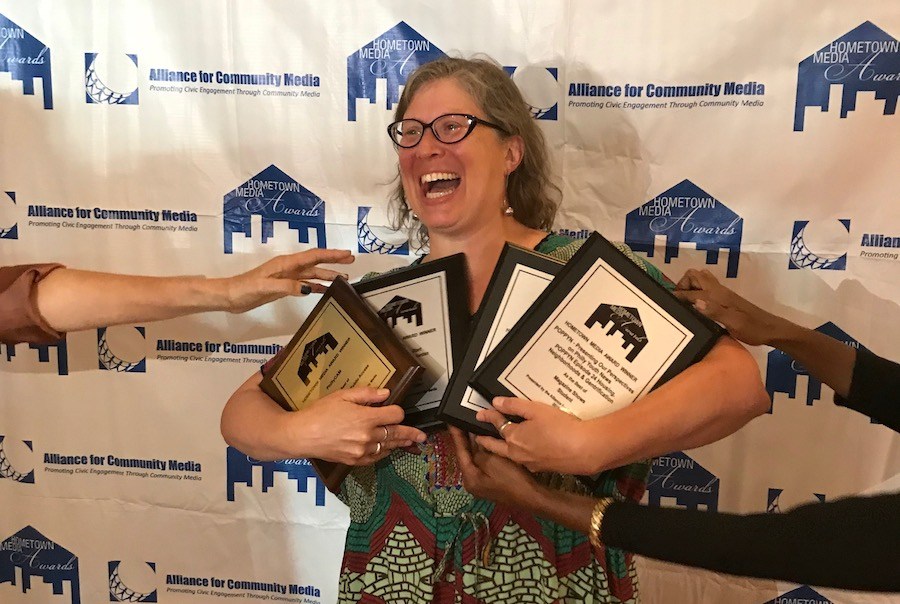 This month, Philadelphia public access cable station PhillyCAM celebrates ten years on the air, while PhillyCAM’s low-powered FM station turns three. We caught up with PhillyCAM executive director and longtime public media activist Gretjen Clausing who tells us all about her battles with the FCC and Comcast and what you should be watching and listening to on PhillyCAM. Four words: Black Tribbles and victrolas.

The spelling of my first name is… Dutch. My father’s father emigrated to the U.S. from Holland, so my first name got a Dutch spelling.

My pronouns are… she and her.

I grew up in… Media, Pennsylvania. [Laughs]. Get it? I grew up in “media.” I love to say that. Womp womp. These days, I live in Roxborough.

For people who have no idea what PhillyCAM is… it is a non-profit that provides a public access TV station and radio station, and we provide access to anyone who lives or works in the city to take classes and make their own non-commercial media and share it here.

If you join PhillyCAM and want to do an alt-right show where you stand there naked and talk about how great Donald Trump is… you have to understand that this is a collaborative medium, and you’ll need to find others to work on the show with you. But we are all about free speech, and we’ve had people with varying points of view who had to figure out a way to work together. We also have some basic programming guidelines, and if your show has mature or adult content, profanity, things like that, we would do it later in the evening.

The biggest enemy of community access media is… the Republican-controlled FCC. They have been chipping away at many areas that affect the public interest, from recent rulings on net neutrality to some upcoming rule-making that affects us. Not long ago, they tried to pass a rule very favorable to the Comcasts of the world that could have potentially eliminated our channel as well as the school district channel, the City of Philadelphia channel, the Community College of Philadelphia channel, and the Temple University channel, but there was so much pushback from all across the country.

The main difference between public access media and public broadcasting like NPR or PBS… is that public access television is only on cable. And there isn’t a gatekeeper. Anybody who wants to create on our channel can do that.

Our biggest supporter in city government has been… City Council. They our the ones who approved the latest cable franchise. That’s the agreement between the City of Philadelphia and cable companies like Comcast and Verizon that requires those companies to provide access to us. We’re actually a very small piece of the public interest concerns in the franchise agreement. Basically, they rely on the public infrastructure to run their cables, and the public needs to get something back.

My management style is… very collaborative. I took one of those personality tests recently, and it said my strength was working with people.

The PhillyCAM budget is… around $1.6 million a year.

The demographics of PhillyCAM membership are… reflective of the city. Majority people of color, and that goes for the staff and board as well. Folks from nearly every zip code. We’ve seen a big increase in the Latinx community of producers and have well over 50 active Spanish-speaking radio and television producers.

I would describe my politics as… being someone committed to progressive causes that put people first. I’ve been checking out all of the candidates on the Democratic side and definitely following Elizabeth Warren closely. Bernie came to PhillyCAM in 2018 to record a show with Larry Krasner talking about criminal justice reform.

To give you a sense of what’s on PhillyCAM these days… there’s our community news program that covers local issues; there’s a new program, Milenio Femenino, which is produced by Latinx women and it’s basically their version of The View, in Spanish; we’ve got the Black Tribbles After Dark — a group of African Americans totally into geek and sci-fi culture; your buddy Michael Coard has a monthly court TV show; and then there’s my guilty pleasure I Love 2 Hustle, which is a family-friendly show that brings people together through line dancing.

My relationship with Comcast is… complicated. I do have folks at Comcast with whom I have had a good relationship, but I wish Comcast overall would embrace the value of community media.

One of the challenges to being a boss in 2019 is… helping people manage their workload and having them keep a healthy work-life balance.

The last book I read cover-to-cover was… The Handmaid’s Tale. I read it when it came out back when I was in college. And I just reread it. I’ve never seen the TV show. I also recently reread 1984, and that is just terrifying.

The best thing about my job is… it’s different every day. Never boring.

The most challenging thing is… navigating conflict. We are a community center, and there are conflicts and misunderstandings. This is the nature of working in a public space.

Membership to PhillyCAM is… $15 to $30 for an individual, and that gets you the ability to submit your own non-commercial content to the television station. And we have lots of training, and a six-week class might cost you $75. You can be trained in operating equipment in three television studies. You can learn how to edit in Adobe Creative Suite. You can learn 360-degree VR video-making, you can apply for a radio show, be a part of a local news team, and if you’re a young person, you can participate in our free after-school youth media program. And, all in all, you get to hang out with tons of really interesting people.

If you’re wondering how the heck to tune in… we are 66 on Comcast and 966 for HD. On Verizon, we’re at 29 and 30, and you can watch us on Roku and Apple TV or livestream the cable channel on our website. The radio station — WPPM — is carried in a five-mile radius of our Center City antenna on 106.5FM. Fergie from Fergie’s Pub has a show on Thursdays from 5pm to 7pm. Keith Brand, the longtime WXPN Sleepy Hollow host has a country program on Tuesday afternoons, and Ricky Paul has this great show here he plays all 45s and it’s a really glorious, upbeat show with an LGBTQ theme. Oh, and I love this one: Talking Machine Hour. Host David Atlas plays 78s on victrolas and puts the mic up to the needle.